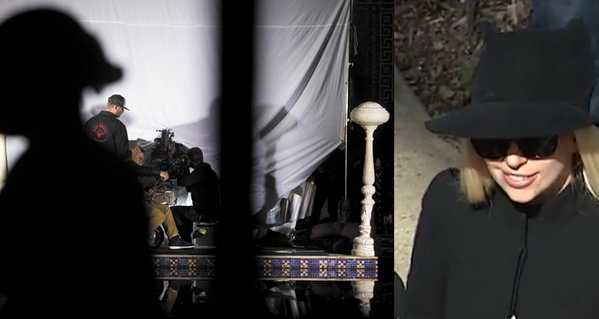 The usually tranquil hilltop estate of publishing mogul William Randolph Hearst was the site of a Hollywood-style video shoot starring pop diva Lady Gaga. The five-time Grammy Award-winner was nowhere to be seen Tuesday – but many of the rough 125 cast and crew members working on her project were.
Dancers and security staff, many bundled in sweaters and coats, strolled the property, which is now a state historical monument. Crew members could be seen spray-painting large inflatable plastic swans in metallic sheens and carrying props such as a giant plaster seashell, antique furniture and garbage bags full of fake flowers.

The hub of activity Tuesday was the Roman Pool, a blue-and-gold tiled indoor pool decorated with statues of gods, goddesses and heroes in the manner of an ancient Roman bath.

At one end of the room, a group gathered around a movie camera in front of a wall-sized white backdrop illuminated by Klieg-style lights while music blared from a stack of speakers. According to Remar Sutton, board member of the Hearst Castle Preservation Foundation, the production planned to film at the Roman Pool on Tuesday before moving on to the outdoor Neptune Pool on Wednesday.
Sutton remained mum about the specific details of the video project Gaga has in the works, but said it’s “the most extensive shoot she’s done.” 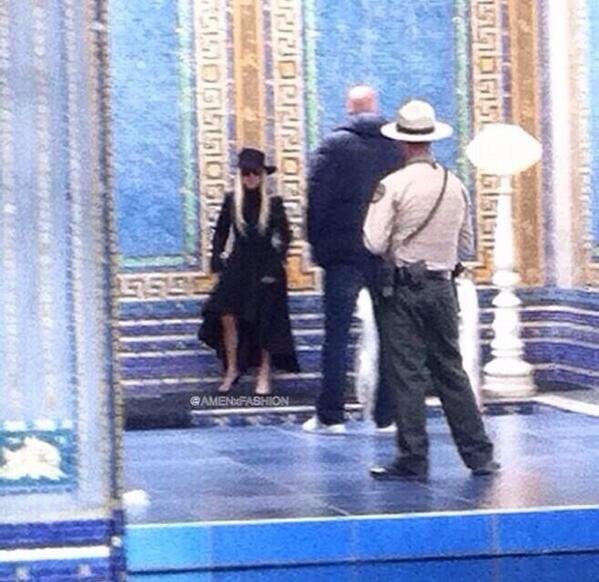 According to Sutton, Gaga first expressed interest in filming the estate Hearst dubbed “La Cuesta Encantada” about three weeks ago. After sending a scouting party, she personally toured Hearst Castle on Feb. 3.

Before coming to Hearst Castle, Sutton said, Gaga’s production crew shot footage in Los Angeles and at the Louvre museum in Paris, where an exhibition showcasing the performer is currently installed. Robert Wilson’s “Living Rooms” features a video of Gaga posing as various works of art, including “The Death of Marat” and “Head of St. John the Baptist.”

Since the Deed of Trust between Hearst Corp. and the state of California prohibits commercial enterprises at Hearst Castle, film shoots are extremely rare. (Part of the 1960 period epic “Spartacus” was shot there.)
“We’ve turned down every single thing. We have never allowed a commercial shoot,” said Sutton, a foundation board member for about 13 years. “The general rule has been ‘no.’”

One of the reasons the foundation allowed Gaga’s shoot is the “extraordinary exposure (the project) will bring to a new generation,” Sutton said, adding that the performer is passionate about sharing Hearst Castle with her fans. “She feels like she can engage young people in art(pop),” he said.