Grace Coddington does NOT deny a Kim K. Vogue Kover 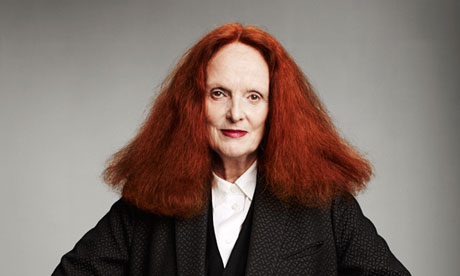 Grace Coddington's got a few trendy tricks up her Celine sleeve. And before taking a seat next to legendary photographer Peter Lindbergh at Wednesday's amfAR gala at New York City's Cipriani Wall Street, she told Pret-a-Reporter her piece of advice for New York Fashion Week newbie designers who are showing for the first time.

"Edit your collection carefully and precisely -- you can do it up until the last moment," said theVogue creative director, who noted she was most looking forward to Marc Jacobs' and Proenza Schouler's shows. As for how to stay afloat amid a slushy NYFW, she said, "Pace yourself. I don't go to all of them."

When asked what she thinks about so many designers dragging editors, bloggers and boldfaces well away from Lincoln Center for their fashion shows -- Alexander Wang made his attendees trek out to Brooklyn's Navy Yard, Diane Von Furstenberg ventured far south to SoHo's Spring Studios --  she told reporters, "I think it's great. I don't like the Lincoln Center. I think it's kind of ugly when you get inside -- not the Lincoln Center, that's great, but inside, that's kind of ugly. I don't like this mass market stuff. I like it when they go downtown to where all the galleries are and things."

She humorously added, "I mean, I wish they'd all show on 22nd Street, which is where I live!"

And when a reporter surprised her with the question about whether Kim Kardashian was just shot for an upcoming issue of Vogue, Coddington -- who also noted that she stays warm during NYFW with "Celine coats of various warmths" and Ugg boots -- widened her eyes and searched for how to respond to the widely-circulated rumor.

"Gosh, I don't know. What can I say?" she said, smiling. "I don't do covers anyway, so I wouldn't know what they have picked out."