Could HBO's latest hit be helping pave the way for a new form of storytelling? 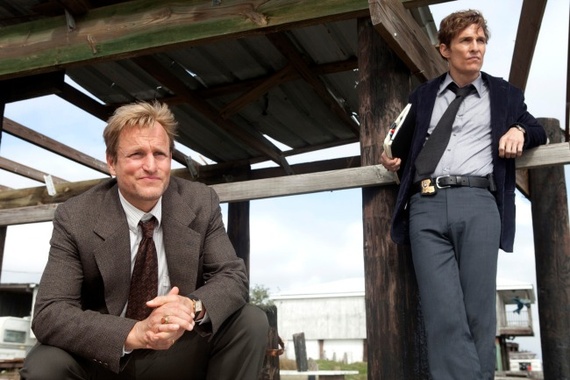 What must David Fincher think when he watches this show?
It’s a thought that first occurred to me in the opening minutes of the series premiere of HBO’s True Detective a month ago, and it has recurred more or less continuously throughout each subsequent episode. The eight-part series, which has just crossed its season midpoint, is Fincherian in the best sense: Zodiac good, Kevin-Spacey-in-the-police-cruiser-in-Se7en good. The resemblance is due in part to the show’s subject matter (the hunt for a serial killer); in part, to its look (crisply cinematic); and, most of all, to its mood: vivid, unsettling, with evil lurking palpably just outside the frame.

So while I have no real idea what David Fincher thinks when he watches True Detective—or whether he’s even watched it at all—I can’t help but imagine he must think something along the lines of: How can it be that I have nothing to do with this show?

Which is a long way of saying that True Detective is the most compelling series currently on television, one that boasts an almost embarrassing array of riches: a mesmerizing performance by current Hollywood It Man Matthew McConaughey; an only marginally less notable turn by co-star Woody Harrelson; an intricate structure and hyper-literate dialogue by writer/creator Nic Pizzolatto; big-screen-worthy direction by Cary Joji Fukunaga; and an anthology format that has the potential to help change the way high-end television is produced.
The show is presented in alternating narratives set 17 years apart. In 1995, two homicide detectives—Rust Cohle (McConaughey) and Martin Hart (Harrelson) investigate a series of apparent serial killings in southern Louisiana. Flash forward to 2012, where the two former partners, both now retired from the force, are themselves interrogated by another pair of policemen (Michael Potts, Tory Kittles) regarding their conduct in the long-ago case.

The result is a relatively conventional (though masterfully executed) procedural mystery nested within a broader meta-mystery. It is clear from the start that Cohle and Hart successfully closed their original serial-killer case in 1995. But it is equally clear that the present-day investigators are reopening the case, and subjecting the detectives’ accounts of its closure to skeptical scrutiny—Cohle’s in particular.

And who can blame them? The Cohle of 1995 was an odd enough character, a brilliant misfit prone to rococo outpourings of evangelical nihilism. But the ensuing years have not been kind. Cohle’s ill temper and philosophic inclination are still in evidence, but his purpose has been leeched away. In place of the spare, clean-cut obsessive who would work all night on a case is a grizzled burnout making his way through Lone Star beers with arithmetic efficiency in the interrogation room.

Hart is a more common type: a swinging-dick cop, capable and popular around the station; a family man who’s not quite ready to be just a family man. His metamorphosis from one side to the other of the show’s 17-year chronological canyon may not be as severe—his hairline has receded, and he’s left cop life for a “security firm”—but as becomes clear over the first four episodes, he, too, is now a different man.

The pairing of Cohle and Hart, the misanthropic genius and the “ordinary” observer who set his eccentricities in context, is not a novel one, of course. Holmes and Watson are the classic prototypes—unless one tries to reach all the way back to Don Quixote and Sancho Panza—and Patrick O’Brian’s Maturin and Aubrey seem even clearer models for Pizzolatto’s detectives. (I’d be astonished if he did not have them in mind when he created the characters.)

But while the pairing isn’t entirely new, it is nonetheless sublime. In interviews, Pizzolatto has declared that he has no interest in serial killers, that the situation that gives rise to True Detective is just that: a situation, an excuse to bounce his leads off one another—the clear-eyed zealot and the self-deluding everyman—under extreme pressure. (Call it a “sit-dram.”) Yes, there are times, particularly in the first couple episodes, when Pizzolatto lays McConaughey’s dialogue on a little thick, with the “paraphilic love maps” and “smell[ing] the psychosphere” and so on. (To whit: this, among many other comparable parodies.) But this is language that takes delight in itself, for itself. If you cannot appreciate Cohle’s describing the illusion of selfhood as “a jury-rig of presumption and dumb will” in episode three, well, this may not be the show for you.

McConaughey continues his run of great recent performances (Mud, Dallas Buyers Club, The Wolf of Wall Street). He has pared himself down physically from his surf-hunky days courting Kate Hudson, but more than that he has pared down his craft, finding virtue in stillness. As he’s thinned out, he’s discovered new depths. Harrelson’s role is in some ways, the more difficult: the straight man, the narrative afterthought. But he, too, underplays neatly, in particular as Hart’s older self. Possibly the show’s most intriguing mystery so far is neither the 1995 killings nor the 2012 re-investigation, but the question of what exactly happened in 2002—an era we have not seen, and one that I do not expect we will—when Hart and Cohle suffered an undisclosed but irreparable rupture of their partnership.

Pizzolatto is cunning in his scattering of such narrative breadcrumbs, his teases of events yet to come. We first heard about “that big throwdown in the woods” in episode two, but have yet to witness it; the stunning final shot of episode three (itself approached, then retreated from, minutes earlier) promised a confrontation that still lies ahead.

Yet perhaps the greatest revelation of True Detective lies in its decision to have all eight episodes shot by the same director, Fukunaga (and, to a somewhat lesser degree, the same cinematographer, Adam Arkapaw). Customarily, top-tier shows—The Sopranos, The Wire, what have you—vary directors over the course of a season, and I’d occasionally been surprised at how little difference it seemed to make, episode to episode. What didn’t occur to me (though it should have) is that the multi-director format essentially requires the suppression of directorial style, a deliberate—and necessary—aiming for the lowest common denominator.

The genius of True Detective (again, somewhat obvious in retrospect) is that having a single director entails granting him license to direct. Fukunaga, moreover, is a talent on the rise: I still haven’t seen his 2011 adaptation of Jane Eyre, but his 2009 debut feature, Sin Nombre, was a stunner. It is certainly no coincidence that True Detective is the only television show I can recall ever watching and thinking, over and over again, I wish I could see this in the theater. Fukunaga’s compositions are clean and meticulously balanced; his aerial shots and use of landscape superb (I loved the container ship passing in the background in episode three, with not a sliver of blue water in view); and the pyrotechnical panache of his six-minute, continuous-shot conclusion to episode four—well, the closest comparison that comes to mind is a similar bravura scene engineered by Alfonso Cuaron in Children of Men.

It is True Detective’s limited, eight-episode story arc—if there are future seasons, as seems likely, they will feature different stories and different casts—that enables the signing of talents such as McConaughey, Harrelson, and Fukunaga. (And that benefit is in addition to solving the hanging-around-one-season-too-many malady that has afflicted so many of television’s best shows.) Cinemax is evidently aiming for something similar with the Steven-Soderbergh-directed, Clive-Owen-starring miniseries The Knick later this year. It’s a format that could prove to be the next big step in the ongoing migration of talent from the large screen to the small.

What else can I praise about True Detective? The title sequence—it’s a small thing, but it serves as a tremendous place-setter, moody and evocative. The song, “Far From Any Road” by The Handsome Family, finds a perfect balance midway between honkey tonk and satanic hymn. And the visuals, by Elastic, not only advertise that the Louisiana locale is the show’s third principal character, but also hint at its corrosive effect on the other two.

Could True Detective go astray in its latter half? Of course. That’s always a danger, and in this genre more so than most: a puzzle is, after all, only as good as its solution. But all signs to date seem promising, even the modest correctives that seem already to have taken place. The stately, gothic mood-setting of the first couple of episodes—a kind of dark-magical realism—has accelerated somewhat as the case unfolds, and conventions that might have proven confining have been disrupted. The first three episodes, for instance, all closed by zeroing in on present-day Cohle; the fourth telescoped outward to a (literal) helicopter’s-eye view of chaos unfolding on the ground in 1995. Where will future episodes veer? I don’t know. But I can’t wait to find out.