After the Chili Peppers' instantly infamous "unplugged" performance at the Super Bowl, we revisit some notorious acts of fakery

Fake It Till You Make It 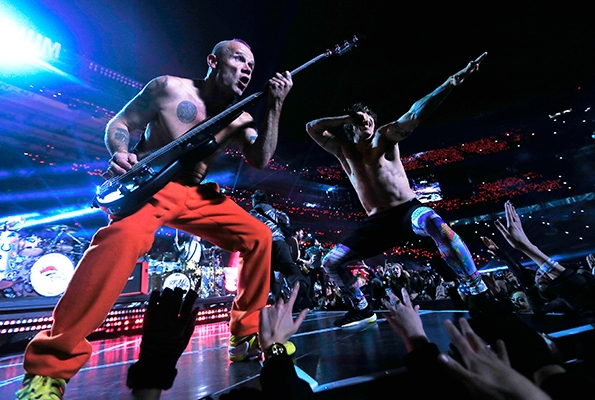 During this past weekend's Super Bowl halftime show, a few eagle-eyed people among the hundreds of millions watching at home noticed something odd about the Red Hot Chili Peppers' performance: No cords or cables were plugged into Flea's bass or Josh Klinghoffer's guitar. After a brief uproar, Flea admitted in an open letter, "When we were asked by the NFL and Bruno [Mars] to play our song 'Give It Away' at the Super Bowl, it was made clear to us that the vocals would be live, but the bass, drums and guitar would be prerecorded," he wrote. "I understand the NFL's stance on this, given they only have a few minutes to set up the stage, there a zillion things that could go wrong and ruin the sound for the folks watching in the stadium and the T.V. viewers."
But, of course, there is a long history of our favorite pop stars only pretending to sing and play. Here are some of the most embarrassing, funniest and just plain weirdest instances of musicians demonstrating their miming skills.

Beyonce Sings (Sorta) to the President
In an incident that threatened to overshadow President Barack Obama's second-term inauguration, liberals and conservatives briefly agreed on one thing: Beyoncé lip-synced her rendition of "The Star-Spangled Banner." After a social media outcry, Beyoncé finally admitted that, yes, she did use a prerecorded track, but only because the frigid Washington, D.C. temperatures in January would have affected her performance. "I am a perfectionist," Knowles said. In a press conference leading up to her Super Bowl halftime performance, Bey treated the press to a jaw-dropping rendition of the National Anthem, effectively ending this scandal.
Britney Gives Viewers Less of "Gimme More"
The 2007 MTV Video Music Awards were supposed to be Britney Spears' big comeback after taking a hiatus to have kids and marry (and divorce) Kevin Federline. Instead, Brit's listless performance of "Gimme More," with the singer unable to both dance and lip-sync along with her new single, was universally panned and perhaps triggered a series of events that led to Spears' mental breakdown early the next year. "She was extremely nervous. It's been awhile since she's done this, and she was performing in front of all her peers, on live TV," a source close to Britney said after the disastrous performance. "She just got out there and froze."

Milli Vanilli Sync Their Careers
Milli Vanilli. Perhaps the most infamous and most embarrassing lip-synch in history comes courtesy of Milli Vanilli, a German pop duo consisting of male models Rob Pilatus and Fab Morvan. Hot off winning the Best New Artist Grammy, Milli Vanilli were recording a concert special for MTV when the backing track for their hit "Girl You Know It's True" kept skipping, revealing that the duo were not singing live. In fact, they weren't singing at all; it was later revealed that neither Pilatus nor Morvan actually sang on their debut LP. The duo were subsequently dropped from their label Arista and forced to vacate their Grammy win on their way to becoming one of music's biggest punch lines.
Ashlee Simpson Misses the Point of 'Saturday Night LIVE'
Another Vanilli-esque career-killing incident befell Ashlee Simpson following her musical performance on an October 2004 episode of Saturday Night Live. Either Ashlee or her band missed their opening cue, but that didn't stop whoever was in charge of Simpson's prerecorded vocal track from pressing play. Knowing that her secret was exposed, Ashlee danced an awkward little jig before jetting offstage, leaving her band to perform an instrumental version of "Pieces of Me." "I'm so sorry. My band started playing the wrong song, and I didn't know what to do, so I thought I'd do a hoedown," Simpson explained.