Uproar as 'Japanese Beethoven' Mamoru Samuragochi exposed as a fraud 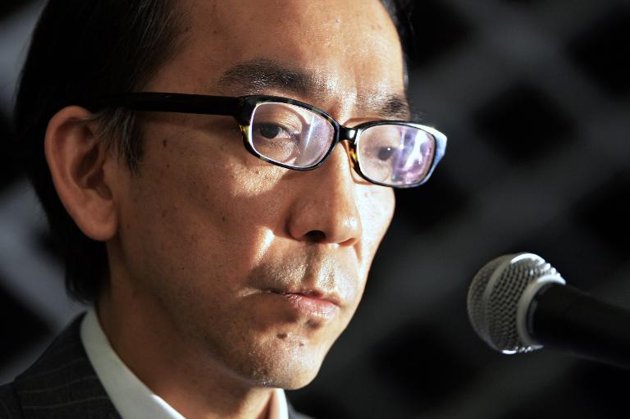 A celebrated composer hailed as a "Japanese Beethoven" for creating hit symphonies despite his deafness has been exposed as a fraud, after confessing another musician wrote his most acclaimed works.
And in a surprise twist, the man who says he was the ghost-writer of the works, Takashi Niigaki, claimed in a press conference Thursday that he did not believe the acclaimed composer was deaf at all.
Niigaki told reporters in Tokyo that over the past 18 years he had been paid about 7 million yen (about $69,000) to write more than 20 pieces to order for popular classical composer Mamoru Samuragochi.
Niigaki, a lecturer at the prestigious Toho Gakuen School of Music, said that at no stage did he believe Samuragochi was deaf, as the composer had repeatedly listened to and provided feedback on the music he contracted him to write over the years.
Samuragochi is viewed as an inspiration in Japan for having created popular classical symphonies and video game scores, despite reportedly having been completely deaf for 15 years.
Niigaki said he had entered into the arrangement with Samuragochi lightheartedly, but subsequently grew concerned about the deception, and told Samuragochi he wanted out.
But he said Samuragochi told him he would commit suicide if he stopped composing for him.
Niigaki said he considered himself an accomplice in the deception. "I can't fool the people any more," he said. He said the last time he had seen Samuragochi was on December 15 last year.
"The office for Samuragochi's lawyers, Kazushi Orimoto and Mizuki Wakamatsu, told CNN they were unable to respond to Niigaki's claims.
But when approached by a reporter for Nippon Television, Orimoto said on camera that the firm believed Samuragochi was indeed deaf, and had a government-issued certificate which confirmed his hearing impairment."
Earlier, they had issued a statement on behalf of Samuragochi, in which he apologized for having "betrayed fans" by having commissioned another composer to write his scores for years.
In the statement, Samuragochi claimed he provided the broader ideas for the works, while the collaborator had produced the finished scores.
The collaborator had his own reasons for not identifying himself as a creator of the work, read the statement, so Samuragochi presented the work as a solo creation.
The lawyers' statement said that while their client "should offer a direct apology to his fans," he was too "mentally disturbed" by the revelations to express himself properly.
The 50-year-old composer, who also spells his name Samuragoch, came to prominence for his ambitious symphonic soundtracks for popular video games, including "Resident Evil."
His most popular work, "Symphony No 1, Hiroshima," dedicated to the victims of the 1945 atomic blast, became a symbol of Japanese resilience in the wake of the 2011 tsunami, after it was featured in documentary by public broadcaster NHK which portrayed the composer traveling to the disaster zone.
Samuragochi had claimed he relied on his perfect pitch to compose after losing his hearing, telling TIME magazine in a 2001 profile that "if you trust your inner sense of sound, you create something that is truer. It is like communicating from the heart. Losing my hearing was a gift from God."
His confession prompted apologies from NHK and his record label. "We were shocked by the news and deeply infuriated," said a statement from Nippon Columbia Co., Samuragochi's label, adding that the composer had previously assured the company that he was the creator of the works.
Daisuke Takahashi, an Olympic bronze medalist figure skater who is planning to skate to one of the works in Sochi, has also become embroiled in the saga. He issued a statement saying he had been unaware that Samuragochi was not the composer of the work, but intended to use the composition regardless.
Niigaki acknowledged he had wavered over the timing of his revelations due to the impact it may have on Takahashi's Olympic preparations, but decided to proceed anyway.
The potential impact on Takahashi's Sochi ambitions from the controversy was a major talking point on social media, with many users complaining about the timing. Others noted that Samuragochi had built an irresistible "modern Beethoven" myth around himself that the public had lapped up.
"I wonder how many people truly love his music?" asked Twitter user @kenichiromogi.