Criminal Minds Boss on JJ's "Heartbreaking" Secret and What's Next 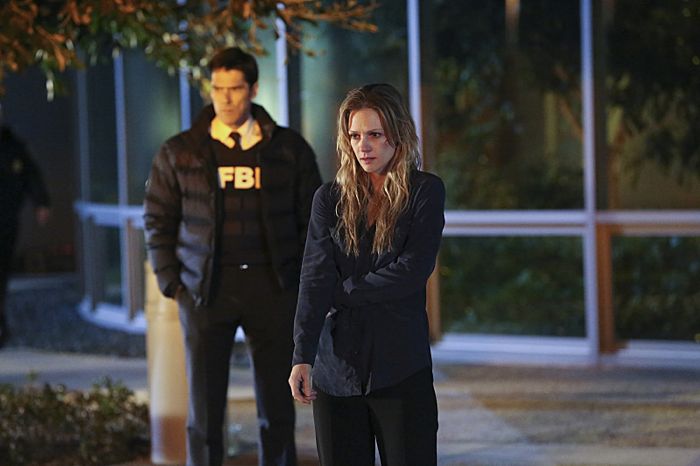 [WARNING: The following story contains spoilers about Wednesday's episode of Criminal Minds. Read at your own risk.]

The truth is finally out.

JJ’s (A.J. Cook) mysterious work with the State Department was finally revealed on Criminal Minds‘ 200th episode Wednesday — along with her and Cruz’s (Esai Morales) big secret: She suffered a miscarriage while on their mission.

Back in 2010, the two were on a covert op, headed by Strauss (Jayne Atkinson), in Afghanistan along with Michael Hastings (Tahmoh Penikett) and Tivon Askari (Farah Tahir). JJ finds out she’s pregnant there and only shares the news with Cruz, who later has to break it to her that she lost the baby after their car came under attack while en route to a location.

That’s only half the story though. Their mission is compromised when JJ’s informant is killed by a double agent. With help from Prentiss (Paget Brewster) — to whom JJ revealed her actual job during the Doyle ordeal — in the present day, we learn Hastings and Askari are the inside men who also kidnapped JJ and Cruz to get their security codes to access top-secret files. The BAU, of course, saves them in the nick of time (though Cruz does get stabbed), and after a rooftop battle, JJ flings Hastings off the ledge to his death.

So what’s next for JJ? And how did her backstory come together? Executive producer Erica Messeranswers our burning questions.

You’ve said that you had the “JJ gets kidnapped” plot in your head for a year. Did you also conceive of the whole arc then too?
Erica Messer: We had talked about it. … We saw the beginning of this episode a year ago, let’s put it that way. In fact, it was going to be the episode Thomas [Gibson] directed last year, but it felt more finale-worthy or premiere-worthy than middle of the season unless it’s the 200th episode! We started talking about what happened to JJ when she was away from us and if that could be the thing that comes back to haunt her. JJ came back much stronger. She came back a profiler, and you can tell something happened in the year she was gone that’s changed her for the better. It felt like, “Let’s take this opportunity in that milestone episode to show what this was like for her.”

Did you always plan on having her miscarry? Was that twist important to her backstory?
Messer: Yes. The next thing for me was the emotional step. Professionally, things can change you, harden you, make you better, make you stronger. But personally, what happened to her? … Strauss sets it up that she’ll be going back and forth from the States — I just pictured her finding out in a med tent in Afghanistan that she’s pregnant and as many casualties of war, she loses the baby in an explosion. It’s heartbreaking and tragic. For me, for a female hero on our show, it’s a story we’re not going to tell present day. It’s too hopeless in a sense if we say she’s pregnant and take it away.

Miscarriages are a pretty common TV trope.
Messer: Right, and I think the way we did it, it shows that it’s something that changed her and made her stronger. The audience doesn’t have the chance to fall in love with the fact that she’s having a baby since this was in 2011 and we know JJ didn’t come back with another baby. I felt like it was an important part of her character to have something she wanted and lost because of this, and it’s not because of chasing serial killers but because of a bigger role she played as an American hero.

Did you tell A.J. and Esai what their secret was early on?
Messer: When we introduced Cruz, I told A.J. and Esai, “This is your history. You were the only one there who knew the loss that she endured and that is a connection that you have with somebody that you can’t explain. It’s just emotional. It’s not romantic, but just the bond you have. He’s a major character in your life because he was there for that.” Everybody sort of read into it as an affair. They care for each other, but not like that.

Will (Josh Stewart) didn’t know, but it’s implied at the end that she finally told him. Why did you decide to have him in the dark
Messer: A.J. and I talked about this quite a bit. I don’t want to be generalizing women by any means, but one of the many strengths of women is that you carry on. We talked about, “Did she tell Will?” We both decided that it would’ve just hurt him. He never knew she was pregnant, so he never lost anything. It felt like it would’ve been putting him through an unnecessary pain at the time, so she just kept it to herself. It was like, “What you don’t know won’t hurt you.” It was done in more of a protective, nurturing aspect vs. “I’m going to keep a secret from you.” By the end of the episode, you feel like she’s told him. The team still doesn’t know though.

What’s JJ and Cruz’s relationship like going forward? Fewer whisper-y conversations, I assume.
Messer: Exactly! [Laughs] They had that nice moment at the end. We don’t have him back probably until our finale, but they are going to be working together and he’s still the section chief. They’ll be less secretive.

Is this whole story line done?
Messer: Yeah. Hastings and the other guy are dead. That’s done. We had toyed with bringing an element of that back in the finale, but I think we’re going to start fresh. The whole story line started with Cruz being made section chief, which we now know was to draw out these two terrorists. He said then that he had heard rumblings about their old case being reopened and I think this closed it nicely.

Last time you did something like this with Prentiss and Doyle, some of the team, Reid (Matthew Gray Gubler) especially, felt betrayed by Prentiss’ secret. What’s their reaction going to be like now?
Messer: We’re not going to play the betrayal aspect that we played with Prentiss — one, because we did that and I think we did it well with the Prentiss arc, but two, it was a matter of State secret. JJ was on a need-to-know assignment that she could never tell anyone about because since it would put them in jeopardy. It’s more “We’re happy to have her back.” There’s no anger.

How will this affect JJ when she returns to work?
Messer: She’s had a couple weeks off when we see her again. I think there’s a relief you feel at the end of the 200th. There are no more secrets, no more lies. That chapter is closed. You feel that in the end when the team is altogether. We add these layers to our characters that we tap into when we need to, so there won’t be a big aftermath episode, but there might be moments here and there later on that affects her. She comes back tired, but she does her job and she’s fine.

Paget had a pretty big part in this one. Do you have any plans for her to come back again yet?
Messer: She’s a breath of fresh air! We really wanted to focus on Prentiss and JJ’s friendship, and I think we found a way to show how close they are. I don’t when she’ll come back again. We can’t have her back all the time and Paget’s doing her own great things. We’re so happy for her.

ONTD, what did you think of Criminal Minds‘ 200th episode? AJ Cook making her own stunts in this episode invites you in.