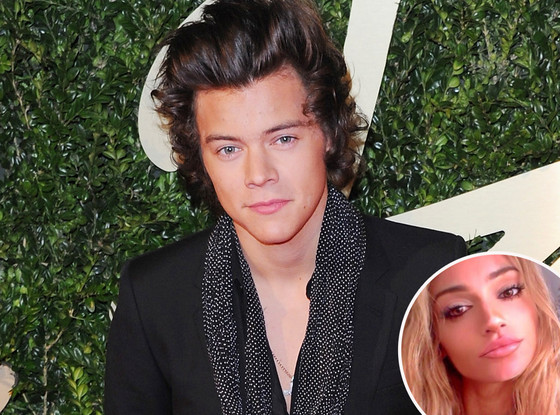 Does Harry Styles have a new lady in his life?
Earlier today, romance rumors hit the web claiming that the 20-year-old One Direction singer had begun dating Pat Benatar's 29-year-old daughter Haley Giraldo.
"They met in Los Angeles last year at a One Direction concert and have seen each other on the sly anytime Harry's been back in town," a source told Star magazine. "They talk almost every day when he's in London and he sends her lots of romantic gifts. They've been trying to keep it on the down-low."

Adding fuel to the romance fire is a Twitter pic that Giraldo shared back in August of her and a girlfriend posing with the Brit boy-banders. She captioned the group shot, "So much fun seeing these cuties of one direction kill it in concert. @Harry_Styles @onedirection @Real_Liam_Payne."
But don't worry 1D fans. Styles and Giraldo are not getting hot and heavy. "It's completely false," a rep for the band tells E! News of the false dating rumors.
And if you need any more proof that the twosome aren't an item, Giraldo took to Twitter to address the romance rumors. "Where do they come up with such crazy stories w zero merit! U keep ur personal life private, and people just make up there own stories!" she wrote earlier today. " "Where do they come up w this s--t and why me ugh," she went on, adding, "Last thing im going to say addressing this. Whoever is spreading lies needs to stop. It's really not ok."
As for the photo of Styles and Giraldo, a source tells E! News, "Haley's mom got her tickets backstage for a One Direction show and that's how she met Harry. It was through the music connections...They weren't hooking up at that time but stayed in regular touch. They are often speaking to one another and they also Skype. There is definitely a connection there."
Meanwhile, Styles has been rumored to be romancing Kendall Jenner. Styles and Jenner have hung out several times, most recently getting cuddly during an Eagles concert in L.A. last month.
source
I never heard this rumor...