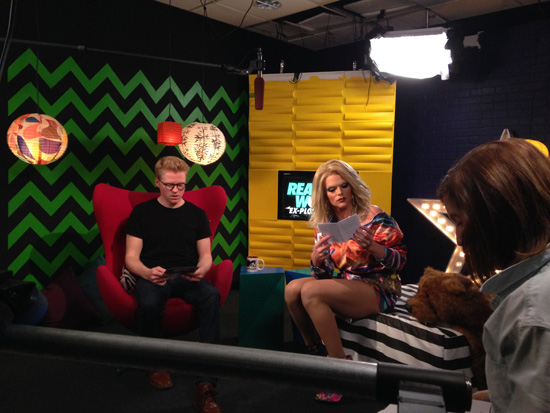 ☺ @RuPaul. so @MTV made me their new whorespondent! Thanx 4 pickin up the rock I was under & lettin the world find me http://t.co/SGhT7u4cIp

With last week’s invasion of the exes, this season of “Real World” is about to get rully, rully MESSED UP…in the best way possible, of course! And to complement the crazy s**t that’s about to go down in the house, we here at MTV.com are premiering the ultimate after-dinner treat. Immediately following tonight’s episode of “Ex-Plosion” is our “Real World S#!t Show,” starring series alum Chet Channon and drag queen sensation/self-proclaimed “YouTube ass-hat” Willam Belli (you may recall her face — and long, sexy legs — from “RuPaul’s Drag Race“). The four-episode series will feature cast interviews (our first guest being the beautiful, bodacious Jenny, pictured in the behind-the-scenes pic above), relationship experts/”Best Week Ever” tag-team Frangela, who will dole out their two cents on everything from cheating to friends with benefits, a limp bear and MUCH s**t-talking. Check out these set photos for a glimpse of the fabulousness that’s to come, and don’t miss the premiere episode tonight at 11/10c on MTV.com!