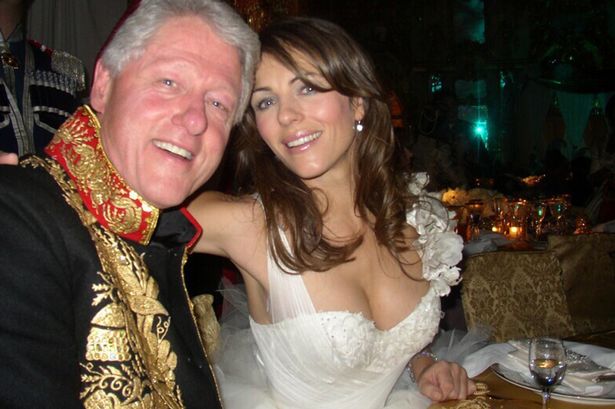 Extraordinary claims Elizabeth Hurley had a year long affair with President Bill Clinton after he flew her to Washington for sex, have surfaced in the U.S.
During their first secret tryst his wife Hillary was asleep in the next room.
The astonishing claim comes after a tape of the actress's former boyfriend Tom Sizemore was found describing how he set Hurley, 48, up with the Clinton following a private screening of Saving Private Ryan at the White House in 1998.
Although the actress took to Twitter to furiously deny the rumours, telling her 450,000 followers: "Ludicrously silly stories about me & Bill Clinton. Totally untrue. In the hands of my lawyers. Yawn."

The then President called the actress saying "Elizabeth, this is your Commander-in-Chief. I'm sending a plane to pick you up in three hours. Is that enough time?"
Hours later she is said to have arrived at the White House where charismatic Clinton gave her a personal tour before showing her Lincoln's bedroom.
According to Radar Online the meeting was arranged after Clinton asked Sizemore, 52, if he was still in touch with his former girlfriend.
When the actor said he was, Clinton said: "You got her number don't you?”

Actor Sizemore, who appeared in the Steven Spielberg film, said yes. "He then takes his phone out and goes 'Give it to me?'" explained Sizemore.
In audio recording obtained by the US website, the actor said he perhaps should ask Hurley first if he can give out her number to which Clinton replies "You dumb mother******. I'm the Commander-in-Chief of the United States of America. The buck stops here. Give me the damn number."
When he called her, she at first appeared coy but Clinton charmed her saying: "Listen Elizabeth, this is the President. I don't have any time for the ****. I'm keeping the world from nuclear war all the time. I'm sending a plane to pick you up”.
Sizemore claimed it was the first night they politician and actress slept together.
The actor described Clinton as "6ft 4 with more charisma than 1,000 Brad Pitts".

It was the start of a year long affair only called off by the President after he said he was falling in love with her. Clinton, 67, and Hilary, 66, had separate bedrooms in the White House. Hurley has made no secret of her attraction to Clinton.
She once admitted that she has a secret fetish for powerful politicians. However this afternoon Liz branded the claims "ludicrous". She tweeted: "Silly stories about me and Bill Clinton. Totally untrue."
The 'Austin Powers' star has confessed that she lusts after world leaders including former U.S. President Bill Clinton and ex-Prime Minister John.
"Powerful folk can be sexy. I adore Clinton; you know, naughty but nice with a very sexy voice,” Hurley once said.
In 2001 the pair reportedly spent an evening  at a luxurious beach house in Santa Monica, where they reportedly wiled away a few pleasant hours shooting pool and playing cards. Clinton's aides are quick to point out that there were other famous guests at the house, including singer Sheryl Crow.
However, Clinton's spokesperson Julia Payne confirmed Clinton and Liz have met before and said that everybody had a 'good time' at the gathering.
Liz today denied claims of an affair with the ex-President, saying they were "ludicrous".

Ludicrously silly stories about me & Bill Clinton. Totally untrue. In the hands of my lawyers. Yawn.