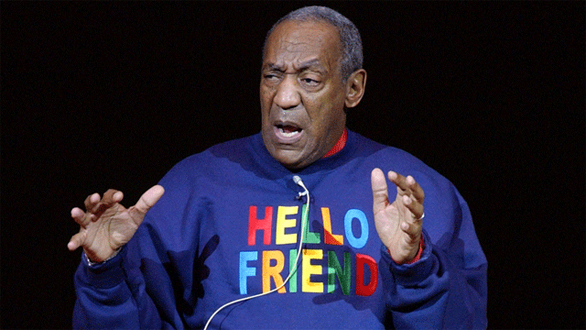 The thing about Dylan Farrow's open letter accusing her father, Woody Allen, of sexual abuse is: There was not much really new about it. It was new that Dylan Farrow herself was signing her name to the accusations, but Vanity Fair had covered the case, in grim detail, more than two decades ago.

So the current crisis over how people are supposed to feel about Woody Allen is on some level odd. Woody Allen's status as an accused child molester has been a matter of public record since before Manhattan Murder Mystery came out. Anyone who didn't think about it before now had chosen not to think about it.

Not thinking about it is a popular and powerful choice. Which brings up another beloved American funnyman, Bill Cosby. Who doesn't love Bill Cosby? I grew up watching Fat Albert and eating Jell-O Pudding Pops, which is a cliché, but Bill Cosby is the creator of some of our most warming and affirming clichés. He is charming and iconic, one of the most culturally important and successful comedians ever, an elder statesman of the entertainment industry.

He's also someone who has been accused by multiple women of drugging them and sexually assaulting them. Here is one of his accusers, describing an incident:

Well, there were a number of people at the table, friends of his, and he said to me, yes, you do seem ill, you're slightly feverish, would you like to have some Contact? You know, the cold medicine. And I thought, why not, can't hurt. So he went into some sort of office area at the back of the restaurant and he produced two capsules in his hand. I thought nothing of it and I took the capsules. In about, I don't know, 20 to 30 minutes I felt great and then about 10 minutes after that I was almost literally face down on the table of this restaurant...

He said, "Oh my, you must be more ill then we believed. I totally lost motor control; I was almost unable to hold my head up. I was very, very, very stoned. He took me into my apartment and then very helpfully and nicely was prepared to take off my clothes and help me into bed and pet me, and that's how the actual assault began.

She recounted this in an on-camera interview, under her own name, with Matt Lauer of the Today show, on February 10, 2005. The assault had allegedly happened back in the 1970s, but she said she had decided to come forward because another woman had accused Cosby of committing a similar assault in January of 2004.

That woman, in a lawsuit, said that Cosby offered her three pills of what he claimed was "herbal medication, which would help her relax," and insisted she take all three:

When Plaintiff advised Defendant she did not feel well, Defendant led Plaintiff to a sofa, because she could not walk on her own, where he laid her down, under the guise of "helping" her.

Subsequently, Defendant positioned himself behind Plaintiff on the sofa, touched her breasts and vaginal area, rubbed his penis against her hand, and digitally penetrated her.

Plaintiff remained in a semi-conscious state throughout the time of this ordeal.

At no time was Plaintiff capable of consent after the pills affected her, and at no time did she consent to Defendant's acts.

Lawyers for the woman filed a motion stating that they intended to call as witnesses the woman who'd given the Today show interview and nine separate Jane Does, from seven different states. Eventually the list grew to a reported 13 accusers. Two more of them put their names on the record, giving interviews to Philadelphia Magazine and later to People. Philadelphia summarized one of their stories:

They started an affair that lasted about six months. Cosby ended it without explanation. Then he called her one night in Denver, where she lived; they met backstage at a nightclub there, where he was performing. He said, "Here's your favorite coffee, something I made, to relax you." She drank it and soon began to feel woozy. Several hours later, she woke up in the backseat of her car, alone. She didn't know what had happened. Her clothes were a mess, her bra undone. Security guards came and said Cosby told them to get her home. She confronted him at his hotel. "You just had too much to drink," he told her.

The other accuser initially withheld the details of her story because of the pending lawsuit. Cosby ended up settling the suit, with the plaintiff agreeing not to discuss it further, after which the prospective witness went ahead and told her story to the magazines. Here's People's account, using her name, Barbara Bowman:

It was in a hotel in Reno, claims Bowman, that Cosby assaulted her one night in 1986. "He took my hand and his hand over it, and he masturbated with his hand over my hand," says Bowman, who, although terrified, kept quiet about the incident and continued as Cosby's protégé because, she says, "Who's gonna believe this? He was a powerful man. He was like the president." Before long she was alone with Cosby again in his Manhattan townhouse; she was given a glass of red wine, and "the next thing I know, I'm sick and I'm nauseous and I'm delusional and I'm limp and ... I can't think straight.... And I just came to, and I'm wearing a [men's] T-shirt that wasn't mine, and he was in a white robe."

A month or two later, she was in Atlantic City and says she was given another glass of red wine and felt "completely doped up again." Confused, Bowman somehow made it back to her room, but the next day Cosby summoned her to his suite. After she arrived, Bowman says, Cosby "threw me on the bed and braced his arm under my neck so I couldn't move my head, and he started trying to take his clothes off. I remember all the clinking of his belt buckle. And he was trying to take my pants down, and I was trying to keep them on." Bowman says that not long after she resisted the assault, Cosby cut off contact with her and had her escorted to the airport for a flight back to Denver.

To reiterate: This was in People magazine, published nationwide in December 2006. Four women said publicly, in major media outlets, that Bill Cosby had drugged and sexually assaulted them. This coverage was more recent and possibly more prominent that the coverage of the abuse allegations against Woody Allen.

And? Basically nobody wanted to live in a world where Bill Cosby was a sexual predator. It was too much to handle. The original Philadelphia Magazine story set off his accusers' testimony in italicized interludes, between long sections about the more digestible controversies around Cosby's lecture tour denouncing black cultural pathology. The usually unflinching Ta-Nehisi Coates, in an otherwise comprehensive 2008 Atlantic essay on the context and politics of Cosby's performance as a public moral scold, dropped a sentence about the lawsuit settlement and its accompanying accusations into parentheses near the end.

Conceptually, it was the sensible way to deal with it. No one was talking about it anymore. The whole thing had been, and it remained, something walled off from our collective understanding of Bill Cosby.

With shocking speed, it was effectively forgotten. When the subject came up today, more than half the Gawker staff had no memory of any sexual allegations against Bill Cosby. In 2009, Cosby was awarded the Mark Twain Prize for his distinguished achievements in humor. In 2010, he was honored with the Marian Anderson Award, for "critically acclaimed artists who have impacted society in a positive way, either through their work or their support for an important cause." In 2011, the Marian Anderson Award went to Mia Farrow.