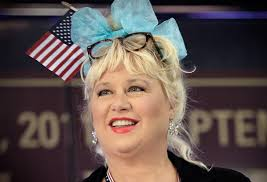 Former "Saturday Night Live" cast member Victoria Jackson has filed to run as an independent candidate for a seat on a county commission outside Nashville, Tenn.

Jackson, who calls herself a tea party conservative, moved to Thompson Station in Williamson County last year. She told The Tennessean she filed as an independent because she's "very disappointed with the Republican Party (because they're too liberal)."

As long as Jackson meets the candidate qualifying requirements by the Feb. 20 deadline, her name will appear on the election ballot Aug. 7.
She would run against the Republican nominee, who will be chosen May 6.

In honor of Victoria Jackson, I've compiled a list of her funniest moments (hint: they have nothing to do with SNL).

Also known as "There's a black man in the WHITEhouse."

Fox News. The only network with the truth.