A Taylor Swift superfan had to be bundled away by security after storming the stage during the singer's concert at the O2 Arena.

The 24-year-old singer kicked off her European leg of her RED tour in London, and had just performed her hit song, We Are Never Getting Back Together' when the man leapt onto the stage.

He ran up a flight of steps towards the bemused singer, dressed as a circus ringmaster, and appeared to push something into her hand before running back toward the audience. 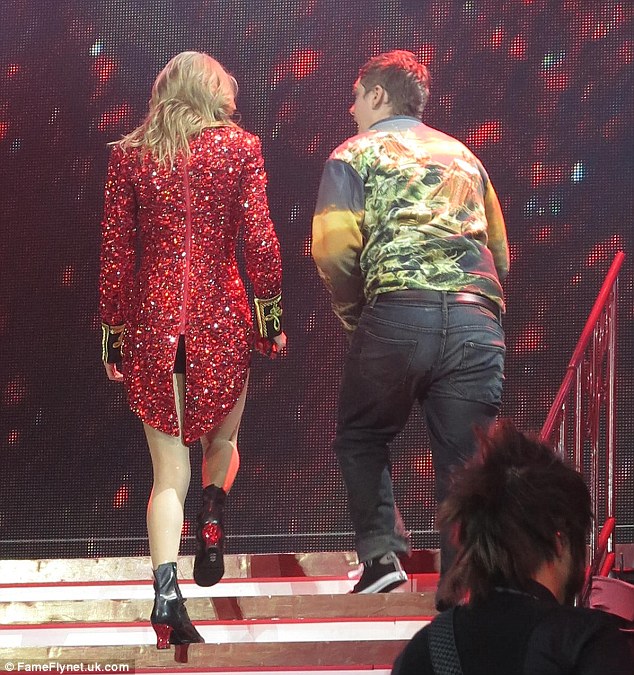 Fan club: A fan stormed the stage just for the chance to meet Taylor

Security men managed to grab the young fan as he headed back to his seat.

Members of the audience thought the man was a dancer until he tripped running up the stairs.

The incident came at the end of Saturday's performance, on what was the first of Swift's five nights at the O2.

Eyewitness Andrew Simpson, 49, from Portsmouth said: 'It was an extraordinary breach of security. I couldn't quite believe what I was seeing.

'It happened during the final song of the concert when Taylor was dressed as a circus ringmaster.

'As a finale to the final song 'We Are Never Getting Back Together' she walked up a set of steps to leave the stage.

'As she stood there to soak up the applause a guy suddenly appeared on the stage.

'At first I think the audience thought he was one of the dancers. But as he ran up the stairs he stumbled and it was quite clear that something really wasn't right.

'He got to the top of the stairs and Taylor looked pretty bemused as he tried to say something to her.

'He then pushed something into her hand, which she took. It was at that point a security guard came racing up the stairs at full speed.

'He grabbed the guy and dragged him down the stairs.

'When he reached the bottom another security guard joined in and they pulled him off the stage and led him away.

'There were a lot of kids and young girls at the concert and I don't think they could understand what had gone on.

'I was at the concert with my wife and my daughters who are aged 13 and nine and they were pretty shocked by what they had seen.

'My nine year old asked me why a strange man had run on stage and why he had been pulled away. She couldn't make any sense of it.'

Swift thrilled fans with her set, which included I Knew You Were Trouble, 22, and Love Story.

more pics at the Source

this is NOT OKAY! he ran a really long way to get to her...that whole security team needs to get fired...