Jerry Seinfeld On Diversity In Comedy: "Who Cares?"

During a BuzzFeed Brews with CBS This Morning interview, the former Seinfeld star and co-creator said it is “anti-comedy” to approach the genre like it’s “the census.” 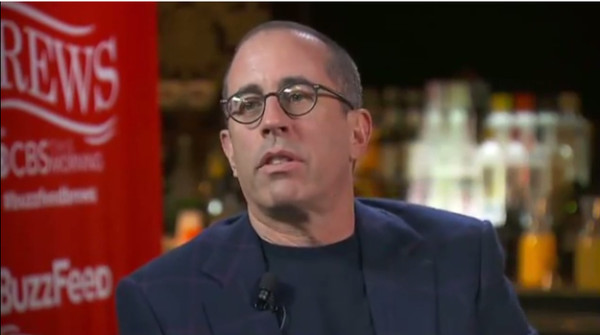 At the height of Seinfeld’s popularity, the NBC comedy was repeatedly accused of presenting an exclusively “white” view of its diverse New York City setting. During Jerry Seinfeld’s BuzzFeed Brews with CBS This Morning interview on Monday, BuzzFeed Business Editor Peter Lauria asked about the enduring criticism, which has carried over to his Comedians in Cars Getting Coffee web series. The Crackle docu-comedy featured white male performers (like Larry David, Ricky Gervais, Alec Baldwin, and Michael Richards) in the first batch of episodes, but later included Sarah Silverman and Tina Fey.

“People think it’s the census or something,” Seinfeld said of the assertion that all pop culture should accurately reflect society. “This has gotta represent the actual pie chart of America? Who cares? Funny is the world that I live in. You’re funny, I’m interested. You’re not funny, I’m not interested. I have no interest in gender or race or anything like that.”

Seinfeld went on to say that approaching comedy through the lens of race or gender or sexuality are “anti-comedy.” “It’s more about PC nonsense than, ‘Are you making us laugh or not?’” he said.

Watch this video below to hear Seinfeld’s complete thoughts on the subject, which was fueled by a conversation he previously had with Fey about women in comedy in a recent episode of Comedians in Cars Getting Coffee.