'Dookie' at 20: Billie Joe Armstrong (aka MY KING) on Green Day's Punk Blockbuster 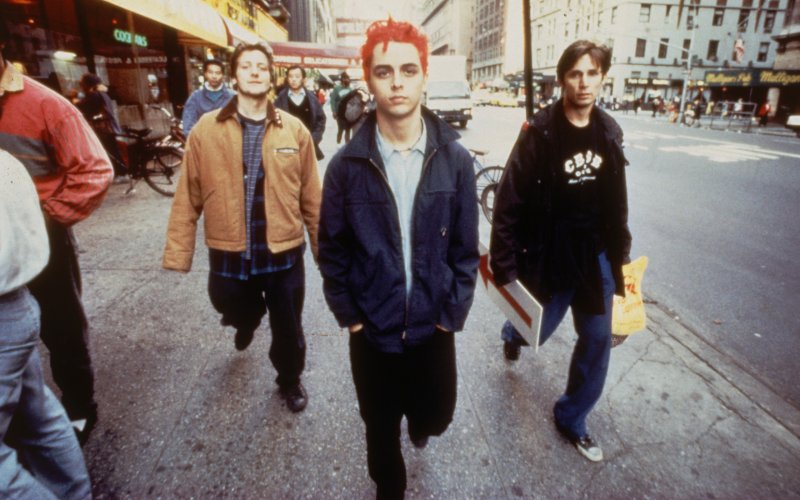 "Back then, I just wanted to write songs I could be proud of and be able to play in five years," Green Day singer-guitarist Billie Joe Armstrong says, recalling his state of mind exactly 20 years ago – on February 1st, 1994, the day his band's third album and big-record-deal debut, Dookie, was released. He has another, earlier memory, just after Green Day got their advance money from Reprise Records, part of the Warner Bros. company, which issued Dookie and is still Green Day's label. "I remember thinking," Armstrong says, "'Let's just record this thing, and make sure we have money left over, so we can pay our rent, in case anything happens."

Look back at Green Day's career in photos

This is what happened: Armstrong, bassist Mike Dirnt and drummer Tré Cool became overnight rock stars. Dookie rapidly went platinum, then double platinum, ultimately selling more than 16 million copies worldwide and firing Green Day out of their hometown hardcore-punk underground in Berkeley, California, into arenas and stadiums. With 11 studio albums, including the 2004 multi-platinum opera, American Idiot, Green Day are now the most successful punk band in the world.

Armstrong, Dirnt, Cool and Warner Bros. chairman Rob Cavallo – who, as a young A&R rep, signed Green Day in 1993 and co-produced Dookie with them – all spoke at length for a forthcoming Rolling Stone feature on the road to Dookie, its creation and dramatic, commercial aftermath. What follows are exclusive excerpts from my conversation with Armstrong, who remains amazed by that record's original and continuing impact. "Our fans have those times – 'Where were you when you first heard 'Basket Case'?" he says. "That's all I wanted – people to be affected by it, with as much passion as I put into it."

When did you notice major labels sniffing around? Your second album, Kerplunk!, came out on the independent Lookout label in January, 1992, right after Nirvana's Nevermind went to Number One. Were you were riding the tailwind?

I remember [Lookout founder] Larry Livermore saying there were majors calling him. We ignored it. We didn't know what it meant. We thought it was prank calls. There were a lot of those second- and third-rate Nirvanas and Soundgardens around – we didn't fit that mold. The labels weren't really looking for us.

In fact, they were. You became the subject of a three-way bidding war between Geffen, Columbia and Reprise.

We had a pretty large following. But nobody knew what that following was, because it was all about these super-small fanzines, kids booking us into local veterans halls. The guy from Geffen looked at me: "You sold out City Gardens [in Trenton, New Jersey]?" We were also selling out the Whisky A Go Go [in Los Angeles]. Even the people at Warner Bros. were like, "Holy shit!"

This was a critical turn in your future. What were band meetings like? And how did you ultimately decide to go with Rob Cavallo and Reprise?

We were probably stoned. I gotta say that. We were always high [laughs]. It was this foggy process of elimination.

But we had a clear idea of what we wanted to do: "I'm playing my 'Blue' guitar [his first, serious instrument, a Stratocaster copy received as a Christmas present when he was 11 years old]. Mike is going to get the best bass sound. I want to use one amp. That's all we need." That's how we ended up making the record.

You recorded at home, in Berkeley, but at a major studio, Fantasy. That was a big step up in technology and decor from your early records. Did you feel you belonged there?

It definitely had that Seventies coke-y vibe, mahogany and strange dead wood around the place. We would go into the vaults and see all of Creedence Clearwater Revival's master tapes.

But I felt we belonged there. Our first album [1990's 39/Smooth] cost $700 to make. Kerplunk! was like $1200. "Let's record these as fast as we can – because we don't have a choice." [Laughs.] This time, I learned how to dial in good sounds, get the best guitar tones. I was able to take a little time doing vocals. I loved that experience.

Was everything written and ready to be played when you walked in?

We lived at this place at Ashby and Telegraph [Avenues] in Berkeley. We had this room we shared with another band, the East Bay Weed Company, and there were people we knew upstairs. The whole house was communal living. And we rehearsed there every day.

When we got home from touring for Kerplunk!, I had a four-track [recorder]. I was dicking around with it, making demos, just with myself playing. I came up with "She," "Sassafras Roots," "Pulling Teeth" and "F.O.D.". That helped create the stripped-down sound. I'd record a song, and if I didn't have a bridge for it, I would just play another verse. Then I'd show the songs to Mike and Tré.

What was the first song you played on the first day in the studio?

It was probably [the opening track] "Burnout." There were nerves. We felt like little kids in a candy store. But Mike and Tré were tight. That album was some of the tightest they'd ever played. We were ready. We didn't want to be one of those bands that got stuck in the studio. We heard about record labels telling bands, "This is what's wrong. Make it again" – horror stories about spending all this money. We were like, "Fuck that shit. We're going to record this and be done."

What were you learning about yourself as a songwriter, as you wrote and recorded the songs on "Dookie"? On the indie LPs, just getting the songs down was paramount. But "Longview," "Basket Case," "When I Come Around" and "She" would be on the radio, performed at the biggest shows you had ever played. What Green Day did was no longer just about speed; it was about lasting impact.

For me, it was important to have an opinion – and to be an individual. There was a lot of whining in rock at that time. By nature, we're extroverts. So that's what came across in our songs. We knew we were entering an arena of bands that we didn't like [laughs]. It was important for us to be ourselves, no matter what, and have a devil-may-care attitude about it. Fuck it – life is pretty silly.

But there is nothing silly in the lyrics to "Basket Case" [about Armstrong's panic attacks], "When I Come Around" [about his relationship with his future wife Adrienne], or "F.O.D." [a/k/a "Fuck Off and Die"]. They suggest the guy living the songs wasn't as happy as the one making the record.

I think so, starting from the opening line, "I declare I don't care no more" [in "Burnout"]. I was getting high a lot. It was a gloomy feeling. You're looking for someone to acknowledge your insanity. "F.O.D." was just about seeing a particular person and I'm gonna beat the shit out of them. I laugh about it now. But they were real feelings. Everything felt so crazy. When we were on an indie label, it felt comfortable. Now, in a lot of ways, I was feeling like I'd burned down my home.

"Basket Case" became this loser national anthem [laughs]. But to say it's about panic attacks is limiting. It's about going through total confusion. I think of a song like "American Idiot" as feeling, OK, there is a lot of chaos in the world, people getting murdered. There is no way to make sense of a world like that. You feel like a victim of it. "Basket Case" is the same way.

Why did you turn the gender around in that song's third verse? The whore is a "he".

I wanted to challenge myself and whoever the listener might be. It's also looking at the world and saying, "It's not as black and white as you think. This isn't your grandfather's prostitute – or maybe it was." This record touches on bisexuality a lot.

That is especially true in "Coming Clean." It starts with the line, "Seventeen and strung out on confusion." Were you 17 when you wrote it?

No. It could be any number. It was a song about questioning myself. There are these other feelings you may have about the same sex, the opposite sex, especially being in Berkeley and San Francisco then. People are acting out what they're feeling: gay, bisexual, transgender, whatever. And that opens up something in society that becomes more acceptable. Now we have gay marriage becoming recognized.

Did you come to any conclusions, through that song, about your sexuality? Or were you just interested in the questions?

I think it's a process of discovery. I was willing to try anything [laughs]. But I got married to Adrienne a year after that.

That was mental. Dookie comes out in February [1994]. I got married in July. I was very impulsive at that time. I think that impulsive behavior was meant to counteract the chaos in my life.

What's in a Name

Was naming your first, big album after excrement a mistake? I'll be honest: I had a hard time initially, getting past the juvenile thing to the songwriting inside.

I think a lot of people did, although people got warm to it. Obviously, it was a stoner thing. It really was. We were smoking a lot of weed. "Hey, man, wouldn't it be funny if . . ."

But I was thinking about that Sonic Youth record, Goo. When we gave the title to [cover artist] Richie Bucher, he was like, "OK." We get it back, and it's dogs exploding shit all over Berkeley. [Laughs] I don't know, man. It was one of those impulsive moments. And we were like, "Fuck it."

Actually, the art was too good and funny, crammed with jokes, for a CD booklet.

You can see [AC/DC's] Angus Young on there, the woman from the first Black Sabbath album cover.

I like the dog pouring a bucket of shit from a roof, onto a woman below going, "Oh! My latté" – surely a jab at yuppies overrunning radical punk-rock Berkeley.

There's a lot of hometown stuff. There was a guy who used to jog around – he's in there. There was a photographer at 924 Gilman Street [the Berkeley-punk coop where Green Day played many of their early shows]. He's in there.

It suggests that for all of the backlash you got in the hardcore-punk community for signing to a big record company, your first major-label album wasn't so far from your underground roots and ideals.

Anything someone said about us – I don't hold it against them, Maximum RockNRoll or anybody. A lot happens in 20 years. They gotta change too. They have to be responsible for the shit they do.

All I can do is be responsible for the shit I do, whatever happens. Their opinions. . . most people don't even think like that anymore. I can't hold someone's 15-year-old self against them forever.

What are your memories of first hearing Dookie? Fav songs?