Will.i.am: 'the music industry is delusional' 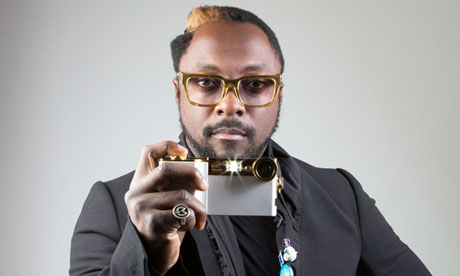 Black Eyed Peas frontman and entrepreneur says he's saddened that labels 'don't make hardware anymore'
"Our music sells other people's hardware, and it's a hard pill to swallow," said will.i.am at Midem on Saturday. Speaking via Skype, the Black Eyed Peas frontman called the music industry “delusional”. "I try my hardest not dwell on it, so I try to focus on my philanthropy.”
Will.i.am pointed to the successive decline in revenue from recorded music that the industry has experienced for more than a decade as a reason to get into the hardware business. He said he had made more money from his equity in Beats Electronics – the makers of Beats by Dr Dre headphones – than what he made from Black Eyed Peas' I Gotta Feeling, the most downloaded song of all times on iTunes.

“Record labels should not compete with other labels – they should compete with Samsung, with LG,” he said. “I challenge you to challenge those you think you probably shouldn’t go up against. That’s what Dr Dre did with Beats.”
The global music superstar, entrepreneur and philanthropist later told the Guardian that the world had seen the transformation going on today before, a hundred years ago, during the industrial revolution. "African-Americans weren't part of that conversation back then," he said. "What we're seeing now is the technological revolution – and inner city kids should be a part of that conversation."
That's why Will.i.am launched the TRANS4M initiative, which is part of the i.am angel foundation he launched in 2009. The foundation’s aim is to promote and expand education in the areas of science, technology, engineering, arts & athletics and mathematics (i.am STEAM), by providing scholarships, financial literacy and college preparation for underprivileged young people.
In 2012, he brought TRANS4M to the UK, working with the Prince’s Trust, as it didn’t have a STEAM programme at the time.
He said that going back to Boyle Heights, the LA neighbourhood he grew up in, inspired him to “give back”. “I wanted to do more than reaping the money and the fame, and live the way the videos and magazines suggest successful artists should live.”
“Why wait for an earthquake or hurricane or tornado for someone in the music industry to wake up and use their success to focus? Every day there’s an earthquake or a hurricane, and no one pays attention. I wanted to address everyday urgent things that aren’t in Rolling Stones or the latest hot blog."
Growing up listening to Public Enemy, KRS 1 and Rage Against the Machine, will.i.am said that his impression of what hip-hop should be was “each one to teach one” and “fight the power”. “It has stopped being that,” he continued. “Look, artists don’t have to rap about [transforming their neighbourhood] – my latest song doesn’t reflect my philanthropy – but you should use the power you have to go and fix it.”
He has said that he only sleeps about four hours a night, which allows him to invest time in a vast number of projects, including launching his own self-funded i.am+ consumer electronics business last year, serving as Intel’s director of creative innovation, creating and co-founding the Coca-Cola company’s EKOCYCLE recycling strategy, and founding and hosting the TRANS4M conference – as well as write, produce, record and perform music and being a judge and mentor on BBC 1’s The Voice.
“This is the new rockstar lifestyle,” will.i.am told the Guardian. “Bono does it. The question is: do you go to the Grammys or to Davos? We know the old definition of the word, but this is 2014 and that is not what I want to be. I want to be a rocket star, see the planet from above and then transform it.”
pot, kettle...