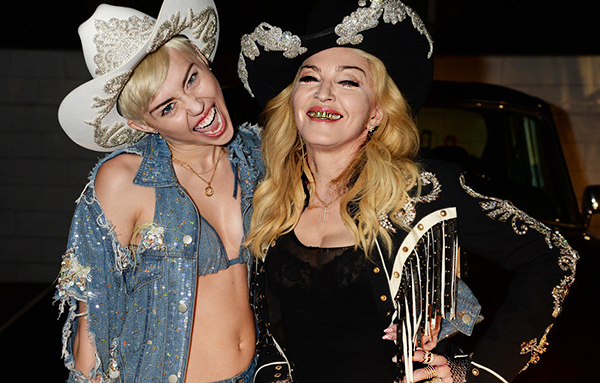 Miley Cyrus and Madonna teamed up for MTV’s ‘Unplugged’ special, but Madge wasn’t exactly Miley’s first choice. Awkward.
“I just wanted to have a special guest that would be something that no one saw coming, especially with it being ‘Unplugged,’” Miley C admitted in a recent interview.
As for who she originally wanted to perform with, explained Miley, “I really wanted my [godmother] Dolly Parton to be there. [Dolly] had a show on the day of ‘Unplugged,’ so she wasn’t able to be there, so I was like, who can I bring besides Dolly that would be something like that?”
In honor of her godmother, Miley went on to perform an acoustic version of Parton’s ‘Jolene.’
Having to pick someone else for the show, Miley settled on Madonna because she figured no one would expect her to perform on ‘Unplugged.’
Unfortunately, Madonna’s appearance wasn’t definite until right before the show was set to air. As Miley recalled, “I never knew if it was gonna be possible. We just kind of threw it out there and when I was working on my record I wanted to have her on a song… she was working on her album and then when it was time for ‘Unplugged.’”
We’re glad it worked out because that performance sure had people talking!
source
Tags: madonna, miley cyrus
Subscribe
Previous
← Ctrl ← Alt
Next
Ctrl → Alt →
Previous
← Ctrl ← Alt
Next
Ctrl → Alt →