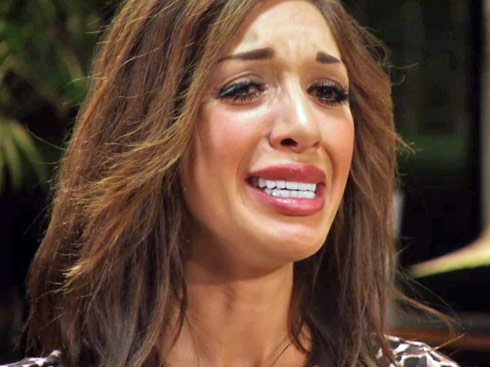 On Thursday's episode of Couples Therapy Dr. Jenn Berman asked Farrah during a group session about trust issues and she opened up about her “sex tape.” She got emotional as she explained:


Sada: I am not judging about the sex tape at all, I don’t think there is anything wrong with the sex industry and I know you said you don’t work in the industry but when we were talking about it you had said to me that it was filmed with one of your boyfriends. I’m just curious which boyfriend that was.

Sada: I’m just curious as to how that was a sex tape filmed at home when there is actually a camera crew filming…

Farrah: No there was not. There was only me and the camera person. So where are you seeing a camera crew?

Farrah: I can straight up, honestly say there was never any other person ever around us when we were having sex.

Farrah: I don’t know if I ever said “camera person.” Putting words in my mouth and stuff, it’s kind of like a touchy subject.

Sada went on to explain that she understood Farrah, that she and her partner had been filmed having sex and it was shown on TV and that she only felt like Farrah should just be honest about what happened in relation to the tape for herself moving forward.

It's amazing how some lesbians judge, make assumptions that are wrong and still think their right.... so difficult to deal with ignorance

I think Kelsey & Ghostface are not a real couple, even ghostface thinks it's not a real thing.....i'm confused, wish them the best

sada is great @ saying "CAMERA PERSON" & putting it in my mouth, I guess I should let others put words in others peoples mouths..can't trust

The rest of the episode featured a number of the cast members talking about the perceived dishonesty she conveys when talking about her sex tape and how it made it difficult for them to trust her.