Harry Styles (and Louis) Mourns the Death of Teenage One Direction Fan: "She Was So, So Lovely" 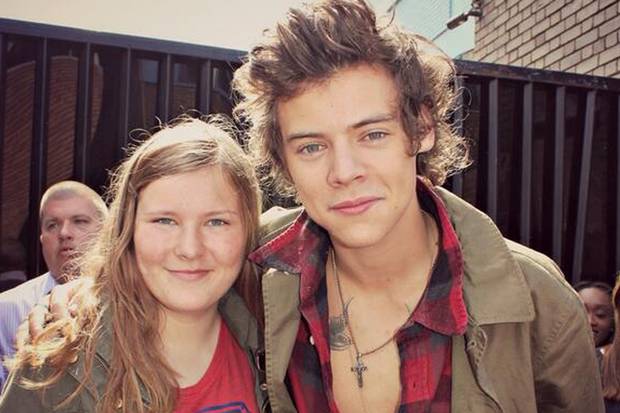 Harry Styles is mourning the loss of a young and very hard-core One Direction fan.
Magdalena (Magda) Szablinska, a 16-year-old from the U.K., suddenly died this week outside her school in Hounslow from what is thought to have been a cardiac arrest. Magda was rushed to a local hospital but doctors were unable to save her.
Earlier today, Styles, who had previously met and took photos with Magda, took to Twitter to share his condolences. "It's incredibly sad to hear the news about Magda," he wrote. "She was so so lovely, i am thinking of her and her family. RIP .xx."
Magda, who ran a 1D fan Twitter account that has over 107,000 followers, had quite a history with the boy band. She had met and taken photos with Styles, Zayn Malik and Louis Tomlinson in addition to actively updating her Twitter account with photos of the band.
Magda's father told the London Evening Standard today, "We are trying to come to terms with this. She was an angel and everybody has said so. So many people have contacted us to pay their respects, she was so loved."
He added, "She liked One Direction and had so many friends on Facebook, she loved school and was very popular and doing very well, she was our star."
This isn't the first time 1D has lost a dedicated fan. Kelcey Hallinan, who lost her battle to cancer this past November, got a posthumous shout-out from Styles after her passing. He wrote at the time, "Incredible attitude, incredible person. R.I.P. KH." 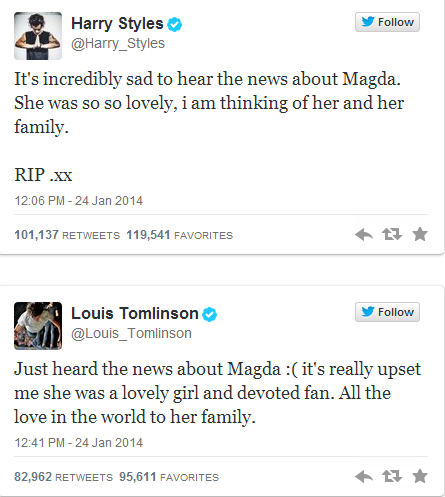