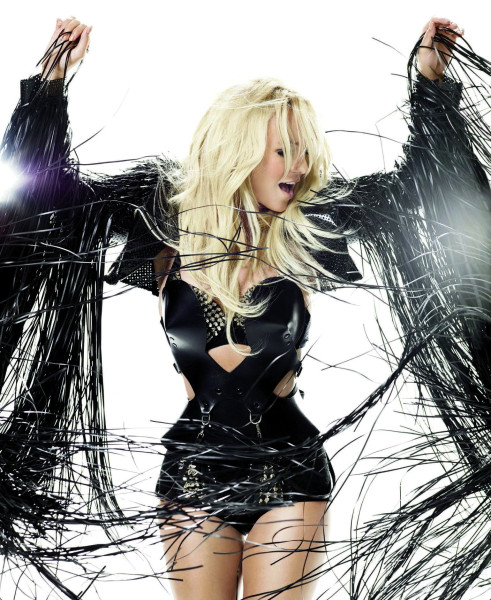 I first met 17-year-old Britney Spears backstage at New York City’s Hammerstein Ballroom in 1999. I was a young Rolling Stone reporter and she was beginning the tour for her first studio album, …Baby One More Time. She was sweet, charming, and—surrounded by handlers—completely inaccessible.

One year later, we met again when I had become the entertainment editor at Seventeen magazine. By then she was an even more unimaginably huge star, but as sweet and unassuming as ever, with the infectious confidence of a child performer whose every move was calculated by the grownups around her.

When I left Rolling Stone for Seventeen, everyone thought I was crazy. But it was the best way to meet Britney: The 17-year-old reader follows the same stars, only without a trace of irony. Britney was loved. Almost 15 years later, Britney Spears—multi-platinum recording artist, fragrance tycoon, Madonna kisser, tabloid staple, mom, and now artist-in-residence at Planet Hollywood—still dazzles me with the energy and innocence of a high school cheerleader.

Britney's Hope to "Live a Normal Life"
Life for Britney is markedly different now. On a typical day, she drops off her two sons at school, heads over to a dance studio for five hours of rehearsal, picks up the kids, then drives home in time to cook dinner. “It’s a grueling schedule,” she admits. It might seem that taking on a two-year commitment to perform some 50 shows per year would add even more strain to an already packed schedule, but the singer imagines that life during her run of Britney: Piece of Me will be—as much as it can be for someone who has sold 100 million albums—rather ordinary. “I think I’ll be able to live a normal life with my kids,” Spears says from her home in Los Angeles with a tinge of optimism in her teenager sweet voice. “I will have some nights where I’ll come back to LA after the show and some when I’ll stay over in Las Vegas.” One activity she’ll be certain to squeeze in during those overnights: pampering. “They have the best spas in Las Vegas—oxygen facials at every one!” 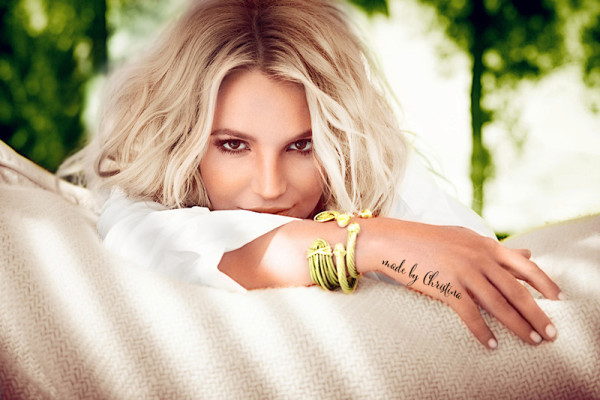 No doubt she’ll earn those spa visits. For the 90-minute show, Caesars Entertainment has built a 4,600-seat venue that it’s touting as the largest indoor immersive projection theater in the world. More than 60 projectors display images across a planetarium-like 280 degrees. A large dance floor has been placed in front of the stage and its runway, so Spears can high-kick all the way into the crowd. VIP tables in front receive bottle service from waitresses in Britney costumes (red latex jumpsuits from the video for “Oops!…I Did It Again,” Catholic schoolgirl uniforms with pig tails from “…Baby One More Time”), but there isn’t a bad seat in the house.

“We wanted to create a Vegas vibe, to encourage people to get up and dance,” says Kurt Melien, vice president and head of entertainment for Caesars Entertainment. “This is not your father’s theater.”

The Business of Britney 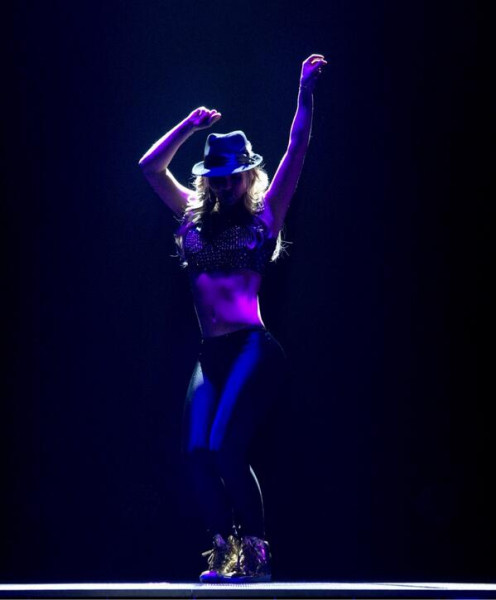 Spears’s residency is part of a master plan by Caesars Entertainment to align itself with the tastes of today’s Vegas visitors, whose average age fell from 50 in 2009 to 44.8 in 2012. For that youth movement you can thank the international obsession with EDM (for those above the mean, that’s electronic dance music, which prevails in most local nightclubs), the upgraded restaurants and shopping venues, and the renewed emphasis on the non-gaming activities that 20-somethings (and younger) arrive in droves to experience.

“When we think of our portfolio of content, we look to mirror that demographic shift,” says Melien. “You have plenty of fans who loved Britney in 1998 with ‘…Baby One More Time,’ and there are people who loved her albums that followed. So you have a wide range, from 20 to 45. A lot of folks who have this memory of the ’90s, they now have kids, and all of them are our core audience.”

So instead of the 30-year-old Bally’s showgirl revue Jubilee!, we’re now getting choreographer Frank Gatson Jr.’s updated version. No more old-lady dance shows; now there’s Absinthe, an adult-themed, burlesque-style circus—with tons of laughs. “All this is going to make a massive impact on Vegas,” says Melien. Although Caesars won’t comment specifically on the production’s cost, the benefit to Britney is a guaranteed $310,000 per show, while selling out the arena would bring Caesars about $500,000 per night. A gamble, perhaps, but if you’re going to come back, and you’re Britney, you do it in grand style.

Saving the Drama for the Stage

Piece of Me is the pièce de résistance of this entertainment revival, which is fitting, as Spears is experiencing something of a renaissance herself. It’s been seven years since the star shaved her head and suffered a rather public meltdown (she has called it her “rocky moment”). Since then, she hasn’t exactly lived in an attic full of cobwebs, but her life in the spotlight has had its dark side: rehab, divorce, conservatorship.

By performing on a Las Vegas stage for two years, Spears has the opportunity to prove—night after night, to detractors and fans alike—not only that this “bitch” still got it, but that she’s grown into a woman who can take control of her life and her world on her own terms.

“When I’m being a mom, I’m mom all the way. I’m worried all the time, and always thinking about what we should be doing and should not be doing,” she says. “But when I’m onstage, it’s like my therapy time. I get to be this person that I’m really not. It’s a way to get out of my own head and have some fun.”

To get the audience into the Britney Zone, director Baz Halpin (whose production company, Silent House, designed Taylor Swift’s Red Tour and Pink’s The Truth About Love Tour) is pulling every trick he can from his magician’s sleeves.

“The beauty of this show is that it’s Britney past, present, and future,” he says. “She performs 21 hits from her entire career, but we’ve left it fluid enough that over the course of the residency, as tracks are released from her new album, Britney Jean, new songs will be added. That was the key. So if you come in December and come back in July, you’ll have a different show.”

The 400-foot-wide screen allows Halpin to create worlds representing various eras in Spears’s 15-year career. “The experience is completely immersive,” he says. “I don’t want to give too much away, but some of the worlds are what the fans have never seen before and some are familiar. We’re paying homage to Britney’s history, so you’ll recognize it, but much will be unexpected.” What you can expect: snow, water, rain, and lots of dancing. “Britney told me that every time she does a show, she really wants to bring it,” says Halpin. “In this stage, the fans feel like they’re in the show with Britney, with a party vibe—15 dancers and hints and moments and flavors from throughout her incredible career.”

The Mother of Reinvention 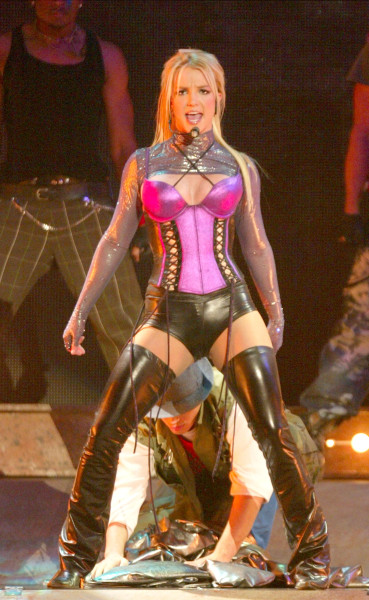 Everyone, it seems, wants to see Spears make a splashy comeback, even those who may not be longtime fans. “There is a phenomenon called a para-social relationship, where you’ve seen someone enough that you think you know them,” explains Pamela Rutledge, PhD, director of the Media Psychology Research Center. “The human brain processes facial features at a primitive level, and seeing those images a lot, we feel close to this person without realizing it.”

We’ve “known” Spears since she was a squeaky-clean kid on The All New Mickey Mouse Club. Then she was the Princess of Pop. Then a sex goddess kissing Madonna. We watched her marry, divorce, marry, have kids, divorce, grow up, fall down. “She has proven herself to be human,” says Rutledge. “And now she is on the redemption part of her story. This is an opportunity for her to show everyone, Yes, I really can sing, I really can perform. It’s a way of her redeeming both her career and her character.” And who doesn’t love a redemption story?

Tickets to the Magic Show

The demand for tickets to Piece of Me has been greater than even Caesars’ Melien had hoped. And once the general admission seats are gone, a special VIP concierge line will still be available—something unprecedented for Ticketmaster. “This will ensure that fans can get tickets,” says Melien. “You can buy front-row seats. You can buy meet-and-greets. We wanted the show to feel exclusive, so we set aside some packages for this special concierge line.”

Las Vegas native Jordan Miller, who runs one of the only Britney-approved fan websites, BreatheHeavy.com, says that many of his 90,000 daily unique visitors are disappointed that Spears won’t be coming to their towns, but some will instead visit her at Planet Hollywood. The 25-year-old blogger points out that Spears is the youngest artist to take up a Vegas residency and that in doing so she is inspiring others. (Rumor has it Adele is considering a long Vegas run in the near future.) He hopes that event coordinators help Spears’s fans under 21 find stimulating things to do during the rest of their Las Vegas stays.

No doubt the theater will be filled with hardcore fans and Spears’s fellow celebrities—like Will.i.am, who produced Britney Jean and deejays frequently in Las Vegas—each time the curtain goes up, but at the time of our interview, the idea of opening night was giving this pop princess butterflies, even after a life lived in the tabloids. “I’ll be really nervous on the first night,” she says with a laugh. “I’m older, obviously, and I think I’m probably a little bit wiser, but I’m way less fearless.
I can’t wait for the first night to be over and move on to the next show.” If her announcement of the residency via helicopter in the Nevada desert on Good Morning America is any indicator, expect a spectacle—and perhaps even the unabashed, un-ironic fan love she inspired as a teen. “At the heart of it all, I want there to be enough dance,” she says. “I want there to be enough singing. And I want it to be magical.”