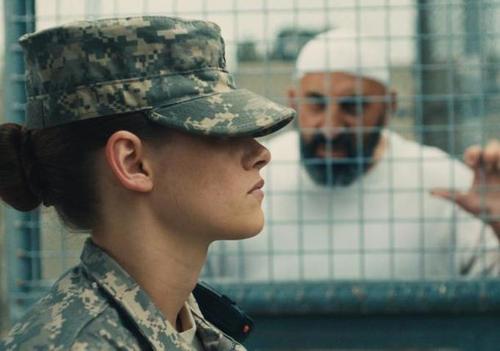 Sundance prides itself on being a place where new talents are discovered, but sometimes it's a place where established talents go to show off new sides. Camp X-Ray isn't the first time Kristen Stewart has tried her hand at "serious" acting, but based on initial reactions, the film, which stars K-Stew as a Guantanamo guard, may be the one that finally helps put Twilight behind her.

Miles Teller, who wowed Sundance audiences with last year's The Spectacular Now, is less of a known quantity, but based on the ecstatic reception for opening night's Whiplash, that won't last long. In the film, he's a driven music-conservatory student who's driven to bloody obsession by a hard-charging teacher played by J.K. Simmons.

Here's what the first wave of critics are saying about both films.

David Rooney, Hollywood Reporter
Ever since the Twilight backlash began, people have questioned whether Stewart is merely a sullen screen queen or a real actor. She puts that argument to rest here, playing a tough, taciturn character driven by an inarticulate urge "to do something important," but steadily awakened by unpredictable reality. It’s a fiercely contained performance, conveying raw personal insights even when Cole outwardly remains clenched in discomfort. There's not a moment Stewart's onscreen here where she isn’t completely transfixing.
Kate Aurthur, BuzzFeed
As Camp X-Ray's story unfolds, and Cole begins to identify with and like Ali, the movie relies on what's become Stewart’s signature awkwardness. And by the film's end, Cole has transformed. If that’s Stewart's goal as well, Camp X-Ray is an excellent start.
Drew McWeeny, HitFix
Maadi captures the rage and the helplessness and the struggle to maintain some semblance of sanity when locked in an insane situation with no end in sight. Stewart manages to etch a very empathetic portrait of a young woman who isn't completely comfortable with what she's being asked to do, and the obvious ambivalence she has towards her hometown that she escaped and the life she's signed up for make her the perfect guide for us through what is a very complicated moral landscape. Camp X-Ray is going to be a hard commercial sell, but the film has a delicate human heart, and it is ultimately rewarding. I think it's a strong indication of what Stewart can do with the right material, and it makes a case for Maadi as one of the most interesting character actors working right now.
Matt Patches, Vanity Fair
You likely have strong opinion on Kristen Stewart's acting abilities. Well, throw that perception out the window. Camp X-Ray is Stewart shedding a skin and allowing herself to be tapped for talent.
Eric Kohn, Indiewire
Before her gig in the "Twilight" franchise turned Kristen Stewart into a global celebrity, she had already established herself as a noteworthy screen presence in much smaller projects, with her serious, distant gaze making her ideally positioned to play lost and frustrated young women. There's a glimmer of that subdued talent in "Camp X-Ray," the debut feature of writer-director Peter Sattler that finds Stewart in the excessively unglamorous role of a Guantanamo Bay guard. Unfortunately, Sattler's frustratingly on-the-nose screenplay — which finds Stewart's character forming an unlikely bond with an uncooperative detainee (Peyman Moadi) — only succeeds at emphasizing her talent in an otherwise half-baked drama.
Rob Nelson, Variety
The two leads are excellent and play off each other deftly. Acting almost exclusively with his bearded face as seen through the cell window, Maadi (“A Separation”) calibrates precisely the character’s mix of humor, anger, despair and endurance. In a turn that will surprise and impress those who know her only from the “Twilight” films, Stewart is riveting, especially in the final scenes, where Sattler reverses the camera’s perspective so that Cole is the one viewed through the window, appearing as a sort of prisoner herself.
Marlow Stern, The Daily Beast
But, by the end of Camp X-Ray, you’re won over by Stewart’s layered turn as Cole, and Moaadi’s as the defiant Ali. It’s a role perfectly suited to her strengths—vulnerability and hidden courage—and few young actresses, with the exception of Jennifer Lawrence, can hold a close-up like Stewart. If this is evidence of what’s in store for us from a post-Twilight Stewart, which will also include an upcoming project with acclaimed French filmmaker Olivier Assayas, then her future is looking pretty bright. 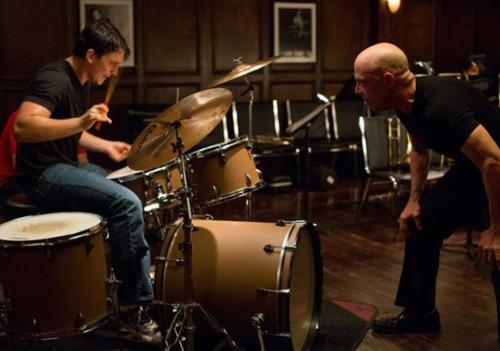 Matt Patches, Vanity Fair
Teller is absolutely ferocious in his attack on the drums, on music, on passion. Same goes for Simmons, who (believe it or not) already had fest-goers crying Oscar for his perverse, craggily, in-your-face performance.
Emma Myers, Indiewire
The collective gasps that filled the theater on opening night should stand as a testament to Chazelle's impressive ability to inject the film's musical milieu with thriller-level tension. Although the life-or-death stakes experienced by the main character may be pushed beyond the limits of reality at times, Andrew's sense of all-consuming urgency comes across on a visceral level.
Logan Hill, Rolling Stone
This isn't jazz as poetry or jazz as arcane art form: This is technical training as (literally) bloody combat.
Russ Fischer, Slashfilm
Whiplash is structured like a jazz tune, with the duel as the central melody out from which spring scenes that attempt to flesh out both characters and inform their tactics. When that melody rises above everything else, the film is unique and viciously energetic; the side notes, however, are wan, and the whole is messy and less driven than either lead character.
James Rocchi, The Playlist
Miles Teller is, at this point, the best young male actor in America -- possessed of both natural charisma and impeccable technique, his guy-next-door looks masking a singular intensity.
Erik Davis, Movies.com
It's up, it's down. It's hard, it's soft. It's unpredictable. Whiplash delivers an energy you're lucky to feel once or twice on the big screen each year, and while there are parts that can be tightened and snipped and massaged (particularly a chunk in the middle that deals with alleged abuse on the part of the teacher), the entirety of this film is like a shot of heck yeah.
Joshua Rothkopf, Time Out
Yet even though our hero's knuckles bleed and his snare gets spattered, you think: That's some truly glorious noise he's making. The discipline and beauty of bebop has never been better served by a film.
David Fear, Esquire
Even when Whiplash overplays its hand near the end, it still manages to keep the beat. It's the ultimate jazzbo revenge story, one that loses its cool and leaves you bruised.
Peter Debruge, Variety
Whiplash has a built-in advantage in that it's set in the world of jazz competitions, where Fletcher likes to keep the tempo set as high as 300 beats per minute. That energy comes through in Teller's hyper-physical performance -- yet another radical departure for an actor who's been out-transforming nearly everyone in his generation.