How Lorde Broke All the Rules: Inside Rolling Stone's New Issue 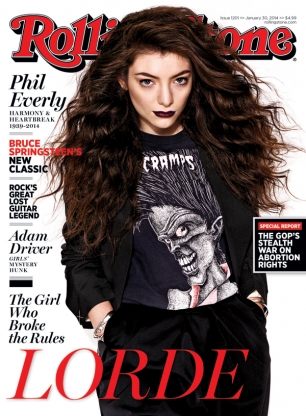 Lorde is 17, lives with her parents and loves Sylvia Plath. She also has a worldwide smash with "Royals," four Grammy nominations and acclaim for her smart, unique debut album, Pure Heroine. How'd she become the unlikeliest superstar in pop? Contributing editor Rob Tannenbaum travels to Ella Yelich-O'Connor's New Zealand home to answer that question in our new issue (on stands Friday).
"I get paralyzingly nervous a lot of times, so I tried bravado," Lorde explains, quoting Kanye West's "Dark Fantasy" ("Me found bravery in my bravado"). "The way I dress and carry myself, a lot of people find it intimidating. I think my whole career can be boiled down to the one word I always say in meetings: strength."
RS explores Lorde's childhood (when she ignored an adult trying to influence her artwork at the ripe age of two), tracks the crooked path "Royals" took to Number One and examines how Yelich-O'Connor has become an icon for teen girls of all stripes.

"Everyone talks about Ella as the anti-Miley because she dresses like a witch and she doesn't twerk," explains Tavi Gevinson, the editor of Rookie, the definitive website for self-aware teen girls. "But it's more nuanced than that. She sings about partying, she curses like a sailor and her songs aren't completely asexual. She reflects an intelligence in girls our age, and normalizes it."
Tannenbaum tags along as Ella texts with Taylor Swift, jokingly messes with one of many fans asking for photos on the street (and then apologizes — twice), opens up about the racially-charged controversy that erupted when a photo of her embracing her boyfriend on the beach hit the blogs and chats about how she's taken control of her career and spun seemingly unpopular decisions into genius.
source
Tags: magazine covers and articles, music / musician (pop)
Subscribe
Previous
← Ctrl ← Alt
Next
Ctrl → Alt →
Previous
← Ctrl ← Alt
Next
Ctrl → Alt →