Mirai Nagasu, Ashley Wagner and the Myth of the Golden Girl 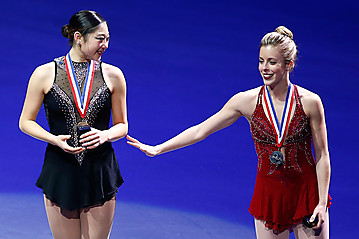 Over the next 25 days, as the drumbeats for the Sochi 2014 Winter Olympics grow louder and nearer, we’ll all be sucked into a polar vortex of hype, hoo-hah and hullabaloo, and all of it will essentially say the same damn thing: The Olympics are the pinnacle of meritocracy, where the best and the brightest test themselves against history and one another, measured only by what happens on the field, in the arena, at the bout or meet or tourney.

Some of us will find this fanfare more bitter than usual.

I’m talking about fans of Mirai Nagasu, the 20-year-old figure skater whose Olympic hopes were dashed this week when U.S. Figure Skating made the shocking decision to ignore her bronze medal in the U.S. National Championships — the event that traditionally determines the candidates selected as Olympians — and instead pick 22-year-old Ashley Wagner, who placed a distant fourth after falling twice in her routines, for the team that would represent America in Sochi.

It’s worth underscoring how significant this snub was: USFS has never in history ignored the results of the Nationals in picking its Olympic athletes when injury was not a factor.

In fact, the federation has disregarded the National Championship results only four times — choosing Todd Eldredge in 1992 despite a back injury that prevented him from competing in the U.S. trials, Nancy Kerrigan in 1994 (bumping second place finisher Michelle Kwan) after the bizarre knee attack engineered by her rival Tonya Harding’s ex-husband, pairs skaters Jenni Meno and Todd Sand in 1998 after Meno’s aching ankle forced her to withdraw from the Nationals, and then Kwan in 2006, when chronic injuries led her to miss the entire season (though she would ultimately withdraw from Olympic competition due to continued aches and pains).

But both Nagasu and Wagner skated sans bumps or bruises this past weekend. The only handicaps either faced were psychic. Nagasu’s surprisingly mature and polished performance marked a stunning turnaround after a year in which she’d achieved uneven results and acknowledged feeling “adrift,” parting with her longtime coach and training in desultory fashion across different sites in California, Japan, and Scottsdale, Arizona.

Wagner’s slapstick tumbles, meanwhile, were expressions of the nervous panic she confessed before she began an overall performance that she herself called one of the worst she’d ever given in competition, an “embarrassment” that led her to apologize to her fans and to her watching family.

So why was Wagner ultimately chosen over Nagasu? The skating federation pointed to Nagasu’s spotty record over the past 12 months, and to Wagner’s higher overall standing in global rankings. But given the dramatic and unprecedented nature of USFS’s decision, it’s hard not to see other reasons for the slight — conscious or unconscious.

Wagner’s flowing blond hair, bellflower-blue eyes and sculpted features mark her as a sporting archetype: She’s the embodiment of the “golden girl” the media has extolled when they’ve waxed poetic about idealized ice queens of the past, from Norway’s Sonja Henie to East Germany’s Katarina Witt, a marketer’s dream who’s already signed up tent-pole sponsors like Nike, Pandora Jewelry and CoverGirl, which assessed her Teutonic beauty as being worthy of serving as one of their global “faces.”

Nagasu, meanwhile, though actually one inch taller than Wagner, looks young for her two decades; her round face and wide smile have led commentators to grace her with epithets like “adorable” and “cute.”

No one wants to drag the specter of race, jingoism and xenophobia into the arena of sport, but let’s face it, in any country versus country competition, it’s there anyway. (USA! USA!)

It was there when MSNBC, breaking the results of the 1998 women’s figure skating finals, announced in headline Chyron font “AMERICAN BEATS KWAN.” The American was gold medalist Tara Lipinski. Kwan, of course, was her U.S. Figure Skating teammate, Michelle Kwan, who Nagasu as named as a role model and inspiration.

It was certainly there when Newsweek, six years earlier, had mused on Kristi Yamaguchi having the gall to take home Olympic figure skating gold at “precisely that moment when so many Americans are blaming the Japanese, rounding on them, making devils of them … and not pausing to check birth certificates.” (America has gotten much better at demanding birth certificates since then, of course.) The capper of Newsweek’s lengthy feature: “What’s a good ole boy to do if there’s not only a Toyota in the driveway and a Sony in the bedroom and a Mitsubishi in the family room — but on the screen there, as the band plays the “Star-Spangled Banner,” is the All-American girl of 1992, and her name is Yamaguchi?”

Pundits are largely more discreet these days. No one will state outright that Nagasu may have had her dream punctured because Wagner better conforms to USFS’s central casting fantasy, and the millions in corporate support that might follow it.

And even if they did, none will point out the obvious: That with Wagner, silver winner Polina Edmunds and gold medalist Gracie Gold (talk about central casting fantasies!), the U.S.A. will be taking to the ice with a porcelain-skinned, blond-tressed triple-threat, any of whom will unleash a geyser of sponsorship money if she manages to earn a chunk of Sochi metal for the motherland. That’s been left for Nagasu’s fans, who briefly pushed the Twitter hashtag #MiraiEarnedIt into prominence on the microblog, hoping to generate empathy for her plight.

But if Wagner’s “all-American” looks played any role in her selection — and of course, we’ll probably never really know — the real irony is this: blue-eyed, blonde Wagner was born in Heidelberg, Germany. Nagasu, meanwhile, was born in Montebello, Calif.

imo, Queen Yuna and Mao already got the gold and silver medals covered so all this drama is pretty much a race to third, but considering none of these girls had ever medaled at Worlds, it looks pretty grim either way for team USA