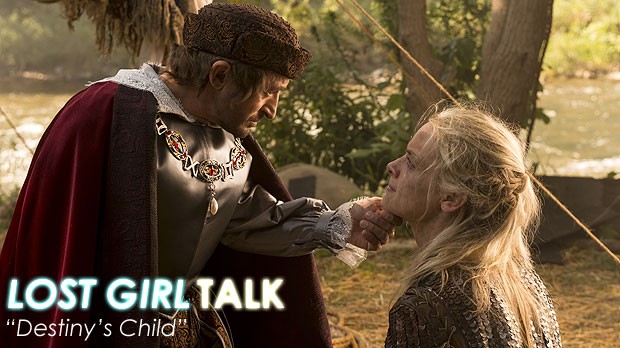 It's raining Rainer reactions and Trick trickery in this week's post-mortem session with the Emilys.

Hope you’ve got your Rain(er) coats on, Lost Girl fans. Because this week’s Lost Girl Talk is pouring with Rainer reveal deets (non-spoilery, of course) and a whole box of other future-telling goodies that we promise won’t send a dagger, or any other hellish item, at your head.

But we’re getting ahead of ourselves. Let’s talk “Destiny’s Child” and let’s talk it now! 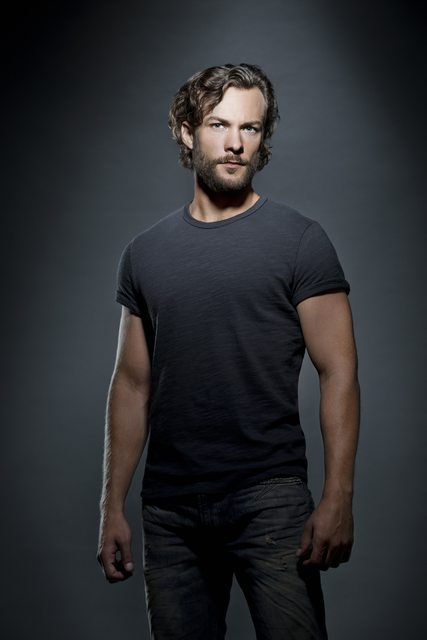 (OP:  Yes, Kyle Schmid now has an official cast photo for this season, take that as you will. Only one pic, so far.)
TV Guide Canada: We finally met Rainer this episode! Why did you choose Kyle Schmid (Copper, Blood Ties) to play this hugely anticipated character?
Emily Andras: We were like, ‘We want someone really hideous, first all.’ And we just settled on Kyle. 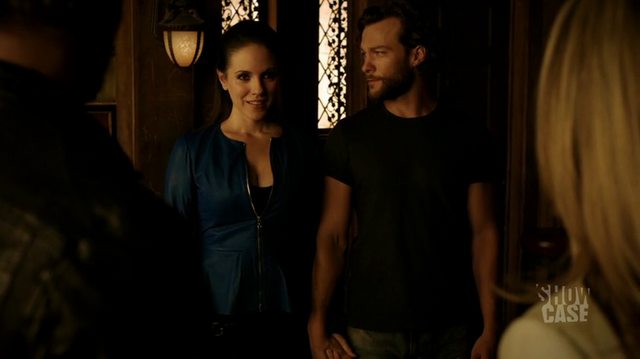 No, we really wanted someone with charm. We wanted someone who was unexpected. We wanted to be with Bo and he takes off his welding mask and he’s kind of a pin-up model. Like, he’s not her father (OP:  Flames. on. the. side. of. my. face), he’s young, he’s sort of gorgeous, and Bo likes attractive people …

But we knew Kyle from his roles on Copper and Blood Ties, and we were quite excited when we heard he might be available. And he just did an amazing audition. (OP: Everyone must have to audition for this show, which I guess is not a bad thing, but is sort of surprising.) And needless to say, he’s going to bring an interesting new energy to the cast. It should be interesting to bring another strong male into ensemble … if he can survive long enough to get past Dyson, Lauren and Trick. [Laughs.] 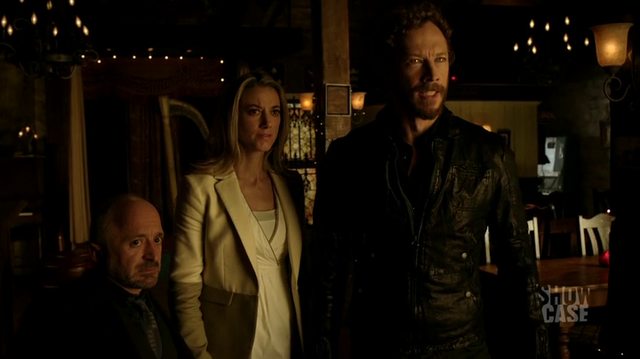 The truth is, he was already a part of the group. Our cast is notoriously family-based — they’re such lovely people all of them. And this being Canada, I have no doubt Kyle has made out with everyone in the cast already on previous projects. [Laughs.]

But he is really jovial guy, so he fit in really well. He and Anna really connected because they had to — we did some work ahead of time to make sure that they had chemistry. And I do know that they’ve all gone off to do some movie in Malta. I think Kyle, Emmanuelle and Kris are in the movie? (OP: The movie is Saul: The Journey to Damascus, which, well, I guess I'm just glad they are getting work. XD)

TVG: So, did you say that Rainer definitely is not Bo’s father? Or is that something that’s still in contention?
EA: Well, Bo certainly seems convinced he’s not her father. (OP:  Flames x2) She certainly knows what’s going on, or seems to know what’s going on. So, I think we can anticipate getting some more answers from Bo’s perspective going forward. She seems to have more information than we had time to give, and I think people are going to be pretty keen to get that. 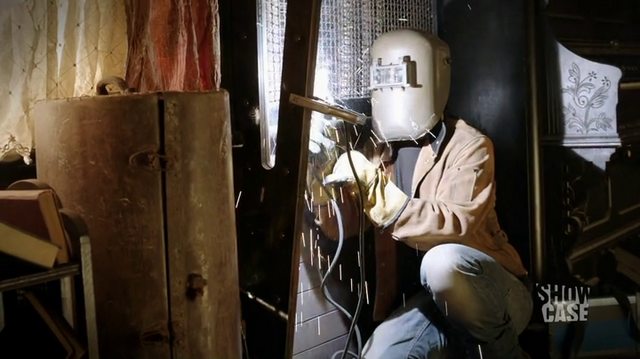 TVG: You also mentioned the welder aspect of Rainer. Is that the lead-in to the next big dance scene, perhaps with a bucket of water and a spotlight?
EA: Ooh, I like it! Like Footloose style? When Kevin Bacon’s learning how to dance in the warehouse? So you’re asking if the next episode is Stomp?

But the deal with the welding is that he’s trying to keep the train together because it’s obviously been falling apart. Plus, welding is sexy! We tried to talk Kyle into an off-the-shoulder sweatshirt and he was like, ‘No, I’m not doing that.’ But he could pull it off!

TVG: If he does make it to Season 5, you have to do it.
EA: We’ll see! I’m up for anything and open to suggestions. 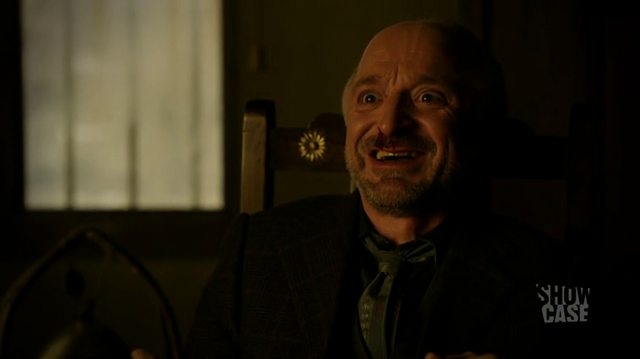 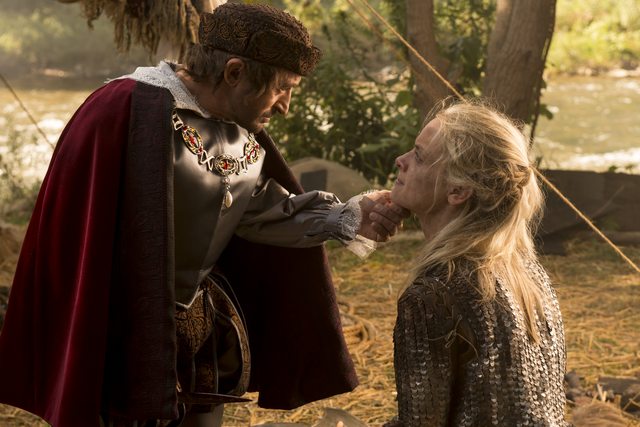 TVG: The way we left things, Rainer’s almost looking like the good guy and Trick is, for lack of a better word, seeming to be tricky. Can we take anyone at face value at this point?
EA: Rachel’s a natural blonde. That’s all we know for sure!   (OP:  That is a dirty lie, Andras, I have seen pictures of Rachel with her brother.  I think the most you can say is she is a natural dirty blonde.)

No, I think things are really up in the air as for perspective. That’s sort of the trick about history — the villains of history don’t think they’re the villains, and the victors write history. One man’s rebel is another man’s terrorist, right?

Trick was this all-powerful king, but was he also a dictator? Yes. And I think it’s going to be interesting to flip those roles. That’s very Lost Girl to me. I like those shades of grey — light and dark, good and evil — and what those things mean to people and to our gang. So, all we can take at face value is that, yes, Dyson will wear another vest. At some point. Maybe.

TVG: You’ve managed to keep the identity of Rainer under wraps for so long. Are you worried about the secret getting out, considering that this episode airs here as the season is just starting in the U.S.?
EA: That’s always a concern in the age of the Internet. And the truth is, spoilers abound. But I think we’ve done our best this year and we’ve done pretty well at keeping some huge twists under wraps, one of which was, of course, Kyle as Rainer. And you can’t sweat the details too much. I feel like the true fans who are going to look that closely at spoilers are also some of our biggest supporters anyway. I think they’ll still watch it.

In a perfect world, I wish it was all simulcast. But I’m hoping that the American fans are just delighted and excited and avoid spoilers to the best of their ability. And there’s more surprises to come! (OP:  Trololol at avoiding the spoilers part) 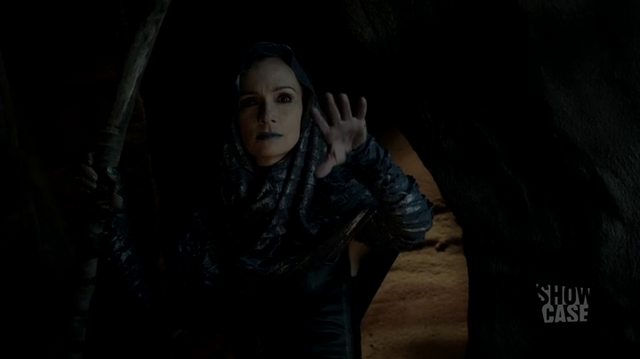 TVG: I also want to know where you pulled inspiration from in creating the Leviathan, or as Bo called her the “Levi,” of Lost Girl. Because she was so sassy, from her outfit to her puzzling nature.
EA: Sometimes it’s good to remind the audience of how smart Bo is. So I just liked that this was a villain that Bo couldn’t physically fight. And I just thought it was really meta for Bo to sort of win the game by referencing that maybe she has some trouble making decisions.

Obviously, we were inspired by the famous game of riddles between Gollum and Bilbo in The Lord of the Rings. We thought that would be kind of funny if we did it with women. (OP:  Women are not allowed to be riddlers?) And the Leviathan is a famous type of character. But as always on Lost Girl, we really like to be like, ‘It’s not this scary monster, but this beautiful, ancient woman.’

We just really wanted a mythical figure associated with the underground. The Leviathan is traditionally associated with a big body of water, so I like that we put her in an almost desert. Maybe things have dried up? And what does that actually mean? And what about the fact that she said that someone is going to die? That’s pretty terrifying. Possibly. (OP:  The person to die...Rainer, since the Leviathan was looking for him and Tamsin was denied taking him to Valhalla?  Dyson has already almost died once.  Offing him again would be repetitive.  So, Lauren, Kenzi, or Trick, if not Rainer? Tamsin is also a distinct possibility - sorry y'all, but since she was reborn last season, it kinda feels like a situation similar to Dyson's, even though it sounds like Trick did some life re-writing and life extension on her behalf for not taking Rainer. Other than Rainer, I don't expect anyone to stay dead, though.)

(x)
TVG: Was the hell box Kenzi and Tamsin were playing with drawn from Japanese legend?
EA: Yes, it was. If you look into it, it’s really interesting and they really did exist. They were laced with poison and stuff like that.

We had a lot of extra moments with that box that didn’t make the edit. We had Kenzi open one flap and she kind of turned into an old woman. Tamsin was just staring at her and Kenzi was like, ‘What? Do I have something on my face?’ and Tamsin was like, ‘You’re cool, you’re cool!’ (OP: WHAT?!? They filmed that and cut it?  Sometimes I seriously side-eye the judgment of the people behind the scenes, to be honest.  Of course, if it was a matter of CGI and cost, I'll let them slide on old woman Kenzi.  But it seems like you could just do that with makeup....  ARGH!) 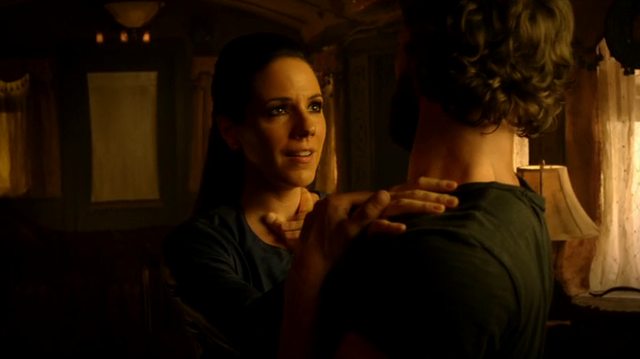 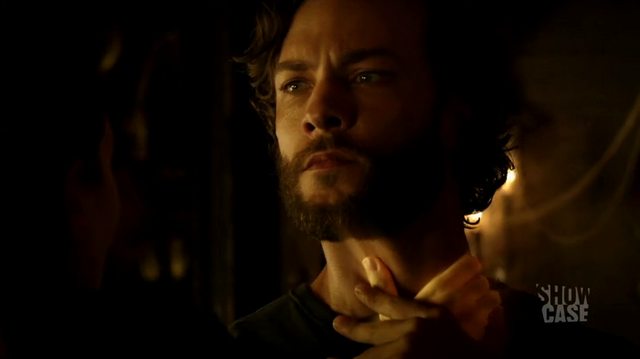 TVG: Last question: what sort of nibblet can you offer up about next week’s episode?
EA: Next week’s episode is actually really fun! The case is really fun and it’s something I’ve been wanting to do for a long time, which Lost Girl fans will decipher. But we also have to find out what went on with Bo and The Wanderer.

We’re going to see some flashbacks to the train and maybe an explanation of their relationship and what actually happened with them. But in the meantime, is Bo under a spell? And where do we go from here knowing that this is Trick’s enemy?

Thoughts? Questions about “Destiny’s Child’? Leave ‘em below! And be sure to check back next week for our post-mortem on “Waves.”

If you've been following these recent Lost Girl posts and the comments, you are possibly [Spoiler (click to open)]not surprised that I have a bit of an issue with this episode, haha.  I got a bit carried away with OP comments on this, which I normally don't include a lot.  I am somewhat mollified by a welding Kyle Schmid with a beard, but this father thing has been going on since S1.  How long can you drag this out, show?  I'm seriously thinking that we are going to find out who Liz's father definitively is on The Blacklist (which is still in its first season and the father thing is a HUGE plot point) before they are going to do so on Lost Girl.  Maybe Aife had an immaculate conception.  Or succubi in this universe can asexually reproduce.  ;-P

Also, Lost Girl S4 started last night (Mondays 8pm/7pm Central) on SyFy in the US (watch it legally streaming, at least, if you can), and will begin airing this Thursday, January 16th, at 10pm on SyFy in the UK, for all of you UK peeps that have been saying over and over in the comments that you wanted to catch up (*cough*