Taylor Kinney on Dating Lady Gaga: "For Whatever Reason, It Works" 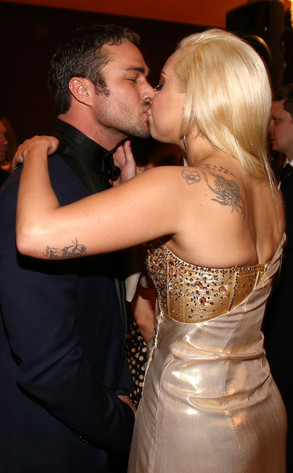 For Taylor Kinney, his relationship with Lady Gaga is anything but a bad romance.
In fact, despite differences in their personalities, the Chicago Fire star seems to suggest it was simply meant to be.
"I'm reserved. She's not. For whatever reason, it works," the 32-year-old actor told E! News' Jason Kennedy at NBCUniversal's Golden Globes afterparty in Beverly Hills on Sunday, Jan. 12.
He added, "It works and that's that."

Kinney and Gaga certainly proved just that at the shindig, where they had no problem packing on the PDA. The two shared a passionate kiss as they entered the A-list event held at the Beverly Hilton Hotel.
And while Mother Monster's handsome beau might say he's a bit reserved, his girlfriend did tell Ellen DeGeneres last November that her man is a "hidden weirdo."
She playfully revealed, "He is extremely strange, actually, and we complement each other's weirdness."
Obviously.
source
Tags: actor / actress, lady gaga
Subscribe