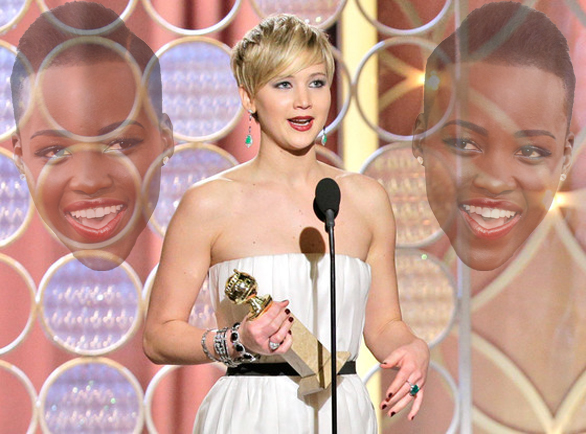 Even if you didn't watch the Golden Globes, you might have caught the highlights and low points from Twitter's armchair critics. Amid the chatter about dresses, 'dos and the long path to the stage, some viewers used Twitter to call out examples of sexism and the lack of diversity surrounding the awards.

While there was much love for hosts Tina Fey and Amy Poehler, discussion of gender inequality and racial disparities among nominees and winners coursed throughout the Twitterverse. Some of the conversation was stoked by the Representation Project, a nonprofit that challenges gender stereotypes in the media. The group urged viewers to use the hashtag #NotBuyingIt to cite examples of racism and sexism during the show and in commercials.

Here's a sampling of those comments:

A nom at the #GoldenGlobes increases the chances that similar movies/filmmakers will get funded. So lack of diversity matters. #NotBuyingIt

Angela Bassett is the only black woman to ever win Best Actress in a Comedy/Musical (film). That was 20 yrs ago. #NotBuyingIt #GoldenGlobes

Diane Keaton looked fabulous on stage, followed by a Loreal ad that removed every line from her face. #NotBuyingIt #GoldenGIobes

I'm going to rename the #GoldenGlobes as "the Unbearable Whiteness of Being."

And just when it seemed like "12 Years a Slave" had been shut out, the best drama winner was announced:

Golden Globes saves itself from justified Twitter wrath at literally the last second.

All the critics writing 12 Years a Slave shutout stories are now frantically rewriting their lead paragraphs! You're welcome America!