One Direction fans freak as Liam Payne takes his life in his hands! 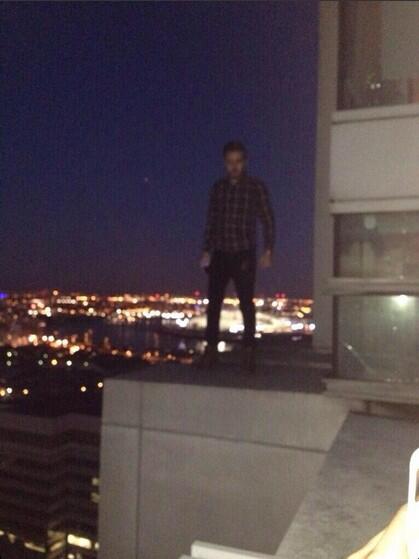 Liam Payne has caused a bit of a furore online tonight, after a puncture emerged of him behaving rather dangerously.

The One Direction star was reportedly rather drunk last night and he partied for hours, starting off at Zayn Malik’s birthday bash in London.

Liam’s pals revealed that they crashed Zayn’s party, before heading back to Payne’s pad for some video games. They later hit the clubs for a night of drinking and dancing.

We reported earlier this morning that some onlookers claimed the 1D hunk was so drunk he ignored his girlfriend as they left Zayn’s house and apparently when he got home the Little Things hitmaker was still rather inebriated.

A friend of the X Factor singer has uploaded pictures of the star which seem to show him walking on the outside of the balcony of his London apartment.

Since the shots have been shared Directioners all over the world have been reacting and it’s fair to say that many are terrified by the photos.

One posted: “LIAM BE CAREFUL UR NOT REALLY BATMAN OK ”

Another tweeted:“Liam be careful I don’t wanna see “liam payne member of one direction falls off roof top”"

A third wrote:“MY HANDS ARE SO SWEATY FROM THIS LIAM BE CAREFUL PLEASE”

In the end it all worked out well and Liam survived the dangerous stroll and later joined his pals in Funky Buddha nightclub for some merriment.He tweeted last night as he headed out saying:

“Rap battles in the car so funny aha”

This morning he added:

“Had some strange dreams yesterday wonder what they all mean”