MTV News asked music experts and artists like Kate Nash and Screaming Females to weigh in. 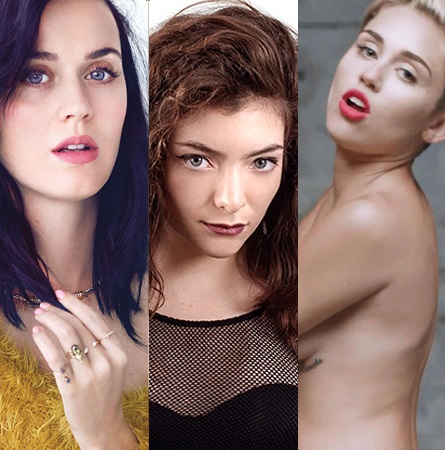 Back in 2013, the "f" word seemed to be on everyone's lips. And when we say "f" word, we don't mean the term that gets bleeped out on TV — we mean "feminism." Yup, people sure seemed to dig that word last year as it related to music, but the question that never seemed to really get resolved was: What was feminism's deal in 2013?
Perhaps it all started when Katy Perry took the stage at the end of 2012 at the Billboard Women in Music event and stated: "I am not a feminist." Or perhaps it was the not-so-positive reactions to Robin Thicke's racy "Blurred Lines" song and video — and his subsequent turn onstage at the VMAs with a twerking Miley Cyrus — that stirred the pot to a boiling pot.
But those weren't the only murmurings of the word: Kathleen Hanna and Grimes praised Beyoncé for her inherent feminism during the VMA pre-show, months before Bey brought in feminist author Chimamanda Ngozi Adichie to speak on her self-titled record. And then there was Selena Gomez stating, "That's not feminism," when Lorde expressed concern with the themes of "Come & Get It."
That's not to mention, of course, the thousands of think pieces on the above events, as well as open letters from the likes of Grimes, Kitty Pryde and Chvrches' Lauren Mayberry about the role of women in the music industry.
The dictionary definition of feminism is pretty clear — "the belief that men and women should have equal rights and opportunities" — but when the idea is actually applied to real life and, in particular, the arts, it seems the execution gets a bit muddled.
Amid all this talk of whether Miley's assertion that she's "one of the biggest feminists in the world" is false or true — and what the success of Bey's sneak attack album will have on women in music and music in general — MTV News hit up a cadre of experts to answer one question: "In 2013, did feminism take steps forward — or back?"
Feminism In Pop Music... Got "People Riled Up"
Jennifer Armstrong, author of "Sexy Feminism: A Girl's Guide to Love, Success, and Style"
"This [was] a big year, for some reason, for asking female pop stars whether they were feminist. It seems like it really gets people riled up both ways.... In my opinion, it has been a good year for feminism. I think that any time we're talking about it, that's a good thing."
Feminism In Pop Music... "Feels Like Freedom"
Therese Workman, Oh My Goodness
"To me, Miley Cyrus with her poompoom out, Sinead with her open letter (get that publicity, love), American Apparel making barfy vagina shirts, Rashida Jones calling it all out on Twitter — all of this boiling up and over is exactly what I understand the feminist movement to be. The nature of agitation is to effect change.... So, maybe I'm naive, but sort of think that all of this is pushing the movement forward. And I feel very fortunate to be forging my own path during this era in pop music. Because it doesn't feel like work — it feels like freedom."

Feminism In Pop Music... "Gained More Visibility"
Sadie Dupuis, Speedy Ortiz
"I think it certainly gained more visibility in music this year. I think last year was the year that Katy Perry said she doesn't consider herself to be a feminist. And this year we have Miley Cyrus claiming after the VMAs that she is perhaps the world's biggest feminist. So in that sense I think that people in music and fans of music have become more aware of the role that feminism plays for female artists.... I just think it's cool that we have so many people claiming it for themselves and using it to mean whatever helps them feel more human and feel like they're able to justify their actions as a human rather than as a woman."
Feminism In Pop Music... Bred "Amazing Female Bands"
Kate Nash
"There have been a lot of amazing female bands [coming up]. I've been on tour with a lot of girl bands — a lot have started. People like the Tuts, people like Potty Mouth, La Serra, The Aquadolls. There's been some really amazing girl bands. The success of HAIM, they've done amazingly well. The break-through of Lorde. Every year you can't really say things have moved forward or backward, everyone has different ideas on sexual politics. I think the most important thing is to focus on the positive really. From my personal experience, I think we've moved forward, because I've had so much amazing young women — girls crowdsurfing every night. Being liberated."
Feminism In Pop Music... Could Come Closer To Reality
Marissa Paternoster, Screaming Females
"We came up out of [a small punk] scene and we were lucky enough to start playing with a lot of other female-fronted bands — and if they weren't female-fronted, more often than not any given band that we played with had at least one woman. I'm kind of spoiled in that way.... Here's hoping that my reality kind of morphs into a norm for everyone."

Feminism In Pop Music... Was 'Rough'
Sesali Bowen, Writer for Feministing
"This year has been rough for feminism. Primarily because it has become painfully obvious that so many people don't — and aren't willing to put the required work in to — fully grasp exactly what feminism is or its many intersections and layers. Miley Cyrus is called a feminism icon because she took her clothes off and shook her ass. But at the beginning of the year, Beyoncé was denied the title for doing the same thing. Not many people took the time to understand how those two popular opinions were related, which represents the real work of feminism. This year I saw feminism in pop culture become a kind of groupthink that neglected and rejected the critical thinking that is necessary to develop a feminist framework."
Feminism In Pop Music... Was About "Ownership Over Your Own Sexuality"
Elizabeth Plank, Executive social editor at PolicyMic
"Beyoncé's groundbreaking visual album couldn't have come at a better time for us to think about what feminism really means for the modern-day woman. Empowerment doesn't come from the appropriation of other women's bodies, it comes from the ownership over your own sexuality. Beyoncé singing an ode to the cunnilingus did that."
Feminism In Pop Music... Went "Forward" — "Culture As A Whole" Went Backward
Shilpa Ray, Shilpa Ray & Her Happy Hookers
"Forwards for Feminism. Backwards for culture as a whole. I actually worry more about men and their virgin/whore complexes than I do about women. Women have been working fringe networks for survival throughout history. Strippers, prostitutes, models, actresses, pop stars — psshh! How hypocritical for any of us to judge a woman for taking her clothes and getting paid for it? It fast, it's easy and worthy of the capitalist society we live in. The reason why men have so many gripes about naked women is because they're jealous. A naked man will never make as much money as a naked woman. Men can't stand that so they cheapen it, turn it into trash, try to market it, own it, possess it, become pimps to control the woman's income — Screw that! A woman should capable of selling her own product."