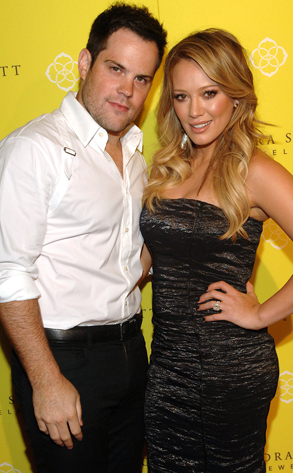 The 26-year-old singer and actress and 33-year-old former NHL hockey player have broken up after three years of marriage, Duff's rep confirms to E! News.

"Hilary Duff and husband Mike Comrie have mutually decided to an amicable separation," Duff's rep says in a statement. "They remain best friends and will continue to be in each other's lives. They are dedicated to loving and parenting their amazing son, and ask for privacy at this time."

The former couple, who married on Aug. 14, 2010 in a Santa Barbara, Calif. ceremony surrounded by 100 guests, have one son, Luca Cruz Comrie, who turns two in March.
Duff and Comrie welcomed their first child on Mar. 20, 2012. "We are overjoyed," the new mom tweeted at the time. "He is surrounded by so much love!! Mom and baby are both doing extremely well."

In June 2012, just three months after giving birth, Duff opened up to E! News about being a mom, gushing, "There's really no words to describe it. It's the most incredible thing every day. It softens you so much. I feel like a big mushy ball." She added of Comrie as a first-time father, "He's really incredible. He's so hands-on, so thoughtful, so loving. He's really a natural, it's incredible. I got really lucky."

At the time, Duff also talked about keeping the spark alive in the marriage with a newborn at home. "We go out like once a week together and try and do something fun," she said. "We either go to dinner...we're going to go bowling next week. It's weird scheduling so much because we used to do things on a whim and no we have to schedule. But it's good. It's really important for your relationship."

The blond beauty and her man didn't show any signs of bad blood prior to the split announcement. In addition to recently being spotted all smiles during a stroll in the park, the former lovebirds took little Luca to Disneyland for his first time in December. Duff shared an adorable pic of her happy family at the magical theme park, writing, "We braved Disneyland yesterday! Luca's 1st time."

Back in November 2013, Duff opened up about the possibility of having another kid with Comrie. "If I had another boy, I would be happy, but I would like to try for a girl and I'm not sure that I want to have three kids," she said.

She also called her bond with Luca "incredible," adding, "The mom and boy relationship is really, really sweet and I'm so obsessed with him."

Mike and I are sitting here,we are so appreciative for all of your kindness& well wishes. Not an easy day but we're getting thru it together