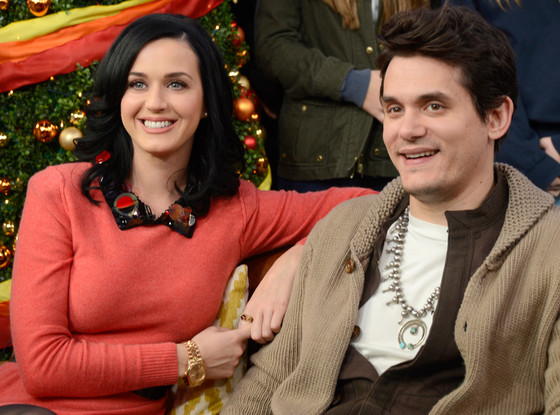 While many were initially skeptical of John Mayer and Katy Perry's romance, it seems that these two lovebirds just may indeed go the distance.

E! News has learned that couple recently vacationed together in Hawaii, where they stayed a private house on the island of Kauai, enjoying a romantic vacation together for over a week.
"They seemed really happy and in love," a source exclusively tells E! News of the duo, who recently debuted the music video for their hit duet "Who You Love."
The lovebirds also recently exchanged extravagant Christmas gifts perfect for the wealthy musicians, another source exclusively reveals, with Katy gifting John a Samurai sword while the "Gravity" crooner gave his ladylove a pair of diamond angel wings (too cute!).
The pair, who has been dating on and off for the past year, has found themselves at the center of engagement rumors for some time, most recently after the "Fireworks" beauty rocked a diamond ring on that finger while appearing at the MTV Europe Music Awards in November.
But while the twosome has yet to comment on the engagement speculation, those close to the couple believe the pair is perfect for each other and wouldn't be surprised if the duo decides to take the plunge.
"Everyone wants them to get engaged," a source exclusively revealed to E! News in November. "They are so perfect together." The insider added that a proposal is "inevitable," though not necessarily in the immediate future.
Mayer was most recently seen at LAX airport, where he was grilled over the rampant engagements rumors, but chose to ignore the pesky paps.

Perry, meanwhile, has been keeping busy with work in addition to enjoying a little R&R with her man, performing at a private party for Dr. Phil's wife, Robin, in honor of her 60th birthday on Dec. 29.
According to InTouch, Katy "rocked it—she looked amazing in a silver dress that showed off her body," and "everyone had a great time."
Katy and John also celebrated New Year's Eve in Las Vegas, where the lovebirds presumably marked the new year with a midnight kiss.
Dare we say 2014 will bring an engagement for these two?!
I added in the Hawaii pics  :) Nevrmind, they were old, lol mess :p
source
Tags: john mayer, katy perry
Subscribe
Previous
← Ctrl ← Alt
Next
Ctrl → Alt →
Previous
← Ctrl ← Alt
Next
Ctrl → Alt →