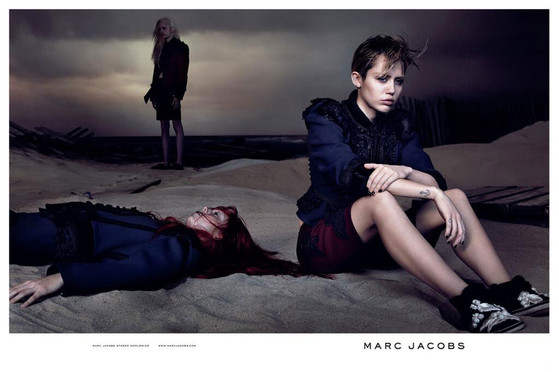 Marc Jacobs loves Miley Cyrus so much, he hired her to star in his Marc Jacobs spring/summer 2014 collection campaign.
But not everyone on the designer's team wanted to work with the 21-year-old "Wrecking Ball" singer.
Juergen Teller, the in-house photographer that typically shoots Jacobs' campaigns, refused to work with Cyrus and didn't shoot the new 2014 ads. "I have worked with Juergen for years and love him as an artist," Jacobs tells Women's Wear Daily. "He just didn't want to shoot her."

The new campaign was instead shot by David Sims on a beach set styled by Stefan Beckman.
The ads feature Cyrus along with two other female models on the sandy shore. "We wanted this beach with the girls kind of sulky and broody, and we thought it would be cool if it was Miley with what could be two friends, feeling distant and quite dark," Jacobs says.
Jacobs gushed of Cyrus, "We all just love her and her entire being, her talent, her intelligence, everything. There's nothing I don't like about her. She is just genuine and very natural."
Tell that to Teller!
It's no secret that Miley is also a big fan of the fashion designer. She wore his sheer mesh gown at the 2013 Met Gala in New York. She also posed naked for Jacobs' "Protect the Skin You're In" T-shirt line.
source
Tags: fashion, miley cyrus, photo shoot
Subscribe
Previous
← Ctrl ← Alt
Next
Ctrl → Alt →
Previous
← Ctrl ← Alt
Next
Ctrl → Alt →