What I find is pleasing and I'm feeling fine (

UPTON’S PEEP SHOW: In its upcoming spring preview issue, V Magazine is playing up the va-va-voom of its latest cover girl, Kate Upton. The fashion magazine has created a peel-back acetate cover of Upton, who is clad in a Nicola Formichetti denim bodysuit for Diesel. Next to the image is the title of the cover story: “Why Can’t Kate Upton Keep Her Clothes On?” Once peeled back, the clear cover cheekily shows Upton wearing only a bikini. 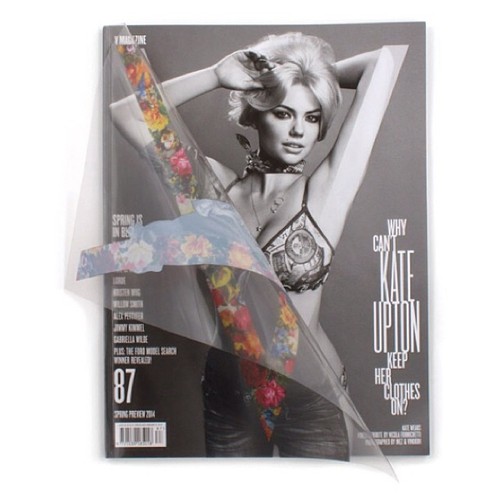 Photographed in New York at the end of September by Inez van Lamsweerde and Vinoodh Matadin, the cover was styled personally by Formichetti.

Set to hit newsstands on Jan. 16, the issue is just one of many quirky covers the fashion magazine has released over the years. For example, for Fall 2009, V featured Lady Gaga on a cover that came with a pair of removable sunglasses.

For V’s editor Stephen Gan, the cover was an easy decision, as the magazine has featured Upton four times already.

“Each time I saw her at a shoot, she had become a bigger and bigger star, and her physique, more and more notorious,” Gan said. “It has always intrigued me, as I’m sure it has to most readers, how someone gets embraced by the general public for taking their clothes off and loved by the fashion world for keeping them on.”

Gan said the choice to feature Formichetti’s collection for Diesel on Upton and elsewhere in the issue fit into the cover’s motif, as the clothing applied assembly techniques like “pop-ups and die-cuts.”

Regarding the shoot, Upton said that she tries to “make all of her covers unique, even when in a bikini.”

When asked about the cover’s title, i.e. why she “can’t keep her clothes on,” the model offered: “Because I don’t want to!”