'Doctor Who': Our hopes for Peter Capaldi's era (I know, I know, another Doctor Who Post) 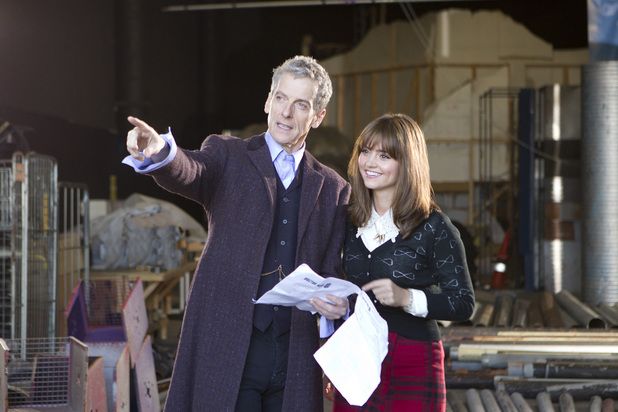 Steven Moffat said recently: "If Russell [T Davies] had stayed on, [Doctor Who] would still have changed. I remember when we had our handover chat, he was saying ‘so what are you going to do, are you going to change that?’ and I said ‘well, what would you change?’ and we both agreed ‘it’s time to kick a lot of stuff out’. And actually, it is time again to do that... So now we’ve got to actually get a bit raw at it and do it in a different direction."

What are the things that Moffat and co have got a bit too good at? What do we now expect from a Doctor Who story? What is it time to lose?

So, here’s a look at what has become a bit too expected over the last couple of years - and what might get junked as Peter Capaldi takes the TARDIS helm...

It was a great line from a suddenly beaming Doctor in ‘The Doctor Dances’ (written by Moffat himself, you’ll recall). In the midst of one of the show’s most creepy stories ever, one of the cardinal rules of Doctor Who mythology was rewritten: by the story’s end, everyone had survived. Or if they’d died, they hadn’t died really.

Then came along ‘Silence In The Library’ (Moffat again), in which, again, people didn’t die exactly, they were literally ‘saved’ to a memory bank. More recently, we’ve had Rory, who had his own running joke of dying repeatedly, followed by Impossible Girl Clara, whose entire plot purpose – initially, at least – was to die again and again.

This could be one thing that Steven Moffat will end: it would certainly be a shock. We need to get the Fear Factor back. Death needs to matter. It needs to have important. Hell, in the second episode of the rebooted series back in 2005, we were shedding tears over a talking tree. The only way to fear Dalek gunfire again is to know that it’s something you can’t survive. It’s enough that the central character himself can cheat death, but everyone else has to feel the fear.

Yes, great: flirty, sparky, sexy and confident female characters. Yes, arguably better than doe-eyed ‘what next, Doctor?’ type drones. And, no, we wouldn’t swap Tasha Lem for – well, pretty much anyone. But we’re not too sure if these fantasy-fulfilment characters are actually doing anyone any good, least of all the armies of little girls watching the show.

Rose was a memorable and loved companion, and she was at times petulant, grumpy, jealous, narrow-minded and selfish. Flawed. In other words: a real, relatable human. Same goes for Donna and Martha, who were perfectly not perfect. Amy, Clara, River Song – and almost every major recurring female character of the Moffat era – are all wonderful, but it might be time to kill your darlings. Perhaps literally (see above). Even Sarah Jane Smith was terrified, overwhelmed and unsure – but it didn’t stop her being brave, resourceful, and the very first companion that The Doctor named ‘my best friend’.

Yes, it’s true that Moffat has exploited that previously least-used element of a show that’s all about time travel (clue: it’s the time travel bit), but he runs the risk of writing himself into so many corners, he’s actually created a Spirograph.

Particularly when the big reveals are actually quite small: mysteries that are spun out over four years, only to be solved with an answer that isn’t nearly as clever-clever as you were promised. Now we’re getting throwaway gags about restaurant bookings and iPlayer. Even Time Lords aren’t supposed to find hopping back and forth over the vortex quite that easy. Having said that, we’re still not sure that we’ve worked out quite how Clara and The Doctor managed to escape from his own time stream after the conclusion of ‘The Name of the Doctor’.

There’s nothing wrong with re-writing history (or future) in Doctor Who: apart from anything else, a new team can come along in five years and re-write your rewrites. But the sands are shifting a little too quickly.

We personally liked the plot of ‘The Day of the Doctor’, (the time war happened! But it didn’t! The Doctor committed double genocide! But he didn’t! Hang on, are Rassilon and The Master still fighting it out in there? Erm, shh) but there’s a risk that any sense of peril whatsoever – up to and including the destruction of the entire universe – can now be rubbed out with a reset button, which is only a few steps removed from an ‘It was all a dream’ get-out clause.

This seems effortless, and not in a good way. Saving the universe should take a bit of work. It was one of the main reasons why the McGann TV movie is derided: now it’s time for less Deus Ex Machina, more struggles for the big win.

The oldest question, hidden in plain sight: Doctor Who. Not a question, but a title. The show is about the Doctor. The grit in the oyster about Matt Smith’s wonderful tenure in the TARDIS is that he was often pushed to the background of his own stories, in the shadow of Amy, River, an exploding TARDIS, or multiple Claras.

It’s difficult to see that Capaldi’s Doctor will allow himself to be buffeted around by circumstance in the same way. Now that the Doctor is on a mission to find his lost home planet, the show has a new direction – literally. In theory, this could take another 50 years. The Doctor is bigger than any actor, any showrunner, any writer. It’s time for the universe to get big again for him to be lost in.

In the end, anything can happen. The Doctor and his blue box can go anywhere and anywhen. And that’s the beauty of the show. It is literally the only programme in existence that can – for want of a better phrase – regenerate - into something entirely different every few years, each time a change of focus is needed. No matter what disgruntled fans or questioning articles (yeah, like this one) might say is ‘true’ Doctor Who.