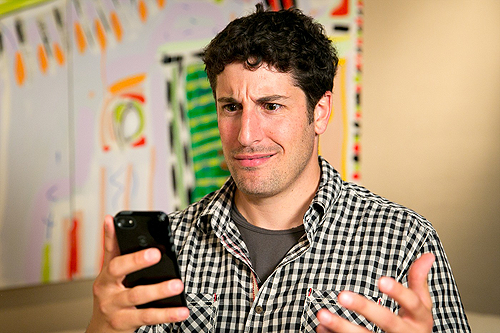 Mr. Biggs is apparently one of those people who watches and live-tweets The Bachelor, and I’ll leave you to form your own judgments on that. But apparently, during last night’s episode, he had some high-larious commentary to add:

I bet that girl who has 9 special needs family members lets them play with her big titties every now and then cuz what else right?

You can write the Ten Commandments on the front teeth of at least 8 of these chicks. #TheBachelor

Juan Pablo will hate-fuck all these chicks. They will all convince themselves that they love him. He will be single when the show is over.

First of all, let’s put aside the fact that if there was an election to appoint perpetual onscreen masturbator Jason Biggs as some kind of authority on beauty, they might wanna recount those votes. BUT I DIGRESS. Mostly, Mr. Biggs’ (presumably) humorous commentary is a bit of a shock for us Anything Else admirers, American Pie apologists, and (most recently) Orange Is the New Black fans, since the actor always seemed, at best, harmless. Come to find out, he’s sort of ugly and shallow — and he uses the word “chicks” unironically and repeatedly, a crime which should, at the very least, result in the confiscation of his smartphone.

But this, beyond breaking news and self-promotion and @emergencykittens, is Twitter’s greatest accomplishment: it removes the painstakingly constructed filter that protects terrible celebrities. The creation and presentation of a carefully cultivated public image dates back to Hollywood’s studio system, where movie stars were selected, groomed, trained, and displayed, their personal lives as attentively scripted as any of their films. Real-life romantic interests were cast for them, often from elsewhere in the studio stable; quirks, addictions, and peccadilloes were discreetly hidden. For a brief period after that system crumbled, there was a bit of an anything-goes, Wild West thing happening (hence that Ebert/Lee Marvin interview, and pieces like it; track down Ebert’s book A Kiss Is Still A Kiss and you’ll see what I mean). But then came the rise of the super-publicist, paid big bucks to keep their crazy clients on lockdown, which is why we’ve got the boring celebrity interview culture of today, where stars parse out the same five-minute answers to junket journalists over and over, which tells us all about the product they’re shilling, and nothing about who they are.

And in many ways, Twitter is part of that same beast — a promotional tool, to cultivate a persona. So who knows, maybe the people who are genuinely delightful on Twitter, like Mindy Kaling, Elizabeth Banks, Stephen Colbert, Melanie Lynskey, Anna Kendrick, and Joss Whedon are (or have their publicists) tweeting just as carefully as we are; you can’t put much stock in that. What’s certain is that it’s in few celebs’ best interest to get on Twitter and put on the persona of an asshole, and few publicists will let them do that, given the opportunity.

But when they’re out in the world with a phone burning a hole in their pocket and something stupid to say, the publicist can’t do much about it, and this is why Twitter is glorious. Without it, we might not know that Jim Carrey and Amanda Bynes are crazy, that Charlie Sheen is beyond crazy, that Ashton Kutcher is a wildly uninformed schmuck, that 50 Cent is a spoiled brat, that John Cusack is dull as toast, or that random NFL players are homophobes. OK, for at least a couple of those, we’d probably know. But it’s nice to have social media to confirm those suspicions, and to know exactly what kind of people we’re dealing with — for better or for worse.