Ay Dios Mio! 'Fifty Shades' won't be a trilogy after all? 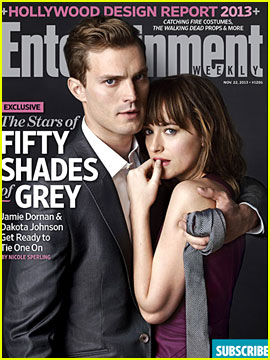 Bad news for “Fifty Shades of Grey” fans-- multiple rumored reports indicated Sunday that the E.L. James book trilogy of the same name is being condensed into one film adaptation instead of three separate feature films.
According to a report rom the Agencia EFE via the Global Post, the decision to make the popular erotica series into one movie was recently confirmed by producers of the highly-anticipated film. “James’s trilogy will be condensed into just one film, the production company said in a recent statement,” reads the report.
The news, which has come to shock to many fans of the “Fifty Shades of Grey” series, was unveiled during a report that the stars of the film, actors Jamie Dornan and Dakota Johnson, would be shooting scenes in Miami this week due to the unstable weather conditions in Vancouver, Canada.
According to the report, Dornan, who will play BDSM-obsessed billionaire Christian Grey, and Johnson, who will star as sexually inexperienced college graduate Anastasia Steele, will be shooting “exterior shots” in the city’s downtown area for two weeks. “The downtown Miami skyline looks a lot like downtown Vancouver,” a production company rep reportedly told the publication. The duo will then reportedly travel to Tenerife, Spain in February to shoot “honeymoon scenes.” For those unfamiliar with the series, the fictional couple does not wed until the third and final book, “Fifty Shades Freed.”
James, the 50-year-old author behind the best-selling series, has yet to comment on the rumored reports. The British writer previously confirmed to a fan on Twitter in August 2012 that she had high hopes the series would be made into three seperate films. “[There will be] three films, hopefully. :)" said James.
“Fifty Shades of Grey” is currently scheduled for a February 13, 2015 release.

Take this with a pinch of salt... but fans are already freaking out. We need a 'Fifty Shades' tag to keep track of this mess, y/y?