Charlie Sheen has sent the rumour mill into overdrive after claiming that he has got married.

He posted a picture of the pair together outside the former French consulate building in Reykjavík, where a 1986 Cold War summit was held between then US president Ronald Reagan and USSR leader Mikhail Gorbachev.

Charlie wrote on his Twitter page: 'This is the house ware M Gorbachev R Reagan did some epic. it's also where S and I GOT MARRIED! c #RumorMilUhPede. (sic).'

'S' is a nickname used for 24-year-old Brett, who also goes by the name Scottie.

If the couple's marriage is legit, that makes Brett Charlie’s fourth wife.

Such a union would be all the more remarkable as it only emerged the pair were dating in November.

Earlier that day, Charlie paid another romantic tribute to his 'wife', uploading a picture of her sniffing a rose, and writing: 'Jus wen ya thot the "idea" of a perfect rose was bred by an ordained magistracy of all things groovy SHE arrived. (sic).'

Charlie is a father to five children - daughters Sam, nine, and Lola, eight, with Denise, four-year-old twins Bob and Max with Brooke, and 30-year-old Cassandra Estevez, whom he fathered with former high school girlfriend Paula Profit. 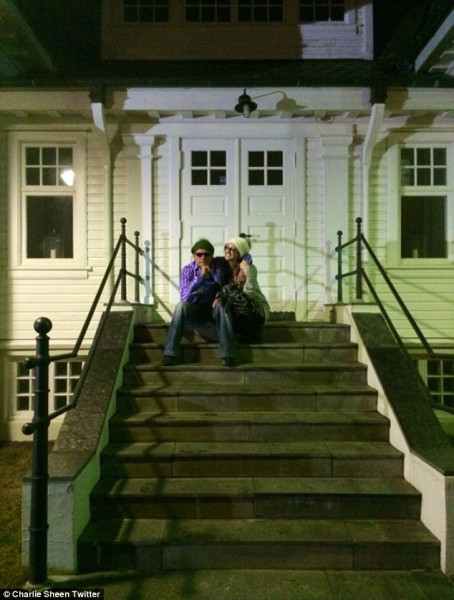