Ke$ha has been involved in a nasty fight with her record label boss Dr. Luke, which may have added to the pressure leading her to voluntarily enter rehab for an eating disorder and other problems, according to a source.

The continuing label battle was evidenced when the pop/rock singer released the latest video for “Dirty Love,” a song off her new album Warrior.

Curiously, ’70s rock icon Iggy Pop, who featured prominently on the album version of the track was AWOL in the video. Even the lyric he sang was gone. Ke$ha cited Pop as a major influence for her sophomore release.

Ke$ha noted when she dropped the video on YouTube, Dec. 31, that it marked her directorial debut. That’s because she made the video without Dr. Luke’s approval, the source said.

“She likely had no legal right to use the album version, so she used the Iggy Pop free original demo instead,” the source added.

“She’s fighting to break free from her controlling label boss Dr. Luke, so she made a video of a rock song to defy him. She wanted Warrior to be a rock album.

“He was the one who insisted on dance and electro songs. She’s been in open rebellion against him for a year and the Free Kesha Luke creative freedom movement is getting bigger and more aggressive,” the source added.

Warrior, didn’t’t come close to matching the sales of her debut album Animal, although that’s not all that unusual for a sophomore album. That may have led to friction with her label.

The album is known for it’s heavy rock-influenced sound, although it’s still basically classified as electro-pop with a decidedly dance vibe.

The 26-year-old singer raised eyebrows in April last year when she revealed her dramatically slimer shape before appearing at the MTV Movie Awards. She shocked the audience by lighting up a cigarette on stage, according to Celebrity Health & Fitness, which tracks celebrity health issues.

She look at least 25 pounds heavier when she was spotted in a bikini on an Australian beach in 2012.

There are also claims being made that apparently Dr. Luke is one of the reasons for Ke$ha's sudden check into rehab. According to sources he called her a "refrigerator" on the set of the Die Young music video, among other things throughout her career. This was all but confirmed by Ke$ha's mother on twitter: 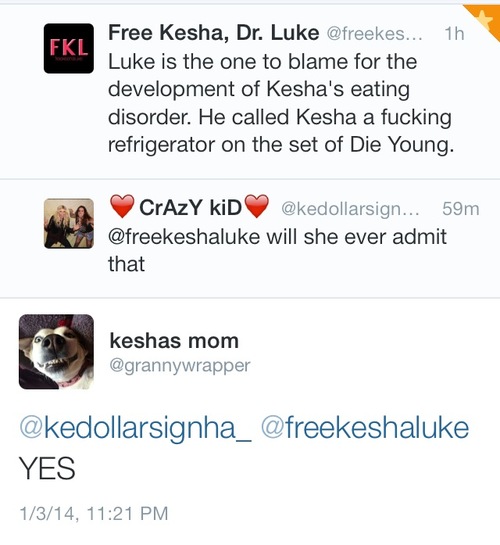 There is also a "Let Ke$ha have creative freedom" petition which seems to be getting a lot of attention lately, if you'd like to sign the petition click here including a "Free Ke$ha from Dr. Luke" movement which was shared by Ke$ha's mother. You can watch the video here

Ke$ha is a real sweetheart, and I truly wish her all the very best!