'Interior. Leather Bar.' Reviews Are In: How Did James Franco Do?

Remember that time gay icon James Franco made a movie about S&M and gay sex? Now it's time to see it! 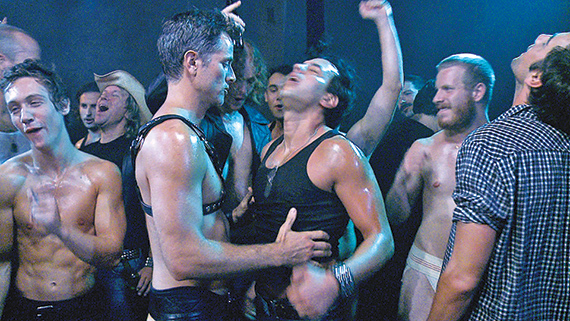 "Interior. Leather Bar." had its premiere in the New Frontiers program at the Sundance Film Festival last January, and now, a year later, the film debuts in select theaters.

Franco co-stars as himself in the documentary-style movie, in which he attempts to recreate 40 minutes of ultra-explicit footage deleted from 1980's "Cruising," a psychological thriller starring Al Pacino. It's about filmmaking as a creative process, the experience of an actor and, yes, the depiction of hardcore gay sex.

In case anyone got beyond the words "James Franco" and "gay sex" and still needs to know more before rushing out to buy a ticket to the Franco-directed flick (co-directed and written by Travis Mathews), MTV News has a roundup of the reviews to gauge how Franco's project was received.


Surprise, Surprise
"Franco's work often deals with issues of public image and exposure — as 'Filmspotting: SVU' podcasters Matt Singer and Alison Willmore recently observed, a frequent Franco character in film and on TV is a fictionalized version of himself — and with 'Interior. Leather Bar.' Franco examines Pacino's journey while adding another entry in his ever-expanding catalog of Things You Wouldn't Expect a Major Movie Star To Do." — Alonso Duralde, The Wrap

Something to Say
"Like the Oscars and Oz, any given project need only give this star something to do. Franco, smugly po-faced throughout, regards his efforts here as nothing short of noble, as if his ineffectual gestures toward the 'crisis' of heteronormativity promised anything but self-satisfaction. Rarely has liberal guilt animated self-righteous invective so vigorously." — Calum Marsh, The Village Voice

Is He?
"Mathews (an openly queer director who shook up the LGBT fest circuit with his art-porn feature 'I Want Your Love') ... focuses on Franco as the pic's more marketable meta-subject. Recognizing how the 'is he or isn't he' debate has dogged nearly all of Franco's recent art projects (beginning with his blatantly homoerotic NYU student short, 'The Feast of Stephen'), Mathews attempts to shift the attention onto Franco and his creative process." — Peter Debruge, Variety

The Second Coming
"Even when Franco is prattling on about his burning desire to liberate moviegoers from their psychosexual chains — as if he's the handsome film star equivalent of Lawrence of Arabia or the guy from 'Avatar,' a straight messiah-liberator helping the impotent queer nation touch hearts and minds — it somehow works. It's self-aware and self-deprecating." — Matt Zoller Seitz, RogerEbert.com

Let's Be Real
"Offering a lower nutjob-entertainment factor than Franco's recent festival exploit 'Francophrenia,' but more credible as an artistic statement, the film isn't as provocative as some may expect, which will probably suit the actor's fans just fine. (Speaking of Francophiles, let's get it out of the way: Franco himself participates in no makeouts — gay or straight, explicit or chaste — here. He doesn't even take his shirt off.)" — John DeFore, The Hollywood Reporter

I feel like he's starting to slowly become more comfortable with his sexuality tbh. Like I don't think he's gonna hide behind movies much longer
(no subject) - (Anonymous)

idgaf because i need dat franco experience regardless

drownsodapop
January 4th, 2014, 08:09 am
I'm a huge Franco fan and I genuinely don't believe he is... but then again, one of my best friends partied with the ATL Twins and **according to their shady asses, he's allegedly bisexual. But I honestly don't know if I even buy that story, so.
(no subject) - (Anonymous)

bigbranch
January 4th, 2014, 02:11 am
Franco himself participates in no makeouts — gay or straight, explicit or chaste — here. He doesn't even take his shirt off.

Everyone other movie I like that explores the relationship between two men just sort of alludes to gayness but never crosses the actual line.

licktheabortion
January 4th, 2014, 02:14 am
It's at 50% on Rotten Tomatoes, and not likely to go higher. But did anybody seriously think this was going to be good?

thecanuckian
January 4th, 2014, 02:22 am
please. we have some standards. this movie was made for twentysomething straight white girls
(no subject) -

Must be a tough world for you.

syvlie0o0
January 4th, 2014, 02:15 am
Franco seems totally asexual to me. Like I know he's had long term girlfriends in the past, but I can't imagine him being interested in anyone other than himself.

daisyissosilly
January 4th, 2014, 02:27 am
There's a difference between asexual and autosexual/narcissistic...

i always get this icky~ feeling whenever he does anything remotely involving queer people / media and idky. something just feels... disingenuous, to say the least. even his random "i'm going to kiss a guy in the middle of the city streets while pretending not to pose for a 'candid' camera" picture felt more trashy and insulting than beautiful or whatever he was aiming for.

even when his projects don't fall under the dictionary definition of fetishization (so pretty much his few queer projects that don't involve sexualization), it still feels like he regards queer people as a type of sub-culture instead of being regular people. or like that the idea of queer people/actions is some type of special snowflake unicorn muse to ~inspire~ his ~provocative projects~

sense_ofelation
January 5th, 2014, 11:52 am
also, when franco is such an attention whore himself it's hard to say he doesn't do stuff like this just for the attention. again, disingenuous.

But, uh, apparently it's not playing anywhere in New Jersey.

Where can I watch this shit online?

viva_espanyol
January 4th, 2014, 02:39 am
Franco himself participates in no makeouts — gay or straight, explicit or chaste — here. He doesn't even take his shirt off.