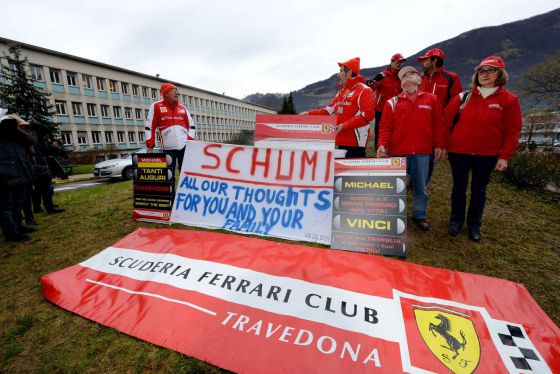 Fans of Michael Schumacher are converging on a French hospital to mark the injured F1 legend's 45th birthday.
Ferrari clubs from France and Italy are gathering outside his hospital in the city of Grenoble.
On Thursday Schumacher's family thanked fans for their "great support" and described the German as a "fighter".
The most successful Formula 1 driver in history is in a medically induced coma after suffering head injuries while skiing in the French Alps on Sunday.
He remains in a stable but critical condition, his manager has said. Supporters plan to hold a one-minute silence outside the hospital.

Dressed in red, the colour of Ferrari's famous racing cars, some fans waved flags and sang Happy Birthday to Michael Schumacher as they arrived or brought him cards to mark the day he turns 45.
Others were more sombre. One woman cried as she shared her memories of the most successful F1 star of all time and said she was still in shock following his accident. 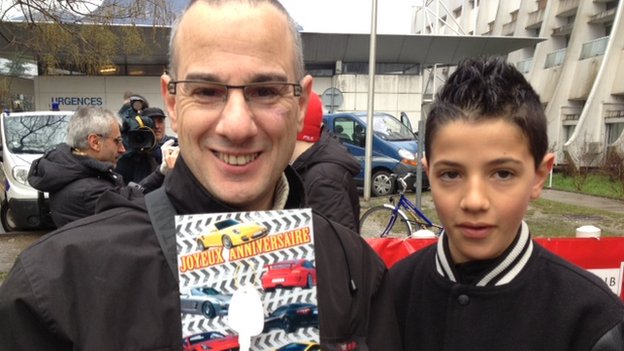 David Cacciatore and his 12-year-old son Samuel brought a birthday card for Schumacher
Many spoke of the irony that a driver who regularly risked his life on the race track ended up so severely injured on a family skiing holiday.
Their presence will be an ongoing comfort to the star's family who remain by his bedside and have already thanked fans around the world for their many messages of support.
The German champion, who retired in 2012, had been skiing off-piste when he fell and hit his head. His helmet cracked on impact after hitting a rock.
Ferrari - the racing team with which Schumacher had 72 of his 91 F1 wins - said in a statement that it wanted to send him very special wishes for his birthday as he tackled "the most important fight of his life". 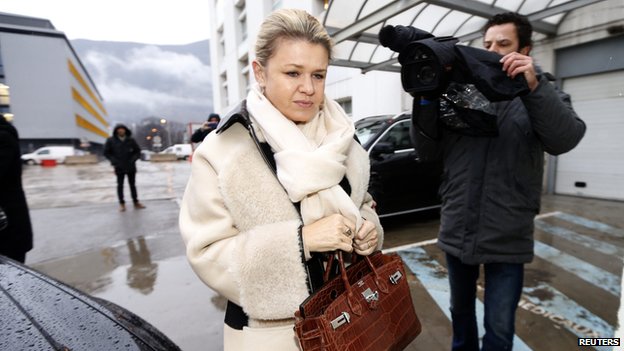 Schumacher's wife Corinna and family have thanked fans for their support
Doctors confirmed on Tuesday that Schumacher had shown signs of improvement, but was still "not out of danger".
They ruled out giving a prognosis for his condition in the coming days and months.
But it is medically possible for someone to spend several weeks in an induced coma and fully recover from it.
Spokesman Renato Bisignani said people were being encouraged to dress in red and bring flags, as "a sign of closeness to Michael Schumacher, done in a very respectful way". But the spokesman insisted that the event was not about promoting the Ferrari brand or its clients.
"We will make sure we remain sensitive at this difficult time," he said.
Michael Schumacher retired from F1 for a second time in 2012. He won seven world championships and secured 91 race victories during his 19-year career. The driver won two titles with Benetton, in 1994 and 1995, before switching to Ferrari in 1996 and going on to win five straight titles from 2000. He retired in 2006 but made a comeback in F1 with Mercedes in 2010.
After three seasons which yielded just one podium finish, he quit the sport at the end of last year. 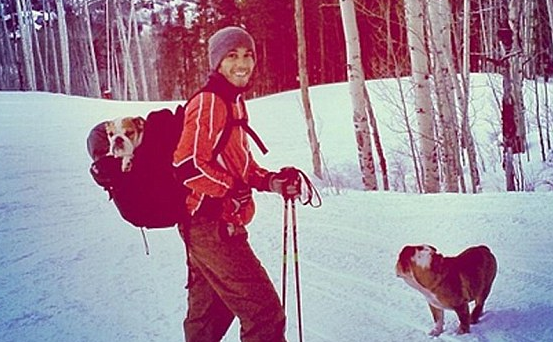 Lewis Hamilton came under fire yesterday for posting photographs of his ski holiday online while Michael Schumacher lay fighting for his life in a coma.
The British Formula One driver uploaded pictures of his Christmas break on the slopes within days of Schumacher’s horrific ski accident in the French Alps.
Displayed via his Instagram account, the images show Hamilton, 28, smiling as he skis cross-country with one of his beloved pet dogs in his rucksack.
He was criticised on Twitter for not wearing a helmet and for his ‘insensitive’ timing.
In another photograph he is  seen wearing a helmet as he stands on the piste with his younger brother Nick, 21, who suffers from cerebral palsy.
On social media sites such as Twitter and Instagram, some  users said the photographs were in ‘bad taste’. 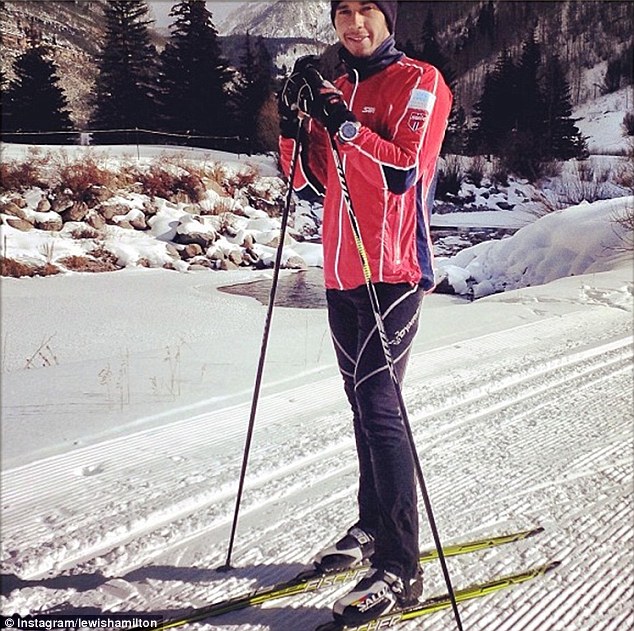 Comments included ‘Shame on you’ and ‘very insensitive given a certain ex race driver’s current condition in hospital’.
Another wrote: ‘He really should think a little and take these down before it harms his good name.’
However, the majority of comments were supportive of the Stevenage-born racing driver. 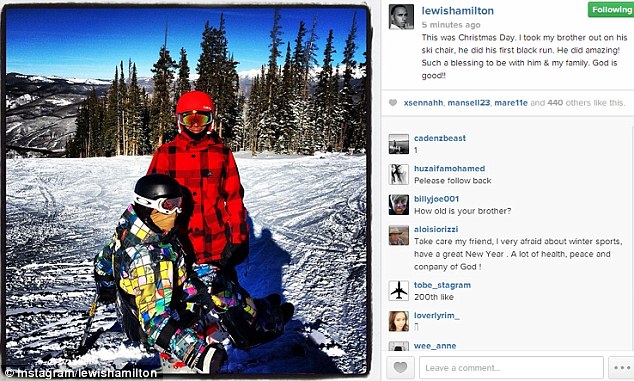 One user wrote: ‘He has only posted one photo of him skiing and in that he had a helmet on. The other photos are of him hiking or cross-country skiing or walking. Is everyone to stop posting photos of snowy vistas or skis full stop? Grow up please.’
Another said: ‘He’s walking on snow. Not skiing. The others are cross-country which is like walking on snow too. Michael’s injury is awful but that shouldn’t stop anyone else enjoying the snow.’
Others explained that helmets are not usually worn for the activity. ‘Cross-country skiing is like “going for a walk” and you do not wear a helmet. Even not in competition,’ one wrote.

Earlier in the week, Hamilton posted a get well message for Schumacher on Twitter, whom doctors yesterday described as being in a stable condition.
Hamilton said: ‘Mine & my family’s prayers & thoughts are with Michael & his family. I wish him a quick recovery. God Bless him. The Hamiltons.’
Seven-time champion Schumacher, who turns 45 tomorrow, is fighting for his life in a Grenoble hospital after falling and hitting his head on a rock in the resort of Meribel on Sunday. He was airlifted from the ski run by a rescue helicopter, suffering from devastating brain injuries.
Schumacher has since undergone two operations to relieve a blood clot and pressure on his brain.
Sabine Kehm, the German sportsman’s manager, said yesterday: ‘Michael is monitored all the time, his condition was stable all night and this morning. It has not changed. It is too early to provide any further details.’
Doctors have said the retired Formula One driver has showed signs of ‘slight improvement’, but remains in a critical condition.
His family, including wife Corinna, 44, and their two children Gina-Marie, 16, and Mick, 14, have kept a vigil by his bedside since the accident.
It is not known where Hamilton was on holiday, but he flew there in a private jet with his two pet bulldogs shortly before Christmas.
People always say the first 48 hours are the most critical, so i hope he recovers. / Hamilton's haters can diaf. He might be reckless and a flop, but he isn't "insensitive".