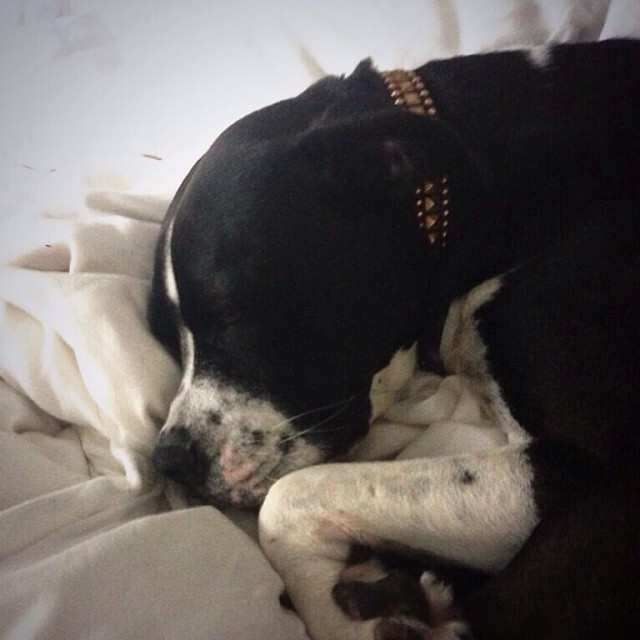 ONTD, has your dog ever been racially profiled?

I had a dog for two weeks as a kid. She was brown and didn't assimilate properly so we sent her back.

she was only seven, completely fine until a few days ago. she was only staying at the vets overnight for fluids, but we got the call this morning

sprty
December 27th, 2013, 08:22 am
the loss of a pet is such a significant, penetrable pain and i'm sorry you're having to go through this.

stephaniebrown
December 27th, 2013, 09:53 am
we have no idea yet :( she was diagnosed with epilepsy in july, and she was totally fine up until she had her first seizure in months on tuesday. she was having trouble walking around and the vets did tests on her but couldn't see anything wrong with her except that she was dehydrated, so they thought it might've been an effect of the seizure? so they kept her in overnight to put her on fluids and stuff but then she passed away during the night :(

kimit
December 27th, 2013, 12:39 pm
That happened with my parent's last dog. She was fine one day and then the next she started acting weird, walking in circles, drooling, not eating, getting these like, nervous ticks. So we took her to the vet and they decided to keep her for the night and she died the next day. It was horrible.

giantbutts
December 27th, 2013, 07:05 am
not gonna touch the terrible/awkward/ignorant word use

but props to her for pointing out the discrimination and cruelty against certain dog kinds. i say that as someone who's been bitten by a rottweiler as a kid, still think that the ginormous quantity of pitts being put down everyday is horrifying.

slightly off-topic but jw are there any US states that forbade selling of cats and dogs in pet stores? toronto did and imo it's a good idea at least temporarily (not judging ppl who got their pets in pet stores btw, just think that adoption should be #1 priority for a long while)

giantbutts
December 27th, 2013, 07:12 am
oooh that's great to know :D
I think there are fewer pet shops than before in my town. way more no-kill shelters too! one step in the right direction, at least

dumpweeds
December 27th, 2013, 07:18 am
california, I think. I've never seen a pet store that sold cats and dogs but I saw them in arizona and texas iirc
(no subject) -

mistycreed
December 27th, 2013, 08:49 am
I live in Tennessee and they don't sell pets in my area. They hold adoptions a few times a year, though.

peddlestools
December 27th, 2013, 03:19 pm
idk, but all the big box stores (petsmart, petco) i've been to have dog adoption drives on saturday and partner with local rescue groups to keep adoptable kitties in their stores. i know the rescue group i got mine only lets the cats stay in the stores for a certain period of time (3-5 days?) before the foster mom takes them back home. i actually met the cat i wanted to adopt at her home and then i had a second meeting at a big adoption drive at a pet store (i think it was petco), so i could hang out with her in one of the private adoption rooms. she sat in my lap, and i decided to take her home right then. it took her less than a week to attach to me, and now she cuddles with me all the time and greets me at the door :)
(no subject) -

abbie
December 27th, 2013, 07:05 am
My dogs know true discrimination </3 They're not allowed in parks or public places and in my culture they're considered 'unclean' :( I just took them to the beach where no one bothers us barring that... doggy treadmill. The middle east is very impractical for dogs.

omgwtfbbqpewpew
December 27th, 2013, 07:12 am
Lol. This reminds me; some Muslims tend to overreact a bit when it comes to dogs. I know they're seen as 'unclean' in our culture but, like, there's no need to act like they've all got rabies or something when they come near you.

I quite like dogs, especially corgis and golden retrievers.

abbie
December 27th, 2013, 07:19 am
That's what we do! Especially in the summer when it hits 105 degrees.. But we stick an ipad there so they can watch DogTV. Plus they have way more fun than that one lol.

... I COULD walk her more frequently but a doggy treadmill seems a lot easier. lol..
(no subject) - (Anonymous) Expand
(no subject) -

quiet_storm
December 27th, 2013, 09:27 pm
I watched a show where a Muslim guy was getting a service dog and his Mum ended up really liking it even though she was so worried about it coming into the house. His mosque were also really supportive and provided a cage for it to wait in while he prayed.

morgan90
December 27th, 2013, 07:05 am
Every discussion on pitbulls gets derailed by a deluded pit owner who goes on about how their dog is a PRECIOUS LITTLE ANGEL THAT WOULD NEVER HURT A FLY~~~~

They're all angels until they aren't. A dog is an animal, not your fucking baby.

homicidalslayer
December 27th, 2013, 07:10 am
Dogs may not be babies (they're much more useful) but they are generally nice until

1. They're hungry.
2. They're scared.
3. They've been horribly abused by human beings training them to be killers.


is pretty logical. No-one keeps an animal near their kids, pretty confident in the fact that it will attack them. It's a shock every time.

But yes, I agree, every time this comes up we just get flooded with pictures of pit bulls near babies, with owners insisting that it's the gentlest dog in the world and therefore there's a conspiracy against pitbulls.

mrcumberbatch
December 27th, 2013, 10:28 am
mte like someone one the first page was all 'i feel sorry for you guys that u dont know true animal love and woldnt let your dog alone with your baby' but its like.....everyone whose baby was attacked by a dog thought like that too?!!

distant_lines
December 27th, 2013, 07:26 am
But that does't have to do with the breed…it has to do with them being animals. If you train a dog properly they aren't going to go on the attack for no reason. If you own a dog and have children, I think it's a parent's responsibility to train the dog properly and also raise the kid to know you can't just go hit the dog or do whatever to it, they need to be nice to the dog. It's like a sibling. If you hit your sibling enough times, they're gonna hit back. It's the same with a dog, although it's obviously going to be worse than a kid hitting another kid. That's why training and education is so important.
(no subject) - (Anonymous) Expand
(no subject) -

upood
December 27th, 2013, 09:06 am
except we're highly similar, the only difference is dogs cannot verbalize their shit so their instinct to defend is to get aggressive. if you love and care for your dog, children or not they will be loving to you.
(no subject) -

sixdemonhag
December 27th, 2013, 09:08 am
Every major dog organization, plus the CDC and the AVMA agree that breed is not a reliable indicator in dog bite incidents. What are very reliable indicators are reproductive status, socialization and environment. One big issue is that people will say something is a pit when it is no such thing.

I've had 14 dogs in the last couple decades, including 3 pits. My kids were raised around dogs, were never bitten by dogs, can deal very well with strange dogs and my daughter is actually a dog trainer now. I'm hardly a deluded pit owner. Of my current four dogs, including 3 pits, the only one I know would bite an intruder is my border collie/rat terrier mix. He's a scary motherfucker. My other dogs are child's play.

xbellaxmiax
December 27th, 2013, 01:28 pm
dogs DO NOT attack for no reason. i don't have a pitbull, but i have a 120lb rottweiler, who yes, is a precious angel who would never hurt a fly. why? because we have properly trained and socialized him. he has been taught since birth how to act and live among people and other animals and so has grown to be an extremely calm and gentle creature. the people who are shocked that their animal attacked clearly don't know their animal and also clearly never took the time to properly train them.
just because they're animals doesn't mean their actions are random or can't be explained. if you don't know how to train a dog, then you shouldn't own one. problem is many people think they know how to train an animal when they really have no clue.

"A dog is an animal, not your fucking baby." that's so stupid. my dog is my baby, and i love him, take care of him and protect him like my own baby. i hope one day i can love a child like i love my dog, but i doubt it tbh

britneys
December 27th, 2013, 07:05 am
My friend's drug dealer has the sweetest pitbull. I assume he wanted an intimidating pet, but it's just so wrinkly and adorable.

holdmedownxx
December 27th, 2013, 07:09 am
my friends who live in a shit part of town kinda did the same thing lol. but this pit will go up to anyone and attack them with love

kweenbeyonce
December 27th, 2013, 07:06 am
Literally no one knows what racism is istg. Jesus Christ.

I'm dog sitting right now (a golden) and he's sleeping next to me and his head is on my chest. It's the cutest lil thing <3. I love all dogs tbh.

but.. what the fuck, Miley? What is this racisms words? WHat is this sentance? You're a weirdo. Also I'm high of meds and Miley sounds so weird to me right now

sorry if i make no sense