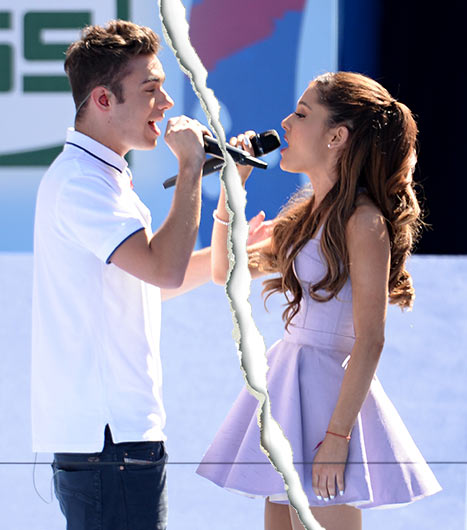 Nariana is no more. Ariana Grande and Nathan Sykes have split, multiple sources confirm to Us Weekly.
The singers, both 20, broke up a few weeks ago, one insider tells Us. "They just weren’t into it anymore."
Us first broke the news that Grande and Sykes were dating back in August after releasing their duet, "Almost Is Never Enough," for the film The Mortal Instruments: City of Bones.
They then confirmed their relationship status via Twitter in September after the two were caught on camera getting cozy together at Disneyland. "So, I guess it's obvious now . . . thanks to everyone who is being so lovely. I'm so happy #butweareterrified #pleasedontkillme #orariana,” wrote The Wanted singer.
"He's the sweetest. He's amazing. I have to say, he's one of the most talented vocalists I've ever heard in my life," the “Popular” singer gushed to Access Hollywood in a September interview.
In her Teen Vogue February 2014 cover story, Grande opened up to the mag about her relationship with Sykes: "It’s not as tough as people would think,” she explained. “We have the same music manager, so we can see each other’s schedules and plan little trips as often as we can.”
A source close to the boy bander, meanwhile, tells Us the couple “hardly ever saw each other” and are currently on a break.
The iCarly star, meanwhile, hinted at the possibility of a split during a radio interview with Florida’s 93.3 FLZ last week. "You’re a little behind," she responded when asked about her boyfriend. "We’re really good friends," the singer with the powerhouse vocals added.