Suge Knight: Call Me A Ni**a, Not An African American 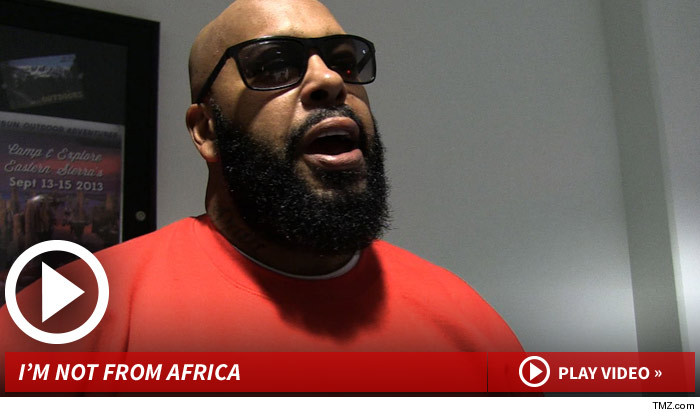 Suge Knight is offended when people call him African American, because he's NOT African. On the other hand, he doesn't have a problem with the word, "Ni**a."

Suge says it's offensive to label all Black people African American. And he goes further ... he thinks it's ridiculous that only rappers can use the word, "Ni**a." He thinks if it can be used by some, it should be used by all.

At first his theory sounds a little shocking, but maybe he has a point.

calinewarkwc69
December 16th, 2013, 11:18 pm
omfg, the first comment is "Ive seen a lot of these posts now and my only questions are why do y'all ( the posters) always say "white kids"? Why can't they just be "kids"? What difference does race make in this situation?" and 9 people liked it. With their FUCKING NAMES out there too... I hope someone makes it their personal responsibility to find these people on campus, walk up to them and go "NO! You're stupid. STAWP!" hand them a pamphlet or something, and then leave.

fionaapple
December 16th, 2013, 11:22 pm
Jarod A. Goodwin
"Not your word" I didn't know I was supposed to be given permission by everyone in the whole world to say a word? The use of the word at all by ANYONE, should be frowned upon. I've always thought that if you didn't want people to say it in the first place then let no one use the bloody word.

When I was a kid and people found out that I am partially German, for a while there I was called a Nazi constantly just because of my heritage. You don't see me going around calling all of the other Germans Nazis. My point is, if you don't want people to say the word in the first place then don't use it at all in the first place.

The whole political correctness thing should just be dropped also, don't call someone an African American or a Caucasian or an Asian, just call them a person. Don't label in general.

I just read more.. this Jarod kid is so messy
Jarod A. Goodwin
You have to stop holding on to this word as something so negative, stop trying to change the meaning or simply use it for any reason at all. Racism is a mental thing, it exists because it is constantly talked about.

If someone killed my family because we're white or because we're christian I wouldn't get all racist about it, I wouldn't turn racist because of it. What I would do, and I would tell it to their faces, I would forgive them. For each bullet or strike they shoot out at someone because of racist reasons, I would offer them a hug. Racist people are hurt people,so instead of trying to punish them for being assholes, how about doing the honorable thing? Smile at them and act like nothing happened at all, even though it may hurt, smiling at them or going for a hug, that is what will change it.

I don't say this because "I am white, and I don't know what it's like blah blah blah." or because I grew up in a christian household. I say it because I am an evolved human being, who doesn't care about labels but sees people for who they are as a person.

saintvlas22
December 16th, 2013, 11:41 pm
Racist people are hurt people,so instead of trying to punish them for being assholes, how about doing the honorable thing? Smile at them and act like nothing happened at all, even though it may hurt, smiling at them or going for a hug, that is what will change it.

celtic_thistle
December 17th, 2013, 03:45 am
lmao sit the fuck down Jarod, your parents couldn't even be bothered to spell your name right. What a stupid little shit who's missing the point by a few thousand light-years. I can't.

facedancers
December 16th, 2013, 11:23 pm
omg that Becky in the post saying "I hate talking about this b/c it's controversial!1!" so many hot messes in there

juunanagou18
December 16th, 2013, 11:23 pm
I love how the first damn comment was "Why do you have to say WHITE kids??" Um, because white kids are the only race of kids dumb enough to think the n word is a term of endearment for everyone?
(no subject) -

sadisticsidhe
December 16th, 2013, 11:14 pm
Uhh. I try to respect how people want to be identified but if a black person told me they wanted to be called that instead of African-American, I couldn't do it. I have several friends who don't like being called African American for similar reasons but they prefer to be referred to as black not the N word.

arisma
December 16th, 2013, 11:28 pm
I'm with you on that one. Even if that's what someone hypothetically wanted to be called I just couldn't do it.

What is so damn hard about calling people by their name?

xoxgoodbye
December 17th, 2013, 01:50 am
I had a friend who called kept calling my bffs "African-American" (we're Canadian, mind you) and they kept insisting him to just call them black because they absolutely hate the term African-American, but the guy would not budge because he didn't want to offend them by calling them black,

I get what he's trying to say about the African American part but anyone with a shred of common sense shouldn't be taking advice about the n-word from this piece of shit.

Are you surprised by both?