Champions League round of 16 draw. 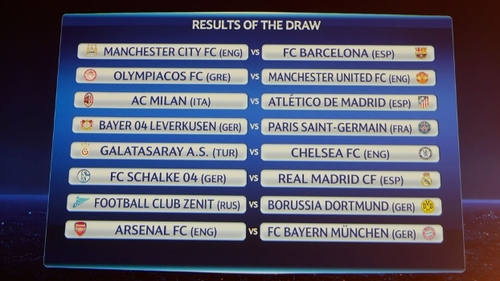 Arsenal and Manchester City paid a heavy price for finishing second in their Championls League groups when they drew Bayern Munich andBarcelona respectively in the last 16 of the competition.

The other English clubs, having topped their groups, have, on paper at least, been handed easier ties. Manchester United will play Olympiakos while Chelsea will face an old friend in Didier Drogba as they were drawn against Galatasaray.

For Arsène Wenger's team it will be a repeat of last season's meeting in the last 16, when the eventual winners eliminated the English team on the away-goals rule. Bayern won the first game at the Emirates 3-1 before losing 2-0 at home with Olivier Giroud and Laurent Koscielny getting the goals for the visitors, the latter with four minutes of the tie remaining.

Since then, Bayern have swapped their coach Jupp Heynckes for Pep Guardiola but have not stopped winning. They are unbeaten in the Bundesliga, although they did lose there final Champions League group game against Manchester City last week.

City's last-16 draw, meanwhile, will cause further scrutiny of Manuel Pellegrini's concession that he was unaware another goal at Bayern Munich would have won the group phase and avoided playing a side of Barça's status. City beat Bayern 3-2 in last week's final group match, after coming from 2-0 down after the opening 12 minutes. But Pellegrini later admitted he did not know a fourth goal would have pushed the holders into second place and allow his team to win their section.

While there was no guarantee that City would have managed a fourth, finishing second in the group meant they would face one of Real Madrid, Barcelona, Atlético Madrid, Paris Saint-Germain or Borussia Dortmund.

"Very tough, we are happy because we are here and we will fight for the trophy, but it's true that it could be maybe better," City's director of football Txiki Begiristain, who held the same position at Barcelona and spent seven years as a player with the Catalan club, told Sky Sports.

While Pellegrini has dryly laughed off his ignorance by apologising for not being able to score four goals at the home of the European champions, privately he may feel otherwise.