Has American Horror Story Taken Its Tastelessness Too Far?

It took 10 episodes, but American Horror Story: Coven finally shorted out my brain. 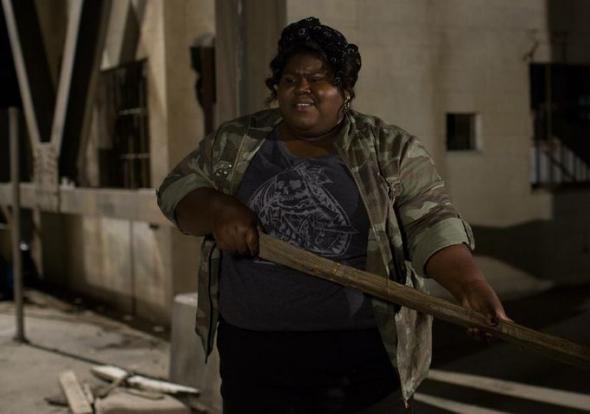 This season began in antebellum New Orleans, with the sadistic Delphine LaLaurie (Kathy Bates) torturing slaves in ways so horrifying that I don’t want to have to write them down again. But as the season has progressed, race and slavery have taken a backseat to campy coven business—young women walking around in black hats, looking elegantly goth while chain-sawing zombies, having threesomes with Frankenstein monsters, engaging in general internecine witchfare.
With just three episodes left, though, Coven took a hard U-turn toward its initial subject—and maybe smashed into a wall. I find myself in a position I don’t often publicly (or privately) admit: I don’t know quite what to make of it. What does it mean to find a sequence from a show in terribly bad taste when that show’s raison d’etre is laying waste to decorum?
Before describing the scene, some necessary background. For her heinous crimes, LaLaurie was cursed by the voodoo queen Marie Laveau (Angela Bassett) with eternal life and then buried alive for 150-plus years. Recently disinterred by Fiona Goode (Jessica Lange)—the egomaniacal, murderous leader of the descendants of the Salem witches—LaLaurie was forced to serve Queenie (Gabourey Sidibe), the one black woman in the otherwise lily-white Salem coven. She and LaLaurie became friends of a sort, bonding over fast food and hitting up drive-through chain restaurants late at night. Disconnected from her white housemates and wooed by Madame Laveau (who despises the Salem witches), Queenie decided to decamp to the voodoos—on the condition that she bring LaLaurie with her. LaLaurie quickly revealed herself to be as racist as ever, and Madame Laveau, aware of LaLaurie’s despicable past, cut off her head.
As this week’s episode begins, LaLaurie is decapitated but sentient, her headless body desultorily brushing off black flies in the backroom of Madame Laveau’s beauty parlor. Laveau orders Queenie to burn the head, but Queenie doesn’t want LaLaurie to die so racist and ignorant. She sets out to educate her—by showing her Roots. This bit feels less like American Horror Story than Glee: It reflects an after-school special perspective—everyone can be redeemed and learn something—instead of the horror point of view—No. They. Can. Not. (It also reeks of Glee’s self-aggrandizing faith in the power of pop culture above all else to open minds.)
Are there terrifying, soulless bogeymen out there or aren’t there? Last season, American Horror Story: Asylum repeatedly hollered yes, giving us an insane rapist serial killer, a Dr. Mengele, even the devil. This season, the woman (LaLaurie) who sewed a man’s mouth around excrement because she thought his skin color precluded him from humanity contains multitudes, while—as Kera Bolonik has comprehensively demonstrated—Bassett’s Marie Laveau has been presented as the least sympathetic of all the witches, even though she’s the only one with right (and a moral code) on her side.
Anyway, all of this is not even the crazy part. LaLaurie refuses to watch Roots, closing her eyes and talking over the dreaded “jungle” music. And so Queenie puts on something LaLaurie can’t shut her eyes to, forcing her to listen to the spiritual (and civil rights anthem) “Oh Freedom.” It works. Lalaurie begins to cry, unable to deny the humanity of the singers. But as the song continues, the show cuts downstairs, where a vengeful white witch-hunter (Josh Hamilton), who Madame Laveau originally hired to kill the Salem witches, bursts into Laveau’s home and mass-murders almost all of the voodoo witches, until Queenie, a human voodoo doll, shoots herself—and therefore the witch hunter—in the head. To underline that: A white man bursts into a black woman’s home and slaughters a number of black people to the lyrics, “And before I’ll be a slave, I’ll be buried in my grave, and go home to my lord and be free.”
Last season, when American Horror Story: Asylum briefly resurrected Anne Frank, I argued that its bold, shameless appropriation of every and any thing, especially those topics that feel too serious and fraught for it to safely touch on, was what made it so powerful. Is there any American nightmare more potent at this moment than the one about white people dismissing, denigrating, and murdering black people for no reason and with no consequences? Set a scene about exactly that to “Oh Freedom” and you have some pretty radical social commentary for Wednesday nights at 10 p.m. Unless it’s just radical hot-button pushing.
At the end of the episode, Madame Laveau, who has previously scorned Fiona’s condescending offers of partnership, shows up at the Salem witches’ door, so reduced by her solo bid for power that she is ready to form some kind of alliance. The black and white witches are finally primed to unite against the all-male witch hunters. With three episodes left—and a Stevie Nicks cameo to take place—American Horror Story: Coven is poised to tell a story about girl power. But it might have lingered on black power a little longer.
SOURCE