The 5 Most Undeservedly Hated Famous People of the Year

It's December, which, among lots of other things, means fans of Internet entertainment should brace themselves for a veritable onslaught of lists of the best and worst things of the year that has almost passed. Cracked does them, and so does just about everyone else. These ubiquitous lists can attribute their massive popularity, at least in part, to the howls of outrage from readers who feel wronged when something they love is excluded from the "best of" roundups or earns a mention on the "worst of" side of things.


One such list, the 20 Most Hated Celebrities of 2013, as decided by the always reliable Star magazine, has been making lots of headlines this week. At least it's made enough headlines that it caught my attention, and when I read it, I spotted a few entries that struck me as more than a little unfair. Naturally, because there is no bigger affront in all the world than reading something you disagree with online, I decided I needed to say something.

Here are the five most undeservedly hated celebrities of 2013.

Like most of the other problems in the world, the fact that Kim Kardashian is still making "most hated" lists in 2013 is probably Kanye West's fault. To be upset over any of her other perceived crimes against pop culture, like being famous for doing nothing (except Ray J) or sullying the airwaves with an inane reality show, is like being mad at the year 2007. These are things we should have all spoken our piece about and moved on from by now.
Even then, I've never completely understood the frothing rage some people seem to be able to work themselves into at the mere mention of Kim Kardashian. I'm not saying the concept of being famous just for being famous is a good thing; I'm just saying I don't give a shit. Tons of people her age live off their parents' money without doing half the work she's done. I don't care if photo shoots and running a clothing line doesn't amount to back-breaking work. It's still work. If laziness in the face of a financial windfall from her parents is what upsets you about Kim Kardashian, I'd like to introduce you to at least half of Los Angeles.

Kim Kardashian is a fucking workhorse compared to a lot of rich kids, even if it doesn't necessarily feel that way when you're dragging ass to a day job you hate. Again, though, famous just for being famous is a problem we inherited from the last administration. As stated previously, the thing keeping Kim Kardashian in the celebrity-hating community's cross hairs these days is her relationship with Kanye West. If a melding of two of the most "newsworthy" celebrities in all the world strikes you as reason to be upset, rest assured, you're viewing the problem in the completely wrong way. Let's say you have two friends, a man and a woman, who both buy you a birthday gift each year. One day, that man and woman meet and become a couple. What happens the following year?

Right, you get one less birthday gift, because your friends are now shopping as a couple. That's exactly how you should think about Kanye West and Kim Kardashian joining forces. Instead of hearing an obnoxious story about Kim Kardashian every day and an obnoxious story about Kanye West every day, now you just get one joint story about both of them. In total, that's one less piece of "news" each day.
It's the same thinking that goes into keeping the president and vice president in different locations during times of crisis. If they're separated, it's harder for the enemies of this country to take out our number one and number two at the same time. If you view Kim Kardashian and Kanye West as enemies fighting against your right to hear meaningful news reports, having them joined at the hip should be exactly what you want.

Here's a fun story! Back when I was working for Playboy, a freelancer turned in an article about why Taylor Swift was secretly the biggest dick in music. Anyway, because that's exactly my kind of shit, I approved the article posthaste and published it on the site. Approximately 10 minutes later, I received an email from my boss demanding that I take the article down. People loved Taylor Swift so much (this was hot on the heels of the Kanye incident) that seeing her described as a "dick" in a headline, no matter how compelling the argument contained within the article may have been, was too much for such a demure company to stomach.
And now here we are a few short years later, and Taylor Swift is one of the most hated celebrities of 2013. That's a squandering of goodwill the likes of which we haven't seen since George W. Bush managed to make the entire world hate us after 9/11. If you're keeping track, that's two Bush jokes in the span of three entries. That's the kind of mindset having to still talk about Jay Leno puts a person in, I suppose. The public's hate for Taylor Swift, though, is still awash in that new love affair scent. Hating Taylor Swift is cool now, because, oh my God, does she have to write a song about every guy she dates?

Well, yeah, she kind of does. Rather, she doesn't have to, but why in the fuck shouldn't she? For one thing, relationships are something musicians have been covering in song forever. It seems like a problem here because everyone knows who she's singing about, but how is that her fault? Lots of easily entertained people want to know that kind of information. Why does that equate to Taylor Swift not getting to write the same kind of songs that so many men and women before her have written? The video for Justin Timberlake's "Cry Me a River" made it pretty clear who he was singing about ...

... and there has yet to be an instance in recorded history of anyone being mad at that guy for anything. So why all the guff when Taylor Swift does the same thing? Is it because so many of her songs are about ex-boyfriends? If so, and I can't reiterate this enough, the fact that you even know who she's singing about is the real problem here. If you're that concerned about Harry Styles' (whoever that is) right to privacy, read better websites and watch better television. If you do that, the problem will just work itself out, I promise. 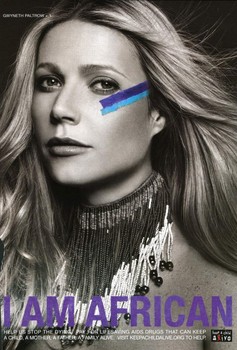 Gwyneth Paltrow, apparently, is the most hated celebrity of 2013. Once again, this is according to Star magazine, and Star ain't never lied about nothing. This isn't a huge shocker; people have hated Gwyneth Paltrow for a long time now, but the demographic that generates the majority of the anger aimed in her direction is a bit of a surprise. To put it bluntly, it's women. Well, women and Soren Bowie, but mostly women.
I say that's surprising primarily because of why people hate Gwyneth Paltrow. From everything I've been able to gather, aside from occasionally and unfortunately getting a bit too comfortable with the N-word, Gwyneth Paltrow's main crime is that she talks too much. She has a goofy website where she catches hell for recommending items that fall outside the purchasing power of the average American (a $450 leather tank top, for example). The nerve! In this economy, no less! Speaking of that stupid hat, is Gwyneth Paltrow really the "racist" Jay-Z connection people should be worried about when the company he's partnered with is sending the cops after anyone who "looks like" they can't afford to shop there? Also, has there ever been an issue of Maxim that didn't think you should own a piece of $15,000 stereo equipment?
What I'm saying is, celebrities endorsing shit the average person can't afford is not a recent phenomenon. It's just that, for some reason, Jay-Z gets to call it an album while Gwyneth Paltrow gets ostracized. Furthermore, those recommendations she makes come by way of an email newsletter. If you don't want to be sold on the merits of expensive bath towels or whatever the fuck, avoiding it is as simple as not giving Gwyneth Paltrow your email address.
Beyond that, let her recommend whatever the hell she wants. I know, it's terrible that she doesn't look or live like the average woman, but that doesn't mean her right to say the same dumb shit as everyone else, man or woman, should be diminished in the slightest.
Granted, there's also another slightly more legitimate gripe against Gwyneth Paltrow, which is that she's legendarily smug and pretentious. It's a reputation she earned by way of quotes like these:

"I'm probably one of the best ... But it's not that big a deal. It's not like this is the greatest swath or generation of actors that has ever come down the pike."

"Look, even if I don't get [an Oscar] directly, eventually they're just going to have to give me one when I get old. So no matter how you slice it, I'm getting one."

"I do like a bit of Jung, and it was just this kind of numinous thing."

It's easy to see why hearing Gwyneth Paltrow speak inspires rage in the masses when you read those quotes. The only problem is, those quotes didn't inspire rage in anyone, because, no matter how appropriate they look plastered across her face in LOLCats font...

... those quotes didn't come from Gwyneth Paltrow. They're from one GQ profile of Robert Downey Jr. from back in May 2013 that, as this Vulture article rightly pointed out, is practically the textbook definition of inaccessible or snooty or whatever other adjectives people tend to attach to Gwyneth Paltrow.
I think this raises an obvious point. Maybe we don't hate Gwyneth Paltrow too much after all. It could just be that, at any moment now, we're all going to collectively realize we hate Robert Downey Jr. too.

Just joking, he's a dude. As long as he keeps his punches contained to other (straight) dudes and his slurs contained to his own race, we'll let him get away with just about anything.


+ Jay Leno and Ashton Kutcher at Cracked!
I think there are legitimate reasons to not like all of these people, imo... Which celebrities are undeservedly hated on ONTD?
Tags: ashton kutcher, gwyneth paltrow, kanye west, kardashian / jenner, late night talk show, taylor swift
Subscribe