Selena Gomez was NOT lip syncing at Jingle Ball! 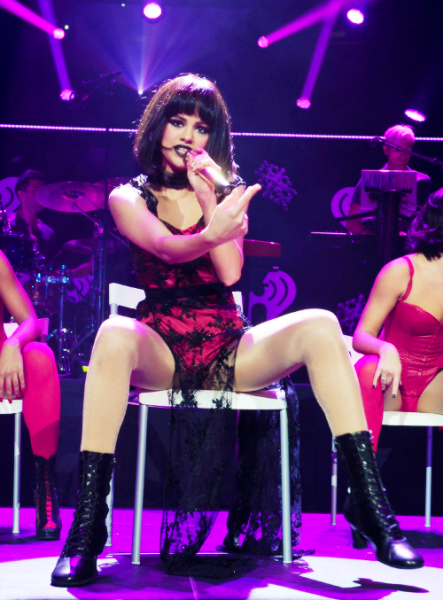 Selena Gomez got caught up in a bit of a lip syncing scandal at LA’s Jingle Ball over the weekend – but we are here to explain exactly what happened. To make it clear: she was not lip syncing.
Our man Dave Styles also works for KIIS FM in LA, and he was doing all the on stage announcing for the Jingle Ball. He was side of stage when Selena performed, and on Sunday’s show he told us the truth about the incident.
And it all comes down to her in ears, which artists use to listen to themselves sing while they’re performing.
Dave said, “The ear pieces inside - they’re called in ears - they were having issues, I don’t know if they were off or just too loud sometimes. So she had to pull them off. So she couldn’t really hear.
“A lot of people I’ve noticed saying that she lip synced, and I can tell you she did not lip sync. She was not lip syncing. But she did come out and say ‘sorry we’re having audio issues’. The audio issues she was referring to were the in ear things.”
But what about the video that shows her swearing? That did happen, and Dave saw it all.
Dave said, “What happened is, the first song stopped, the lights kind of went quiet for a minute, she walked to the back of the stage and she yelled ‘What the ****!’ And unfortunately that was still on mic. The best part was, after all that, you can clearly tell she’s mad. The lights came back on and she had to smile.”
Watch The Video From Selena's Performance
There you go – straight from the source. Keep your eyes on thehothits.com this week because we spoke to Selena ourselves and have a great interview to share with you.
Listen below to find out what else happened when Selena was on stage. (Video at source)
Source
Tags: selena gomez
Subscribe