we were so beautiful ( 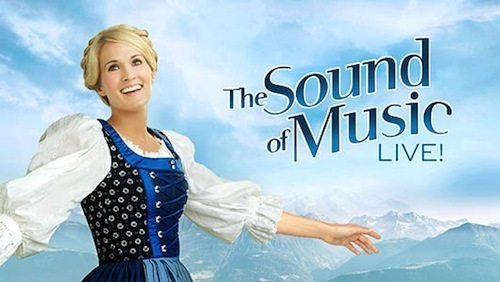 DiGiorno Pizza live-tweeted the entire broadcast, becoming a surprise star of the night.

NBC's Sound of Music Live has finally been unleashed.
The production, starring Carrie Underwood and True Blood's Stephen Moyer, cost nearly $9 million to produce -- and caused quite the stir on Twitter, inspiring several trending hashtags and a flurry of tweets.
The surprise winner of the night? DiGiorno Pizza, which tweeted a dozen or so pizza-musical mashups, such as "Dough, Ray, Me = Pizza party with me and a guy named Ray. #TheSoundOfMusicLive," and "Can't believe pizza isn't one of her favorite things smh."

Read some of the evening's best tweets below.

YOU ARE 16, GOING ON 17 AND I'M ASSUMING YOU'D LIKE PIZZA FOR YOUR BIRTHDAY DINNERRRRRRR #BuyDiGiorno #TheSoundOfMusicLive

HOW DO YOU SOLVE A PROBLEM LIKE MARIA? GIVE HER PIZZA FOR GOODNESS SAKES #TheSoundOfMusicLive

Still not over pizza getting overlooked in the favorite things song. #TheSoundOfMusicLive

Habits off to the entire cast/crew of @SoundofMusic Nice work to you all! #pulleditoff #hardtodo #talentedpeeps #SoundofMusic

The Sound of Music: the feel good family musical of the year about leaving your fiancée to boink the nanny.

If they cast #SOML from @nbcparenthood: Peter is Von Trapp & @maebirdwing and I are the wacky nuns who steal the car parts at the end.

Tonight our culture is divided. those watching the sound of music live and there are those of us who are going to @RiffTrax live

This is the most disconcerting TV-G rating in history. #TheSoundOfMusicLive pic.twitter.com/5cAi1SsIBQ

Stay tuned for the live after show TALKING SOUND.

Driving home, the dude next to me had an anti nazi air freshener hanging from his rear view mirror. #SoundofMusic pic.twitter.com/vHbCnzHuPv

Are you REALLY gonna take relationship advice from a lady who was a NUN a few weeks ago and now just married your dad? #TheSoundOfMusicLive

Ok, people I'm 1/2 bottle of Malbec in & have been #SoundofMusic crying for 90 minutes- I need my #Gladiators! Who's with me for west coast?