Paul Walker: Finally had "his time" with daughter, F&F costars react to the news & share memories

Paul Walker Biggest Tragedy: Finally Had ‘His Time’ With Daughter Meadow
Paul was developing a touching bond with his teenage daughter after she recently moved in with him. HollywoodLife.com learned that not only is Paul’s family still in shock over their tremendous loss, they are absolutely heartbroken that ‘his time’ with his daughter was cut short.

Paul Walker‘s tragic Nov. 30 death is especially heartbreaking since his 15-year-old daughter, Meadow Walker, had just moved in to his California home from her mother Rebecca McBrain‘s home. Paul had always been a big part of Meadow’s life, but a special father-daughter relationship was budding between the two when they were together full-time. As his family grieves his untimely death, learned that they also mourn the tragedy that Paul finally felt he was getting the extra time with his girl he always wanted.

“Everyone is in shock still. The worst part is that he was finally getting his time with Meadow,” a source close to Paul’s family told HollywoodLife.com after Paul was involved in a horrific car accident on Nov. 30. ”He was happier than you can imagine to have her living with him full-time. She was the love of his life, he was an amazing dad and he was so happy that she chose to live with him because he never felt like he got enough time with her.”

“They were like two peas in a pod, they loved hanging out and playing video games or basketball or going to Disneyland,” the source explained. “Paul was a big kid so being with Meadow was playtime for him. And she was a total Daddy’s girl, she adored him.”
Paul Walker’s Family: ‘Paul Was An Incredible Human Being’

Paul’s family is, understandably, in shock after the horrific accident. “This still doesn’t feel real for anyone,” a source close to Paul’s family told HollywoodLife.com. “Meadow is getting help but it’s still just the first stages, she’s going to have a long road ahead. This is a huge loss for everyone, Paul was an incredible human being. We still don’t want to believe that its true.”
Source

The Fast & The Furious cast react to the tragic news

My heart is hurting so bad no one can make me believe this is real Father God I pray that you send… http://t.co/CnKblb3PWu 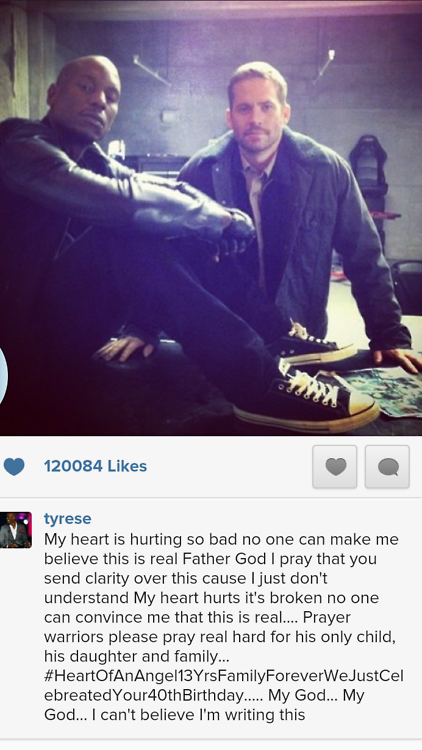 At least I got to say I love you.... #OurLastExchange but our laughs and moments will live forever… http://t.co/LyNrYK0r44

We made moment count couldn't get anything done cause we were having too much fun http://t.co/Qv2cGONMHo 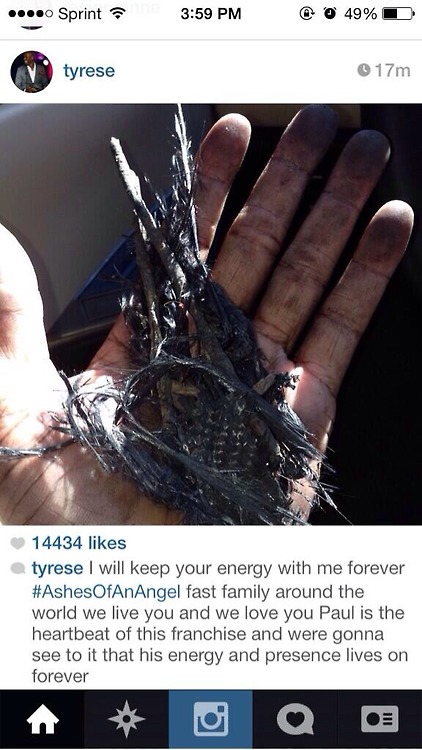 All my strength, love & faith to the Walker family during this heartbreaking time. We find our strength.. in his light. Love you brother.

Paul was pure light. I cannot believe he is gone.

Lost a dear friend today. So sudden and tragic - @RealPaulWalker was a great man with a big heart and passion. RIP pic.twitter.com/wpaAZcwuxk 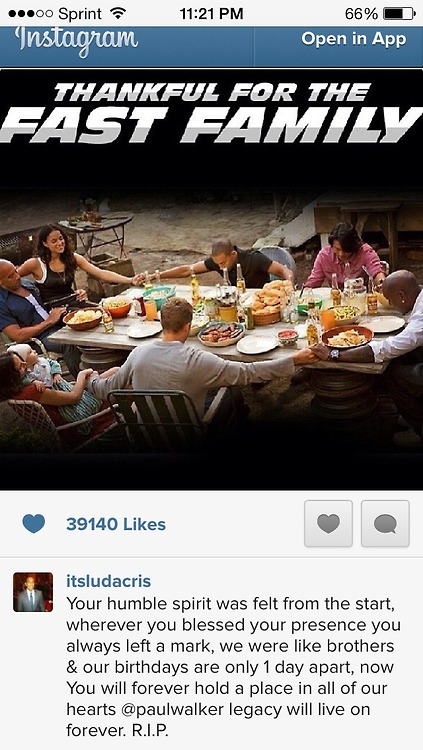 I am in total shock at the news of Paul's death. My heart,strength and love goes out to his family. A truly honest h… http://t.co/8M0G7vfLYH

I am so beyond heartbroken right now. I can't process anything.