Liam Hemsworth is getting along just fine as a bachelor these days. Five years after moving to Los Angeles to start an acting career --- and 2 months after he and Miley Cyrus officially parted ways -- the Hunger Games: Catching Fire star is finally beginning to feel settled in Hollywood with two feet placed firmly on the ground.

"I'm more comfortable in my own skin than I've ever been in my whole life," the 23-year-old actor tells the Associated Press in a new interview. "Over the last five years I've learned so much. The first few years in LA were really tough and scary, but I had to figure things out for myself."

And it seems he did, but only after a highly publicized split from his former fiancee. The Australian hunk recently called it quits with the 20-year-old "We Can't Stop" singer in September after more than three years together. That same month, he was caught making out with Mexican actress Eiza Gonzales in Las Vegas.

"I know I'm a good person and these days I feel like I'm more centered and grounded than I've ever been," he said. "What I always keep in mind is that I know what the truth is and that's all that matters."

But why the new outlook now? It turns out, his costar Jennifer Lawrence has a lot to do with it! "For a few years I went down a path where I forgot to be in the moment and enjoy the moment," he admitted. "But being around someone like Jen, who is so honest and laughs all day long, I am forced to be in the right now. I'm much happier."

The Hollywood star also seems to be focusing on more extracurricular activities, including kick-boxing. "I don't fight people," he reassured. "It's a mental release to go and beat the (expletive) out of a bag for an hour." He added: "I read a lot of Zen books. And I grew up surfing, so that has always been my escape."

ms_mmelissa
November 22nd, 2013, 02:18 am
The first few years in LA were really tough and scary, but I had to figure things out for myself.

Riiiiight. Wasn’t he living with Miley, who was already an established star, during that time?

He was actually the controlling one in the relationship...... allegedly

larrylurker
November 22nd, 2013, 02:25 am
lol, did he have a problem with floating before or something

squishinator
November 22nd, 2013, 02:25 am
well if he wants to a new extracurricular activity, i am available.

Waiting on his fifteen minutes to be up, tbh.

booneral
November 22nd, 2013, 02:47 am
i've found him to be so much more attractive lately, he seems to have grown a personality recently lol

handsdowntoo
November 22nd, 2013, 02:57 am
Hasn't he been in several bar fights and he goes on here about kickboxing but not fighting people? Probably better to fight them in a gym then drunk out.
(no subject) -

smokesinatra
November 22nd, 2013, 02:57 am
"For a few years I went down a path where I forgot to be in the moment and enjoy the moment," he admitted. "But being around someone like Jen, who is so honest and laughs all day long, I am forced to be in the right now. I'm much happier."

this seems a bit shady idk. it's probably honest but yikes

smokesinatra
November 22nd, 2013, 03:03 am
yeah I mean the implication here is pretty strong, lmao. there's a chance he didn't mean it that way but if he didn't he needs to choose his words more carefully imo... but if he DID mean "miley made me not enjoy myself for years" then, well, uh, message received
(no subject) -

samrockwell
November 22nd, 2013, 07:12 am
i think he's totally into her. it seems like she makes it really clear she just sees them both as brothers, but from his comments and how he acts with her on the red carpet he doesnt see it the same way
(no subject) -

blrocks
November 22nd, 2013, 03:04 am
I don't even think he has a chance with her at all tbh. I think this is strategic to get him a little more press, by maybe stirring up some rumors about these two. Jen is a lot of things but she seems totally uninterested in having attention on her relationships.
(no subject) - 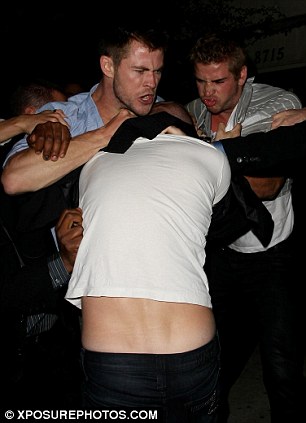 did ontd have a post about this???? I need to find it