First off, let me just say I'm a huge fan of Lady Gaga. She first garnered my attention when she attended the LGBT Equality March on Washington back in 2009. Initially, I was impressed right off the bat, and I was later blown away by the subsequent release of her album Born This Way -- as well as her ensuing onslaught of publicity for the cause LGBT equality. So I was looking forward to her new album ARTPOP with anticipation but sadly I have been surprisingly disappointed. There are definitely a few tracks on the album that are praiseworthy but on the whole the album seems to be missing some essential ingredient.

Chris Bosman of Consequence of Sound gave what I consider quite an astute assessment with his review of the album:

At her peak, her mishmash of European dance music, American pop, '80s Madonna, glam Bowie, hair metal, Giorgio Moroder and The Killers sounded both reverently referential and ahead of its time. The hype that combination commands is always followed by the expectation of further exploration. Instead, Gaga has added only a few by-the-numbers modern elements to that initial formula... That refusal to experiment as wildly as she once did reads as fear, and a pop star who's afraid ends up sounding like the once-weird Lady Gaga does on ARTPOP: boring and normal.


She must have a very wrinkly portrait in the attic! Make up free Madonna, 55, shows off her almost unbelievably youthful skin

In Oscar Wilde's novel, The Picture of Dorian Gray, the chief protagonist sells his soul so he can remain eternally youthful and gorgeous.

Instead, a portrait in the attic carries the signs of the years for him; it's a fantastical (and allegorical) tale but looking at Madonna as she jetted out of LA on Monday, such witchery seems possible. The make-up free 55-year-old didn't look a day over 30 despite having shots taken at extremely close quarters while she dashed through the west coast airport.

Tight, taut and incredibly even in tone; the superstar would be the envy of many younger woman looking this good on the trot.

Madge, who sometimes gets it so, so wrong, was even rocking a black outfit that you'd expect to see on a much younger woman with aplomb. 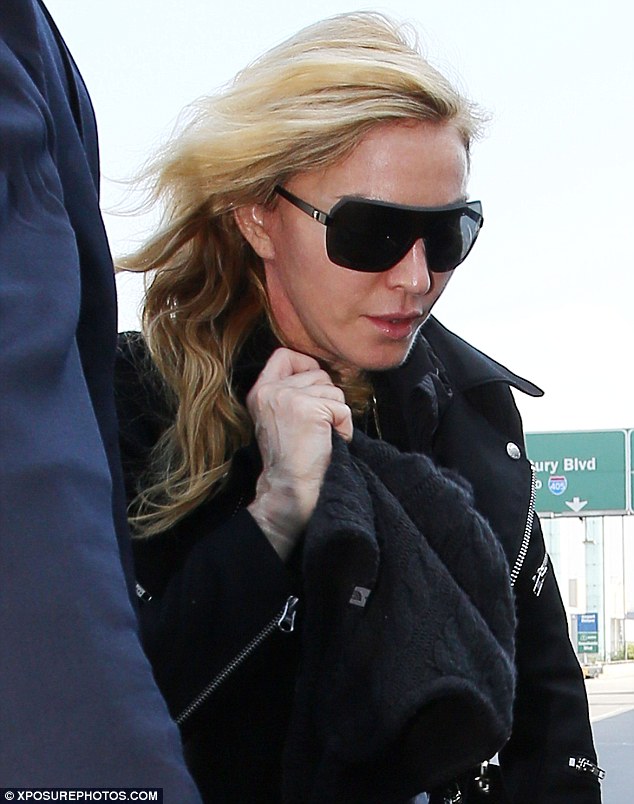