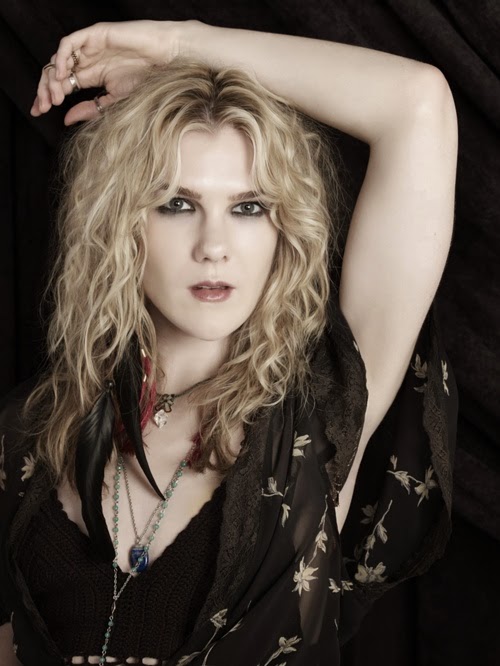 Lily Rabe has been a member of Ryan Murphy’s unofficial American Horror Story repertory company since the onset: In Season 1 (Murder House), she was Nora, the mother to a baby comprised of dead body parts; in Season 2 (Asylum), she was the sweet-turned-satanic Sister Mary Eunice, a nun possessed by the devil; and now, on the FX series’ third season, Coven, she’s playing Misty Day, a tender-hearted witch, who lives in the swamps of New Orleans and whose only friend is Stevie Nicks (whom she’s never met).

But, that’s all about to change. Murphy announced Tuesday that the legendary Fleetwood Mac frontwoman will appear on American Horror Story: Coven later this season and as a superfan of Nicks herself, just like her character, Rabe was at a loss for words. “I can’t really talk about,” she nearly whispered from her hotel room when talking to BuzzFeed. “No, really. I can’t really talk about,” she continued, before bursting into giddy laughter. “And not because I’m not allowed to talk about it. I can’t talk about it because my palms just start sweating and my heart starts racing. I’m seeing spots actually.”

After gathering herself, Rabe, who hasn’t personally heard from Nicks since Coven premiered in October, admitted that she didn’t actually think the cameo would happen, despite Murphy’s relationship with the singer from Glee and the emails he and Nicks had been exchanging. “People kept saying, ‘Do you think Stevie will come on the show?’ And I was like, ‘What?! That’ll never happen! Of course not!’ Because that’s a sort of defense mechanism about a thing that you just really want,” Rabe explained. “It’s very exciting, to say the least.” 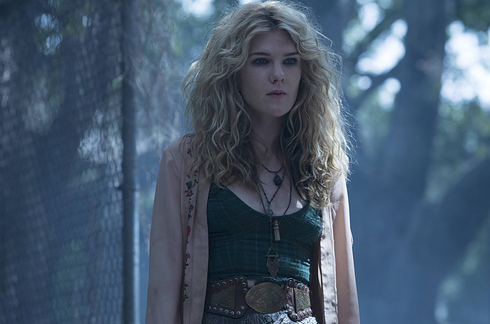 While the actress doesn’t know the details of Nicks’ appearance, it’s almost certain that she and Misty will intersect. And it’s hard to know who will be more thrilled, Rabe or her character. The actress recalled finding out that Misty would share in her Nicks obsession, noting she had no idea that’s what Murphy had planned, despite her subconscious hinting on the Asylum set.

“It was just kind of one of those wonderful, serendipitous things … I assume liking Stevie Nicks is common, like liking chocolate. There are people out there who don’t like it, but… I sort of assume that everyone is obsessed,” Rabe explained. “I had been learning the guitar last season and the one song I would sit in my trailer and play over and over was ‘Landslide.’ Maybe Ryan heard it,” she wondered aloud. “I’ve gotten a little bit of information about my characters at the very beginning of each season and that was the one thing: I knew Misty was going to be out in the swamp and I knew that she was going to love Stevie.”

Much of Coven focuses on a group of young witches in training at Miss Robichaux’s Academy for Exceptional Young Ladies, headed up by Cordelia Foxx (Sarah Paulson) and her mother Fiona Goode (Jessica Lange), the Supreme of the coven (the strongest witch of her generation). But Rabe’s outsider Misty is quite powerful in her own right.

With the “gift of resurgence,” she’s healed Kyle (Evan Peters), a frat boy who was killed in a bus accident at the hands of Miss Robichaux’s student Madison Montgomery (Emma Roberts) after some of his frat brothers gang-raped her at a party. Madison and her classmate Zoe (Taissa Farmiga) snuck into the morgue and sewed various frat boy parts together to create the character who’s been dubbed “FrankenKyle.” When they performed a spell to bring him back to life, they summoned Misty, who brought Kyle to her swamp lair. There, she healed his scars and, in the process, made a friend (albeit a mute one)… until Zoe thought it was time to return Kyle to his mother (Mare Winningham), who had nearly killed herself in the wake of his death.
Rabe was thrilled that the Coven storyline gave her the opportunity to work with Peters, but that wasn’t by accident. “I was not very subtle with Ryan about how much I was hoping Evan and I would get to do stuff together,” she said with a laugh. “It’s been really great. I love him as a person and I love him as an actor.”

On this week’s episode (SPOILER ALERT for those who haven’t seen “The Axeman Cometh”), Kyle, who’d wandered off after murdering his mother (who, unbeknownst to Zoe and Misty, had been having an incestuous relationship with him), found his way back to Misty in the swamp. Unfortunately, their reunion wasn’t wholly happy one. When Misty gave him a bath (because he looked like he’d “been rode hard and hung out wet”), it triggered a memory for Kyle regarding his mom’s sexual abuse. In a rage, he destroyed the place Misty was calling home, including smashing her eight-track player, her “Leather & Lace” tape, and thus her connection to Stevie Nicks.

“It was really heartbreaking, I think, for both our characters,” Rabe said of the scene. “Misty obviously loses something precious beyond words to her. It’s one of those things that exemplifies how you can become dependent on something and if it’s taken from you, you actually feel like you don’t know how to do anything, even the things that have nothing to do with what you lost. That was it for her, even though it’s not a person, it’s a just a thing; but it was her deepest connection to another person and her most consistent connection. She has so little to tether herself to and this is sort of the one solid thing she can count on. It really is a very hopeless moment for her and it’s one of those things that makes you feel like you have to start from a new place. Of course, what you then realize is, ‘No, of course I can still bring all of that with me. What I need is there inside of me.’ But certainly in that scene, she has no sense of that.”

Watching the tears roll down Misty’s cheeks as she stared at the smashed piece of technology was truly poignant — not only had she lost Stevie Nicks (for now, at least), but she also lost Kyle. “There’s disappointment because the relationship between Kyle and Misty is certainly the closest thing she’s had to friendship with an actual living, breathing person. There’s so many colors in that relationship — I think there’s this sort of maternal thing; I think there’s something slightly sexual in that relationship; I also think there’s a very platonic pal thing that they have; there’s a brother-sister thing. I felt like it was a really unusual dynamic and then, he’s the one who takes this thing that means so much to her. And, as out of it as he may be, and as seeing red as he may be, he still knows what he’s doing. He goes for the jugular.”

Despite her devastating loss, Misty helped Zoe (and American Horror Story viewers) gain something she’d been missing : She brought Madison back from the dead after Fionna slit her throat out of fear she was the next Supreme, leading Spalding (Denis O’Hare), Miss Robichaux’s butler, to use her decaying body as part of his bizarre doll collection. “She’s such a great character. I love Emma and I think she’s so great on the show,” Rabe said. “Personally, I’m very glad that she’s back. I think she’s just really fantastic.”

Though Rabe herself couldn’t be happier about Roberts’ return to the show as something other than a Barbie corpse, Misty’s obedience to Zoe in her own state of sorrow was admittedly disconcerting. “It’s that desperation, any sense of someone saying, ‘You belong here,’ or, ‘This is what you should do’ to sort of point her in a direction, even if just for a minute,” the actress explained. “I think when her judgment and instincts are telling her maybe not to do something, I think sometimes, that loses out [to her desire to belong]. Misty has a ton of integrity and beautiful instincts about people, but I do think her need sometimes wins out and certainly, in that moment with Zoe, especially after what’s just happened with Kyle, it’s that thing of, ‘OK, well, if this’ll [bring me companionship, I’ll do it].’ But I think that whole time, she’s really on the fence. As she’s doing it, it’s not a thrill.” 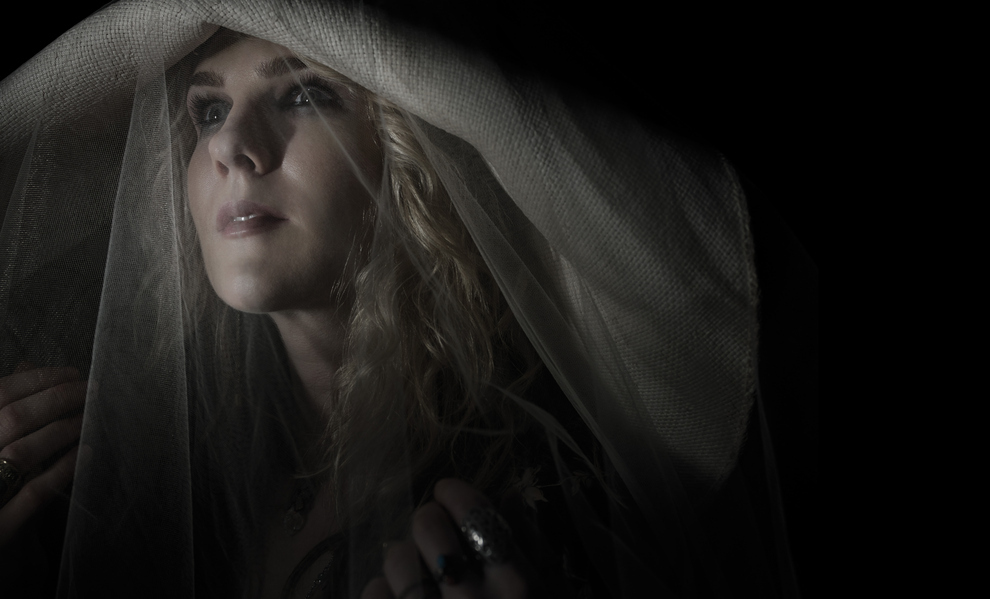 Misty’s fidelity to Zoe did pay off, in a way. For the first time on Coven, the outsider was offered to be a part of something when Zoe asked if she’d like to stay at Miss Robichaux’s for the night. Though Misty wants nothing more than to find “her tribe,” as she’s stated, she turned down the proposition. “She just has a bad feeling,” Rabe said. “There’s something so feral about her to me. She really has these animal instincts. Because we know who her one main companion is, she doesn’t actually have anyone really telling her what to do, so she really just goes with her gut most of the time to know what to do next, where not to go, and where to go.”

In last week’s episode, Misty’s gut brought her to the site where Fiona had burned her nemesis Myrtle Snow (Frances Conroy) at the stake. And this week, fans saw Misty healing Myrtle’s body with some good ol’ New Orleans mud and swamp water, hinting at a partnership in the making. “They are both such oddballs, Misty and Myrtle. Big hair, crazy, amazing outfits and also, just wildly eccentric, both of them,” Rabe said. “They really march to the beat of their own drum, those two, and I always think it’s fun when there’s interplay between characters who are really singular and also kind of loners. Myrtle’s less of a loner, but she definitely does her own thing … I love Frances. She’s such an amazing actress. I’ve loved her for so long. I was so in love with her on Six Feet Under and I’ve loved her on every season of American Horror Story … She’s so amazing on the show this year.”

Though only six episodes of Coven have aired, for some, Misty has already become iconic. See Rabe’s younger brother Michael’s Halloween costume below for proof.

“He didn’t tell me he was doing it,” the actress said, laughing. “He sent me a picture of a blonde wig and maybe I was supposed to catch on to what was happening, but I didn’t have any idea that it had anything to do with me. And then I woke up to those pictures the next day and proceeded to send them to the writers, my friends, my castmates. It was so brilliant. He made very subtle and strong choices, I would say: just the wig and black eyeliner,” she noted, unable to get through the sentence without laughing again.

Production recently wrapped on the eighth episode of Coven, and Rabe is particularly looking forward to fans seeing that installment, noting she “gets to be with more of the cast.” Clearly, she’s gotten quite good at the Murphy Method, i.e. saying very little while teasing what’s to come. Case in point: “You do find out more about certain things that have happened during the course of the show that you maybe didn’t find out fully,” she said, apologizing for being vague.

Of course, there’s also Stevie Nicks to look forward to. In talking about Misty’s continued quest to belong, Rabe couldn’t help but add with an audible smirk, “Can you imagine if Misty got to actually got to meet the real Stevie? Wouldn’t that just make it all better? I can’t. I personally can’t and I know nothing about it, but I’m just saying, ‘Can you imagine?’”